Crafting your own wax

Moderator Emeritus
Over the years I have tried and used many diffident brands of mustache wax, but for the last 3 or 4 I have been mostly using what I can concoct in my kitchen lab. Alway, of course after my wife is in bed. And I always clean up afterwards! AFter getting ready this morning, i figured I had better get busy, as I was not going to make it thru the week with what I had left. 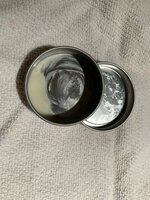 Over the years I’ve tried.
Firehouse, all 3 varieties
Oregon Wild Hair,
Lucky Tiger,
TOBS
Clubman
Lockhart’s
Cowboy Comb
Man’s Face Stuff
Fisticuffs,
Badger
Dr Ditmar
Brother’ Love
Proraso
Stern
Capt. Fawcett
Penhaligon’s Bayolea
Apothecary 87. (Terrible stuff)
Honest Amish Beard Balm and Beard Wax.
I originally tried my hand at this, when I got this big tube of Lucky Tiger. Turns out the tube was the perfect size to store a stick of Palmolive, but the wax wasn’t nearly hard enough to hold for my tastes. I got some beeswax, and so started several years of experimentation. I’ve probably never made the exact same wax twice, which shows that you don’t have to be too precise. White beeswax is always the base, along with some kind of oil,softer components, etc. I’ve use, in addition to the Lucky Tiger, Vaseline, jojoba oil, mineral oil, castor oil, and the Honest Amigh products more recently. Based on some old recipes from the Moustache Club site, I’ve even added some melt-and-pour soap base, though I don’t see much difference. Maybe I didn’t use enough. I’ve put in some Clubman wax, old lip balm, and probably some stuff I can’t remember.

Tonight I decided to keep it simple and document my adventure. I use a glass measure cup and the microwave. Probably should use a double boiler, but I’ve not had any issues with this approach, though I never take my eyes off the mixture, and usually turn off the microwave before it melts completely. The residual heat and some stirring with a wooden skewer finishes the job. From there, its into the fridge. When solid, I give it test. Although it is always better in the morning after solidifying overnight, if it’s close we are done. If not, add some more wax or whatever, remedy, test again. If it is OK tomorrow morning, I’ll reheat it and pour into various tins I have saved over the years.

Tonight I started with 16 grams of Honest Amish Beard Balm and added equal amount of beeswax. 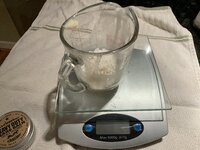 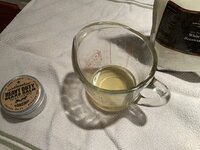 Initial test shows this is probably a little softer than I usually make, but I’ll see how it works tomorrow morning. I usually like to have it hard enough that I have to roll it wetween two fingers for a bit to soften it. ‘Tis iabout that consistency to start. If needed, I’ll add a little more wax tomorrow night. 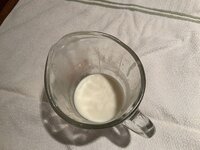 I originally tried this to make the Lucky Tiger usable, but found I was able to make a white or nearly white wax. Many of the commercially available waxes are yellow, and turn my white mustache that color. The fact that it is very inexpensive soesn’t hurt!

show us your mustache..

About 5 years ago, I decided to make my own beard balm after a commercial product (containing yellow beeswax) turned my white beard yellow. My former neighbour was into making her own lotions, so I had a source of essential oils and such to experiment with. I only had to find beeswax which I got from a local candlemaking shop (100g of white beeswax for $2.50).

Then, I looked at a bunch of websites and Youtube videos to figure out the ingredients. I ended up copying the ingredients from the stuff that originally turned my beard yellow. I substituted the white beeswax and estimated the proportions, as follows:

I added the following essential oils on my own, trying to get a smokey/woodsy scent:

I melted the beeswax, butters, and lanolin in a double-boiler on low heat. Once melted, I took it off the heat and thoroughly mixed in the oils. While still liquid, I poured the mixture into a mini-ramekin (2 oz. size?). Then, I left it overnight to harden.

I had enough wax to make three of these, so I kept one and gave the others to my cousin and a coworker to get their impressions. Well, those guys didn't like the smell; they said it was like medicine. Maybe I should have cut back on the lanolin which has a strong odour, and added more essential oils. Personally, I think it smelled mostly like beeswax, which is fine with me because I didn't want it to be too perfurmey.

Anyway, I haven't made any homemade beard balm since then. It's fun to experiment, but felt like a bit of a hassle. Some of the ingredients can be expensive, too.

You Both Can Get Off My Lawn!

Moderator
Thanks for taking the time to post this Mark!

Contributor
subscribing to this thread, interested in seeing others recipes as I might try to make some myself.

Moderator Emeritus
The wax is definitely the cheapest part!

So after using this for a few days, Iwill say the it works. Barely. It is very hard to scrape out of the tin, but then is soft without any working between fingers. In my experience, that is what I saw when there was castor oil in the mix. I will need to check the ingredient list of the Beard Balm I used.

M last batch I used both Honest Amish Beard Balm and Wax, so maybe adding some of the wax will help the consistency without making it too hard to work. I used to make a very hard wax, and would hold it up to the incandescent bulb in the bathroom fixture above the sink for 30 seconds. Sadly, new light fixture and no more incandescent bulbs.

I also have some coconut oil to try adding. I may also try adding the soap base first just to see what effect if might actually have if any.

Moderator Emeritus
I was out of town most of last week using this version of the wax. Too hard to scrape out, and then was immediately soft. Barely OK. Unfortunately while I was away my lovely bride "cleaned out the residue" at the bottom of the cup and washed it. My fault since I didn't put it away our of sight!

So I mixed another batch. 5g of beeswax and 5g beard balm, and then added 10 grams of the melt-and-pour soap base to see what it actually did. To my surprise, it does make it a little easier to scrape out. It also needs just a little warming to completely soften, and does not adversely effect the hold. I'll use this a few days and then tweak it again.

Contributor
Ive been making chapstick, beard balm and beard oil. Wife makes sugar scrubs. I have everything I need to make wax but I have a month oldntin of firehouse tacky. It is doing the part for my dark brown three inch English handlebar.

I've tried some wax recipes, all were too soft and mostly balm. Not enough wax. I try to avoid a lot of coconut oil. I'm not a fan of the scent. I ordered some lanolin and need to try a few more ratios. Probably won't happen until work slows down after New Year's Eve.
You must log in or register to reply here.
Share:
Facebook Twitter Reddit Pinterest Tumblr WhatsApp Email Link
Top Bottom