So I received a Parker slant razor from a men or here, and first wanted to thank him for the good deal.

Secondly after shaving with it, I really like it. So what Slant razor in your opinion is the best and why?

Btw unrelated but I can’t say enough to all those I have purchased from. I have t seen a feedback thread but so far I give 5/5! Genuinely thank you from the bottom of my heart. I understand I purchased for asking price (besides one for $1) but I feel all have been fair deals.

I like my Ikon X3, RazoRock 37 "Merkur clone", and my Parker. Ikon is probably my favorite, as it is efficient but also very friendly. Merkur slants are also great. Lastly, ATT makes a very nice slant as well.

I've only got the Merkur 37C and it's my favourite.

Try an ultra light one like the PAA Alpha Ecliptic or bakelite open comb slant. Merkur 37 would be my normal suggestion, but that won't bring much difference compared to the Parker.
Should you want to spend more money you could have a look at the ATT S1, where personal preference goes strongly toward the stainless one, a lot more pleasant in my hands than the aluminum.
Should you be ably to get your hands on an iKon 102 slant or their original slant, also not the X3 (too boring for me) you should certainly try them.

My favourite slant is a Hoffritz which I was lucky enough to obtain in the original case with some blades. To be honest it is the only slant I have tried and since I am not buying any more razors this year then I am unlikely to try another any time soon. I love the build quality, the short thick handle, and that it adds a bit of variety to my routine. Not been able to find out much about the age of it.

The Merkur 37 has been around practically forever. As I understand it, the Hoffritz slants were made by Merkur under contract. It's a similar design with different finishes. The Merkur 39 is the same head design as the 37, but with longer, heavier handle.

I have the Razorock German 37 which shaves almost the same as the older Merkur slants, except it is a 3-piece design (instead of 2-piece). It is possible to buy just the German 37 razor head by itself so you can use it with any standard razor handle you want. So, in a way, I have a razor that mimics both the 37 and the 39.

My favorite slant combo is the German 37 head with the Razorock HD handle. I also have the Razorock Super Knurl handle and Bulldog handle. It is one of the best performing razors I have and it was very inexpensive.

FaTip is coming out with a slant razor soon. I have no idea what that will be like, but I really like the FaTip Grande.

My Walbusch B5 is my best shaving slant

I've only used Razorock German 37. At first, didn't quite like it - it seemed that it just wasn't able to produce the shave quality I expected. However, once I switched it from Feather and Astra to Parker and Derby blades, it became better... go figure.

Right now, I am perfectly content with it. I can get a clean, smooth BBS shave with very little trouble, and this is the first razor I am thinking of using if I had a troublesome shave the day before.
M

I have been using the Merkur 39c for a few months and loved it. I recently purchased the RR Wunderbar and couldn't be happier. It is a bit more efficient than the merkur, but also more aggressive. You really need to pay attention while shaving or you'll get bit. But I have gotten some great shaves with it! 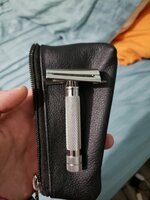 My favorite slant is the RR Wunderbar. It provides me with an effortlessly smoother shave everytime. The best shaves are with the Astra blades. The feather blades on the wunderbar are not as smoother as the Astra.
C

Of the four or five slant's I've used, my favorite is my Fasan, made in Germany around WW2. It can bite, but is extremely smooth and efficient when handled with a bit of care. Also, I like its appearance it has a metal handle while the head is of bakelite or some such material.
B

efsk said:
Should you be ably to get your hands on an iKon 102 slant or their original slant, also not the X3 (too boring for me) you should certainly try them.
Click to expand...

Would have thought the 102 would be tagged as the boring one as it's more of a modified SB. Agree that bakelights are an interesting way to switch things up.

Moderator
Mine is the ATT S-1. Smooth and efficient.

ackvil said:
Mine is the ATT S-1. Smooth and efficient.
Click to expand...

+1 Mine is the ATT Atlas S1 Slant as well. It does take me 4 passes to BBs, but the smoothness is unparalleled and it is efficient as well. I have gotten some fantastic shaves with the ATT S1. A real joy to shave with and awesome daily driver! Here is todays SOTD, 1.11.2020 : 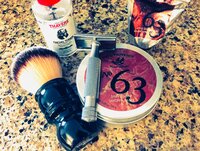 Among them I like Razorock German 37 most. I also bought a second one as a backup. It is very comfortable and efficient. If it could be corrected the blade alignment problem automatically, it will be perfect razor for me.
Last edited: Jan 22, 2020

Contributor
I have the 37c and have been using it for months and its my daily driver. I got rid of my other razors when I got it. (Except my 23c, my first razor)

I will be giving my opinion on each one after February.

Actually, I hear they may make as many as TWO very nice slants. Following ATT's taxonomy, "S1" is a safety-bar helical slant, while "S2" is their open comb helical slant. I own an S2. I have not (yet) tried an S1, and may not. One of the posters above referenced four passes with one. I get a stellar shave in 2 passes with the S2 and an Astra blade.

Like @Umma2gumma says it's the one I reach for if I got a rough ride from another razor.

I also have a PAA Oxblood Bakelite Alpha Ecliptic slant. This is a tilted slant instead of a helical. It works well -- about like a regular DE for me because it IS a regular DE mounted slantwise on the handle. PAA also occasionally offers this razor in 7075 aluminum. The most interesting thing about this razor is it has the domed cap "shaving guide" that some of the older slants also have.

I'm a bit picky. I like stainless razors, not plastic or aluminum. I like helical slants over tilted slants. I like open combs over safety bars. Like just about everyone I started shaving with a Merkur, and may pick up a 37C to try just because I am also a bit nostalgic. It may not change my life but I feel like I should at least check if off my dance card.

But I'd throw all that pickiness straight out the window if I was looking at a Wahlbusch B5 in pristine condition. It's all kinds of "wrong:" bakelite, Zamak, tilted slant. But by golly it's adjustable and that is just so inexpressibly cool...

I wouldn't hock my teeth for one, but I wouldn't negotiate too hard either.

My 2 favorites are the Ikon Wunderbar and Ikon B1 both with the DLC finish.

EclipseRedRing said:
My favourite slant is a Hoffritz which I was lucky enough to obtain in the original case with some blades. To be honest it is the only slant I have tried and since I am not buying any more razors this year then I am unlikely to try another any time soon. I love the build quality, the short thick handle, and that it adds a bit of variety to my routine. Not been able to find out much about the age of it.

This one is truly an awesome razor. I have one, too, except that it's a bit more modern, branded Merkur, and the travel version of the razor. The head is the same. The handle unscrews into two pieces and is a little bit less hefty. But one a fantastic razor.
You must log in or register to reply here.
Share:
Facebook Twitter Reddit Pinterest Tumblr WhatsApp Email Link
Top Bottom