AutoStrop/Valet Razors: A Typology in 13 Parts

The various types of Valet/AutoStrop razors confuse people, and with good reason. There are 10 basic types of razors in this family, leaving aside minor variations in handles, country of production, finishes, and kits. It’s a lot, and the variations can be subtle.

These razors were produced for only about 40 years, from 1906 to 1946. But they were revolutionary in this regard: They gave us Henry Gaisman, inventor of the Probak razor, whose patents forced Gillette into a merger with AutoStrop in 1930, a merger which left Gaisman in effective control of Gillette. Ultimately the Gillette model (“no stropping”) of disposable blade won out, but AutoStrop was a big player. And these are cool little razors, mechanically complex, in 10 basic types.

I’m going to try in the 12 posts to follow to sort that all out with a basic typology, describing with photos the 10 basic types of Valet/AutoStrop razors to help folks identify which is which.

I’m not going more than 10 deep. So I’m not going to describe the differences between a Canadian VC2 and an American one. Or a VC4 from England in a gold wash vs. an American VC4 in nickel. And I’m not photographing mint condition sets and cases. Just the basics here.

The descriptions, dates and typology nomenclature come mostly from Robert K. Waits, A Safety Razor Compendium (2014). The model numbers are his, not those of the Valet/AutoStrop. But people have come to recognize his model numbers as helpful, so I’ll use them.

And I’ll use the term, Valet/AutoStrop, to refer to these razors. They were just “AutoStrop” for the first 4 models until 1921. After that the company called them “Valet AutoStrop” razors, presumably for the marketing cachet. Technically, the older razors aren’t “Valets”, but rather AutoStrops. That’s a fine point that reflects nothing other than updated branding in 1921.

If you are a razor geek, sit back and relax.

One post about the 10 types, 10 more posts describing each type, then a final post about blades (since that too confuses folks).

So here is a group photo of the 10 basic types of Valet/AutoStrops: They are, top row to bottom row, reading left to right: 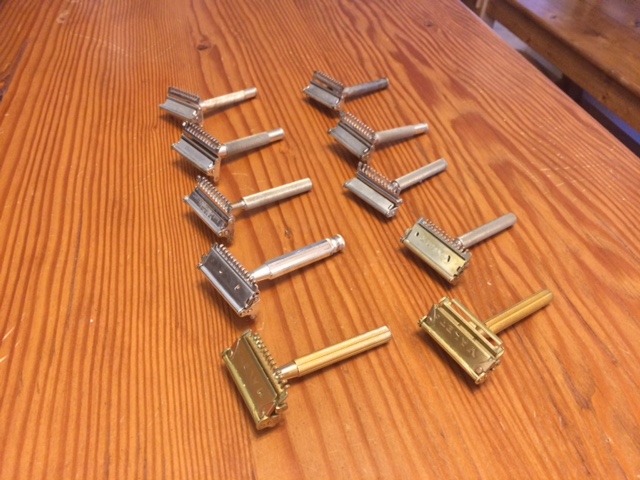 These are in chronological order of production, and you’ll notice the VB2 is out of sequence. There’s a reason for that, explained below.

This model is characterized by its fixed (non-removable) cylindrical handle and the push-button mechanism at the back of the head to release and secure the blade. This push-button is spring loaded, so you push it to insert the blade, then release it and the blade is secured. Pretty clever. But this was already a more complicated razor than Gillette was producing, the blades were to be stropped by inserting a strop in the razor itself, and the razor didn’t disassemble like the Gillette did. Most early Gillette competitors with those deficiencies just folded. Somehow AutoStrop hung on. 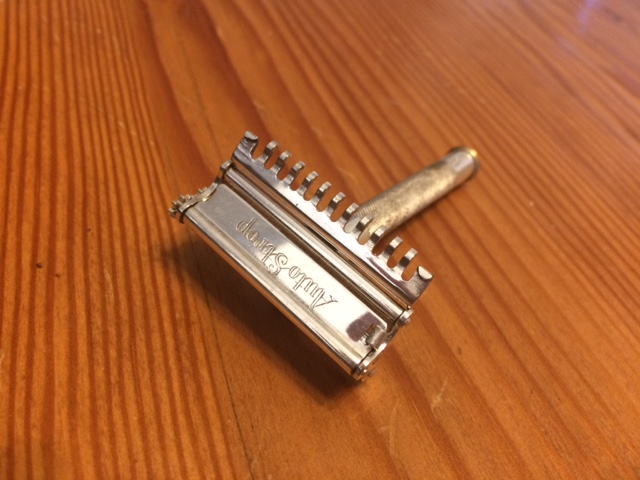 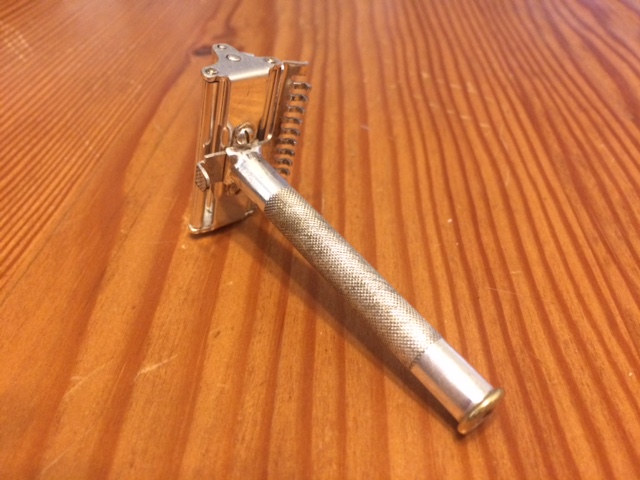 Basically the same as the A1, but the fixed handle has a square lug at the top, apparently to improve the robustness of the design. 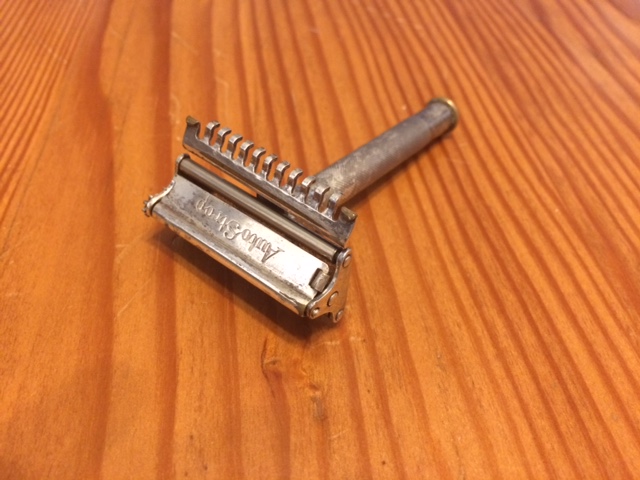 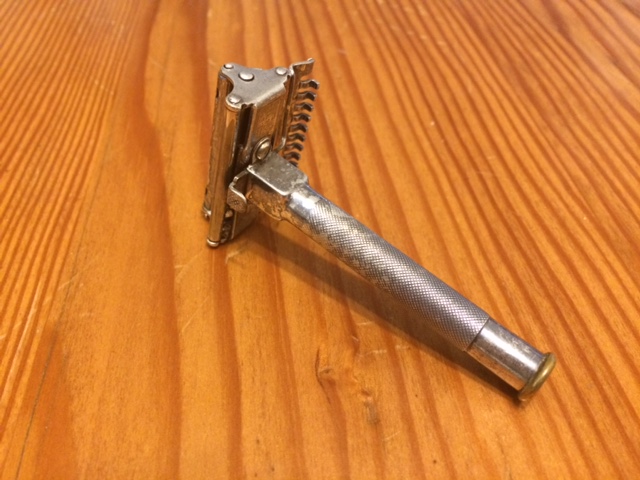 Two major advances for this razor. First, the “push-button” blade release in the Model A, which was spring loaded, was replaced in the Model B by a simpler lever that did the same job. Second, the handle became removeable like the Gillette and Gem razors, and packaging became easier. 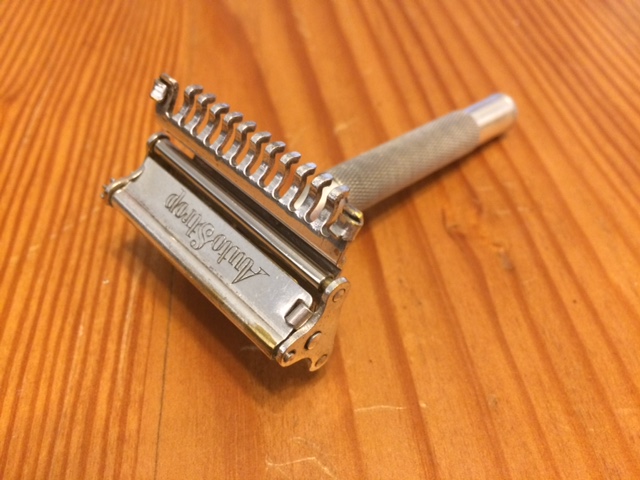 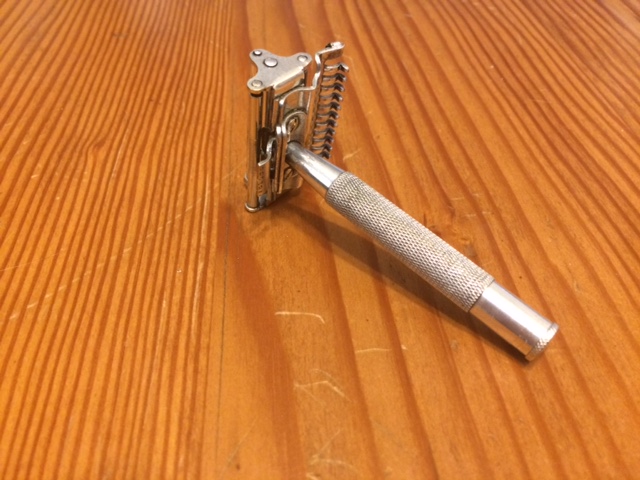 The only update here was cosmetic. The inscription on the blade door “AutoStrop” became "AutoStrop Razor." 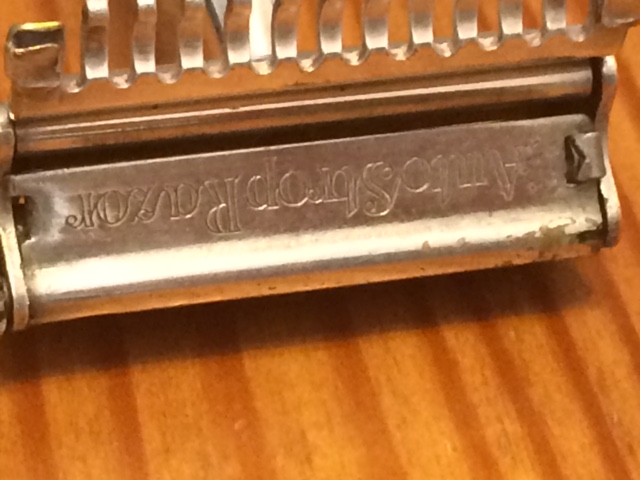 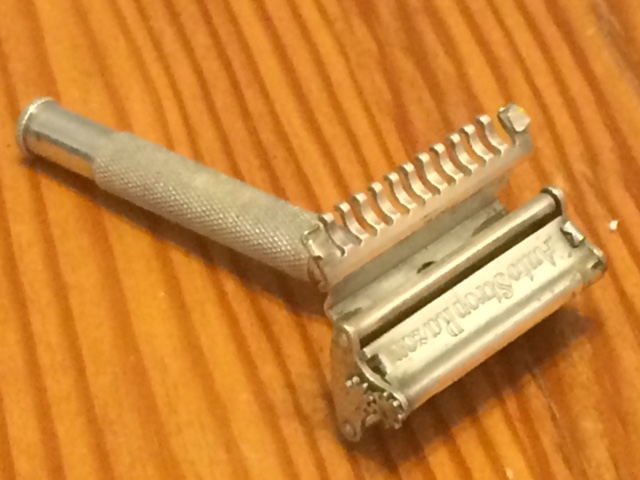 This was the first model called a “Valet” razor. That’s all that distinguishes it from the Model B1: It said, “Valet/AutoStrop Razor”. But now the Valet had a new name, a new image, and this model was the basic Valet/AutoStrop model for a number of years, as the company tried to keep up with Gillette and come up with new products. It’s not clear when this basic model stopped being produced, but likely in the late 1920’s. It was their “old design” but remained worthy of production. 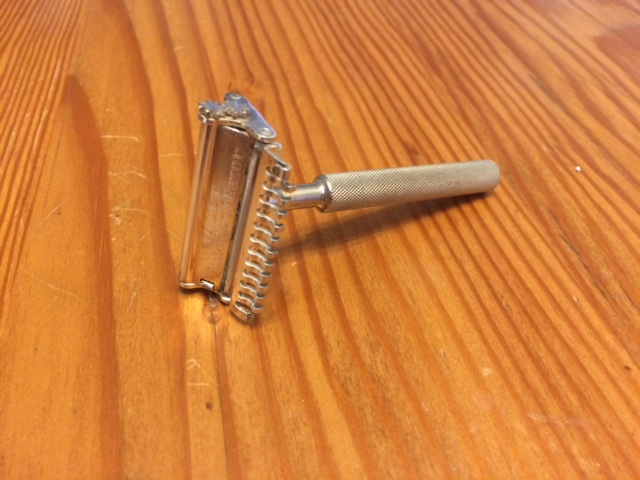 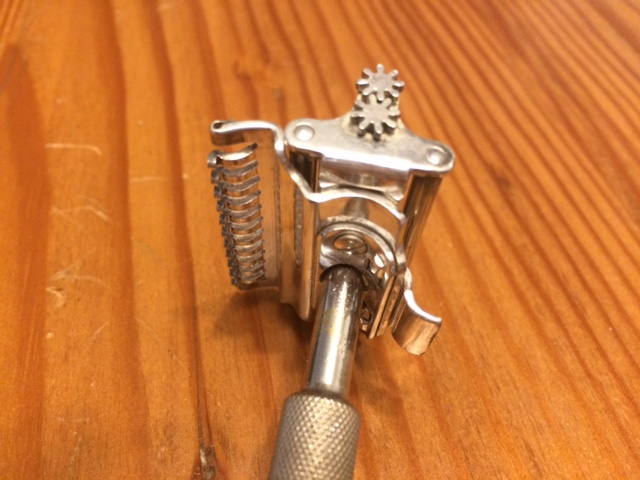 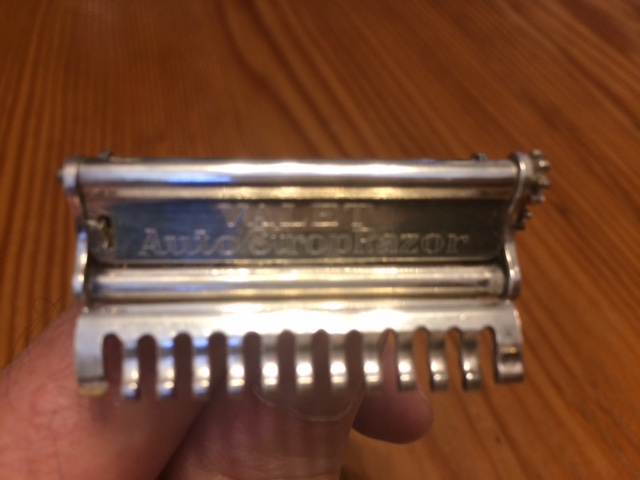 The biggest change here was at the back of the razor: Whereas previous designs incorporated a roller to guide the strop, now they are using a solid bar. (See the second photo below). Production of this model lingered for years but also overlapped with others, so it’s hard to say exactly when it was retired. 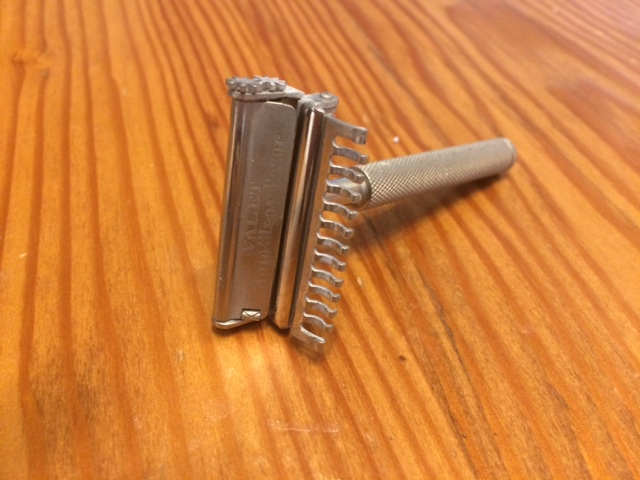 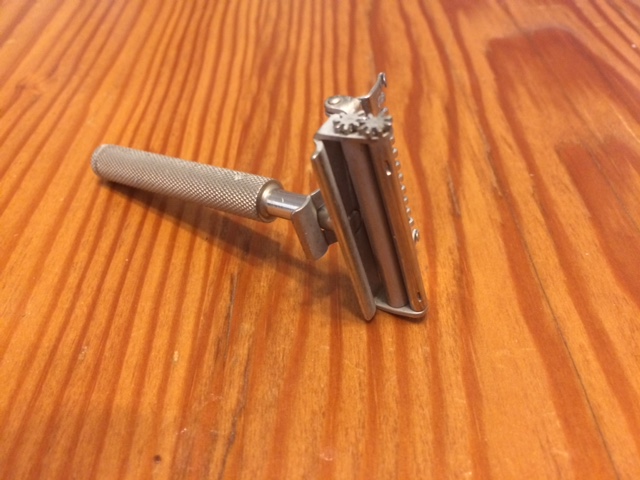 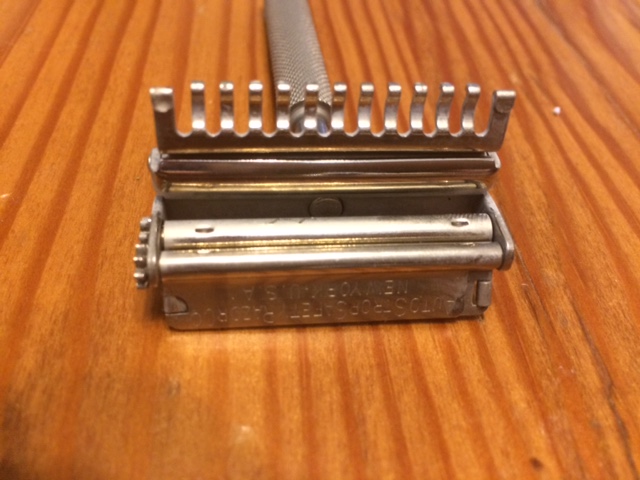 This razor is a real outlier, and it’s both special and interesting. It’s called the “VB2”, because it incorporates the roller guide at the back for the strop (like the VB1 and unlike the VC1). So it’s more like a B than a C, but radically updated and spiffed up. What Valet did here was put all its expensive design elements into a premium razor. Roller bar guide on the back, nicer handles, nicer boxes, nicer kits, nicer finishes. But what really set the VB2 apart was the hinged blade door. Instead of sliding a blade into a friction slot, then activating a catch to hold the blade, the VB2 has a door you opened, put the blade onto the “VALET” pins, close the door, then activate the latch. More complex. And the latch at the back of the VB2 was theoretically adjustable: You could change the blade exposure by moving the latch up or down. But from here on out, we have to deal with those blade pins and the fitment of blades with appropriate cut outs. These VB2’s are the nicest of all North American Valet/AutoStrops by far. The care-free attitude of the 1920’s invented them. The Great Depression killed them.

Notice the special metal work, the silver (not nickel) plating, and the more elaborate handle. This came in a fancy case. 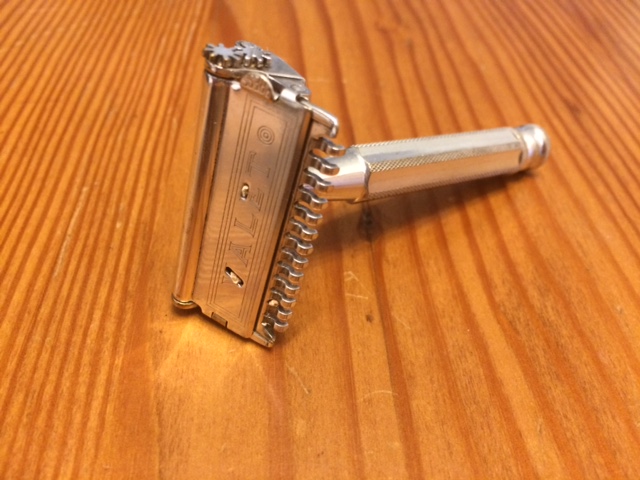 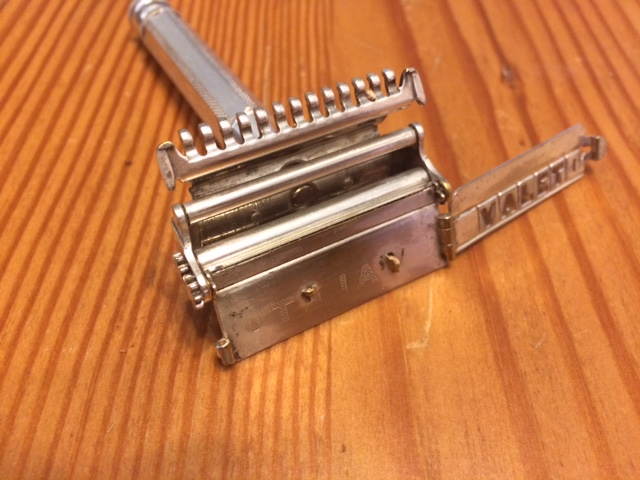 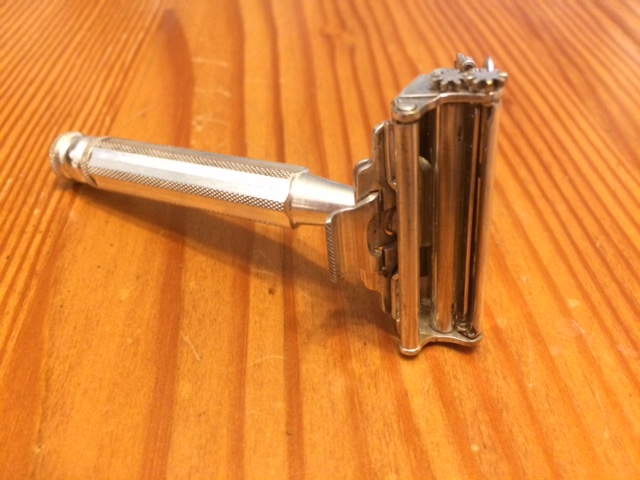 [NOTE: In 1930, Gillette was forced by patent and financial problems to merge with AutoStrop, and although AutoStrop became a subsidiary of Gillette, the reality was that Henry Gaisman of AutoStrop took over control of the joint company].
Last edited: Jun 28, 2017 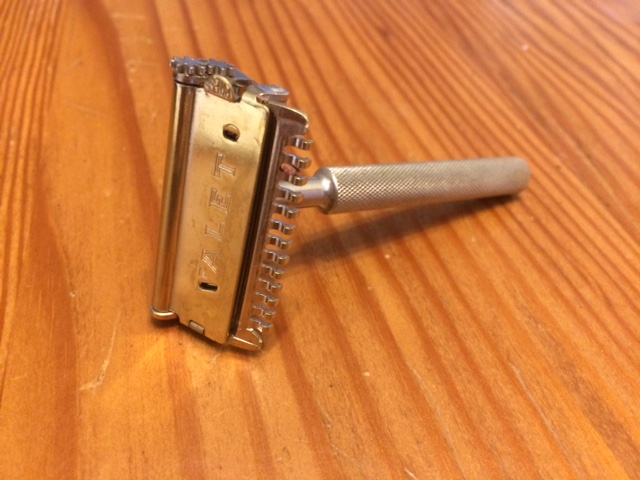 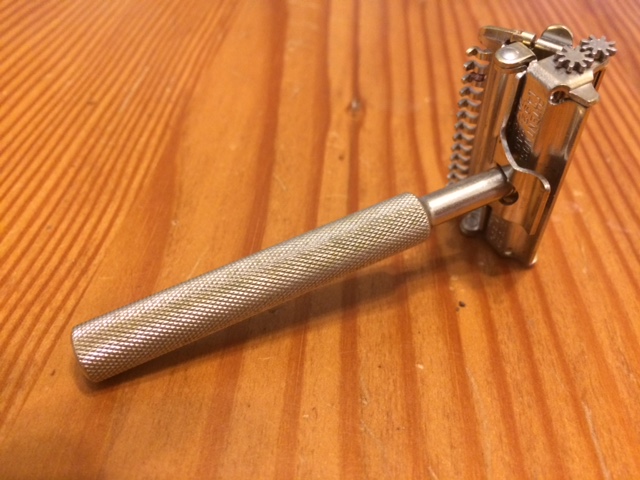 And just for kicks, here is the game changer: The Probak Razor from Autostrop. In the late 20's, Henry Gaisman patented his blade shape to fit this razor, putting the Gillette NEW in serious legal peril. Gaisman's blade patent was nearly identical to that submitted by Gillette a bit later. How could that happen? Industrial espionage? coincidence? Anyway, Gillette tried to fight Gaisman off, but they eventually had to settle, Gillette had been playing funny with the books, and Gaisman took over Gillette. New blade retention system here. Instead of the friction plate of the models through VC1, and instead of the swinging door of the VB2 and VC2, we get something new. From here on, the blade will be retained by the VALET pins and small teardrop shaped clasps at either side of the blade door. But we’re still open comb, and we’re not going back to a roller at the back for the strop. Solid bar back there from here on out. Just like the VC3, except the open comb has been replaced by the solid bar in front. Notice the blade retention system is the same: those little teardrop shaped clasps. Final note about blades: The best modern blades for all these razors are Feather blades, Model FHS-10 (stainless) or FAS-10 (carbon). Vintage Valet blades work great of course, but they seem awfully rough to me. With the older models (VC1 and before), when Valet wasn’t using the proprietary pins/blade cutouts, I’m told you can use a despined Gem blade, but I’ve never tried it. To the best of my knowledge modern Feather FHS-10 or FAS-10 blades will work in any model of AutoStrop or Valet AutoStrop razor.

Hope this has helped a bit.

I didn't get to read it all yet, but thanks for taking the time to put it all together!

Can't wait to read this tonight after work. Charles, between this and your MOAB PIF you might break the interweb!! Thank you for this informative thread. I've got a Valet AutoStrop at the bottom of a cigar box somewhere I'm gonna have to find (and try to use) now.

Notice how on the Probak the base plate is like the Star, and the cap looks like that of the Goodwill. These guys were ripping off each other's designs and racing to the patent office. Rumor, never proven, was that Gaisman had a spy at Gillette who fed him the plans for the NEW razor and blade, which Gaisman used to take over Gillette by beating Gillette to the patent office.

Bookmarked & subscribed to for further reference. Just at the moment I tried to find out more about the various models I'd seen in the wild. Perfect! Thank you very much!

Too Fugly For Free.

Thanks. A great resource.

The trick with autostrops is to stick with it if it works well for you and don't deviate too much. You can really get yourself in trouble with them if you razor hop a lot

What a wonderful and informative post, excellent job!
You must log in or register to reply here.

What Is A Good SE Razor Brand To Start SE Shaving?
2

I tried the smoothest blade on the market (Derby) and it was a bloodbath. Now what?
4 5 6

1947 - a year of 3 strange and magnificent rhodium Gillettes