Moderator Emeritus
I’m getting older. I know it and I’m ok with it. But I have a problem letting go of the things.

While at work one day a (younger) colleague of mine told me how much he liked my navy blue pinstriped suit. I asked him how old he was and he indicated that he was 33 years of age. I looked at the tag sewn in my inner breast pocket and looked at the year the suit was made. I told him that he was 15-years old when I bought that suit.

I recondition and refurbish most of my shoes and some of them are closing in on 20 years of age and still look pretty good.

I now have a closet full of ties. I still like most them. I have given away most of the ones I didn’t care for.

Some of them were purchased many years ago and their width is indicative of their age.

Instead of replacing them, I have decided to have them narrowed to 3.25” and cleaned.

I have seen Tiecrafters mentioned on B&B as well as other places and have decided to send them two ties (as an experiment).

For a total cost of $83 (including shipping) hopefully these two ties can be updated and rejuvenated instead of just hanging in my closet. I certainly couldn’t replace these two ties for that same amount of money.

If they are done to my satisfaction, Tiecrafters will see a steady stream of ties from my closet. If not, then my questions are answers.

I plan on sending them out next week. I’ll post some before and after pics.

Ambassador
Bob, your dedication to your beloved items is truly admirable. Very well done, my friend. And please, keep us updated.

Subscribed. Very interested to see before and after picks.

Moderator Emeritus
The striped ties are being used for comparative purposes. The patterned ties are headed to Tiecrafters for narrowing and cleaning.

As a side note, these are all Brooks Brothers ties. I do believe the quality of the older ties is head and shoulders above the newer ties. 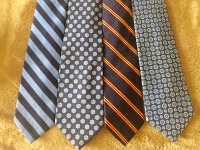 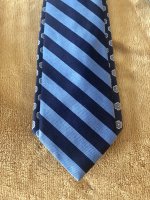 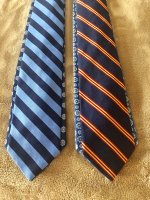 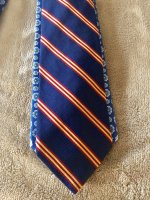 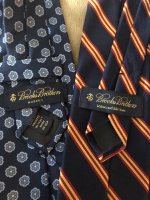 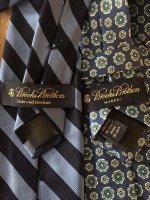 Moderator
Robert you are my hero!

Jim said:
Robert you are my hero!
Click to expand...

Which means I have to work even harder, James.

Ambassador
@johnniegold , excuse me: on the patterned right tie (last photo) I see "printed in Italy - made in USA". Does this mean that the design of the tie is Italian and that it was manufactured in USA?

Moderator
Hey, you stole some of my ties!

johnniegold said:
As a side note, these are all Brooks Brothers ties. I do believe the quality of the older ties is head and shoulders above the newer ties.
Click to expand...

Side note to the side note, I believe this is applicable to Brooks Brothers in general.


Marco said:
"printed in Italy - made in USA". Does this mean that the design of the tie is Italian and that it was manufactured in USA?
Click to expand...

The way I read this, the cloth had the design printed onto it in Italy, and was shipped to the USA as a bolt of cloth ... where it was cut and sewn into a tie.

Moderator
Beautiful ties, what else is there to say. You will be able to enjoy them for many more years to come.

Moderator Emeritus
I received an email from Tiecrafters today with a copy of my paid receipt indicating that the work would be completed within 2 to 3 weeks.

Moderator
Casual friday until then eh?

johnniegold said:
work would be completed within 2 to 3 weeks.

What are you going to do in 2y when the styles go back to wide ties?

Good looking ties by the way. It pays to buy quality.

brucered said:
What are you going to do in 2y when the styles go back to wide ties?

Good looking ties by the way. It pays to buy quality.
Click to expand...

Now... you know that answer.

Moderator
Yeah, send them back for widening. Can’t wait to see the finished product.

I appreciate your dedication to taking care of your stuff. And those ties are magnificent, by the way. Classic and timeless; that's the way to do it. I happen to like Brooks Brothers' ties myself. Do you think you really need to have them narrowed? Personally, I'd prefer a tie that is proportioned to my torso and lapels than conform to whatever's currently trendy.
You must log in or register to reply here.
Share:
Facebook Twitter Reddit Pinterest Tumblr WhatsApp Email Link
Top