The Vector is Blacklands best razor.

DaveHStone said:
@Blackland Razors Shane, just a question - any chance you guys will offer Blackland products via one the major EU-based retailers?

Asking, as getting one from US is a huge PITA

Yes. We’re adding a lot of international retailers this year. We just added a French retailer and three UK retailers. So we currently have six European retailers and will be increasing that over the coming months. The issue right now is supply. We had a lot of growth last year and that effectively wiped us out. Scaling production now and getting everything stocked over the coming weeks will allow us to wholesale more.

Blackland Razors said:
Yes. We’re adding a lot of international retailers this year. We just added a French retailer and three UK retailers. So we currently have six European retailers and will be increasing that over the coming months. The issue right now is supply. We had a lot of growth last year and that effectively wiped us out. Scaling production now and getting everything stocked over the coming weeks will allow us to wholesale more.
Click to expand...

Sounds great and congrats on growing your business!

Could you possibly share the name of the French retailer? Or if it's not appropriate, just PM it to me.

DaveHStone said:
Sounds great and congrats on growing your business!

Could you possibly share the name of the French retailer? Or if it's not appropriate, just PM it to me.
Click to expand...

It's good to see that Blackland is doing well. I'm eager for them to get restocked.

Sadly I do not have a Vector yet

. But it's on my wish list. Moreso now that it's coming out in TI

. However I have a Colonial Razor's The General and an ATT SE1 that I've been shaving exclusively with for a while now. My experinece has been so good I've pretty much sold all my "high end" DEs. The General is a step above the ATT in terms of efficiency and comfort. And based on the feedback the Vector is even better!. So can't wait to get my hands on one..........

It's definitely going to be light, but I don't think it will be too absurd. It should be around 42g which is in the ballpark of aluminum DEs. The head should be <10g which is wild. It could be too light for some, but that's not a problem because you can just buy the stainless version instead.

Last week, for the first time ever, a customer returned a Vector for being too heavy. So the Vector Ti should have at least one fan.

Blackland Razors said:
Last week, for the first time ever, a customer returned a Vector for being too heavy. So the Vector Ti should have at least one fan.
Click to expand...

Wow! That is Wild a customer returned the Vector for being too heavy. I can’t wait to purchase a Vector Ti!

The Vector is a fantastic razor. The design is very unique and it just works. The slim head, stiff AC blade and perfect balance make for a great shave. Probably the only razor that I’m able to get a true BBS shave with. Blades are expensive but it’s a great shave. A TI version would be interesting for sure. 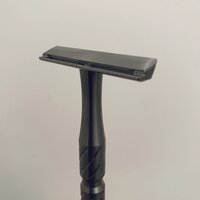 Contributor
Thanks to everyone here, I could resist temptation no longer. I ordered a Vector SB today. And excited at the chance to use such a design!

I've owned an SS Vector for a while and cannot imagine it being heavy. If I were a serial Ti shaver then it may feel heavy. The SS Vector shaves superbly. Those looking for an SE razor that shaves practically on auto pilot, the Vector may be for you. I also like the Vector's maneuverability, it is slim! With Kai Captain Titan Mild blades it is smooth, efficient. I personally imho cannot imagine using a more aggressive blade with the Vector, but those with coarser beards - go for it.

NoScrubs said:
During the prior 30-40 days, I have been enjoying my Lather Catcher Journey rotation (no DE's or other SE's in the rotation). Last Thursday was my last shave since I did not have a face to face meeting scheduled until the following Wed. I decided to give my face a 3 day shave rest which ended up a 5-day rest. Tonight I decided to bring out my Vector since it had been a while since I last took it for a spin and I thought that it would be a good test for my Vector OC. With a significant 5 day growth, I loaded up a Proline 30 blade with the Vector OC. I have several Vector posts on B&B praising the Vector and tonight is more of the same. I am convinced that the Vector is the top dog at Blackland. I have owned the Bird, the Sabre, and the Dart, and they are all great razors but the shave tonight sealed the deal. My first pass with the OC base set me up for an easy second pass with the SB base. Five days of growth and I only needed 2 passes and a good clean-up and I am close shaved enough to skip a shave day. The Vector has always been a superior razor for my jawline and neck. If you venture out to acquire a Vector get both plates. The OC base provides slightly more blade feel but it mows down whiskers and sets you up for fewer passes. The SB base is silky smooth and comfy. If you shave every day or have a light beard then the SB base is all you need. By the way, the Vector is a great head shaver too. Like others here on B&B I move many razors in and out of the den and can own up to 30 vintage razors and a couple of modern razors in any given month. As good as the Vector is it will not motivate me to curtail my hobby for now but if I could only have one razor the Vector might be the one.
Click to expand...

shave/brush said:
No pictures? No pictures it didn't happen! 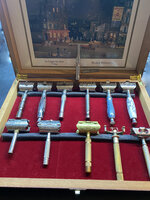 Contributor
The Vector arrived today! What a svelt AC razor! I thought the Occams Enoch was a slim design - and it is - but the Vector is another notch slimmer. Here's a few pics.

L>R: Vector, Enoch, Asylum RX
Each of these avoids positioning the handle threaded rod behind the blade, making for a thinner profile than say the ATT SE1. But the Vector beats them all by placing the threaded rod thru the blade. It should smoothly glide around my nose/upper lip like a dancing Michael Jackson. First shave tomorrow...

What's the difference between Schick Proline P-20 and P-30?

Just for the records... Blackbird is the best razor of Blackland IMHO...and of the world...

The more I use it, the more I like it!

@Blackland Razors Shane, this is a true design masterpiece - aesthetically beautiful and functionally dominant to any other DE/SE razor I tried so far. It just works.

BTW, I'm really happy I opted for the machined finish. To me, this satin-like, matte finish is far better looking then the glossy polished one. It has that "understated" beauty to it, pure class. 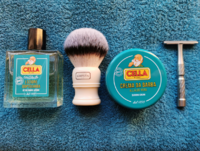 LOL, I'm pretty sure I've posted this setup in a SOTD post sometime in 2020, but I lurv it so much. I bought the polished Vector a little over a year ago, and bought this polished Ti handle for it shortly thereafter. The stock polished handle sits in a drawer, unused, but it still so pretty to look at, hahahaha.

The Vector has made me forget about DE razors for some time now......but, I do plan to buy a Ti DE razor soon'ish. 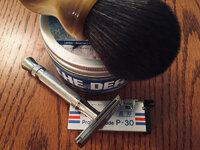