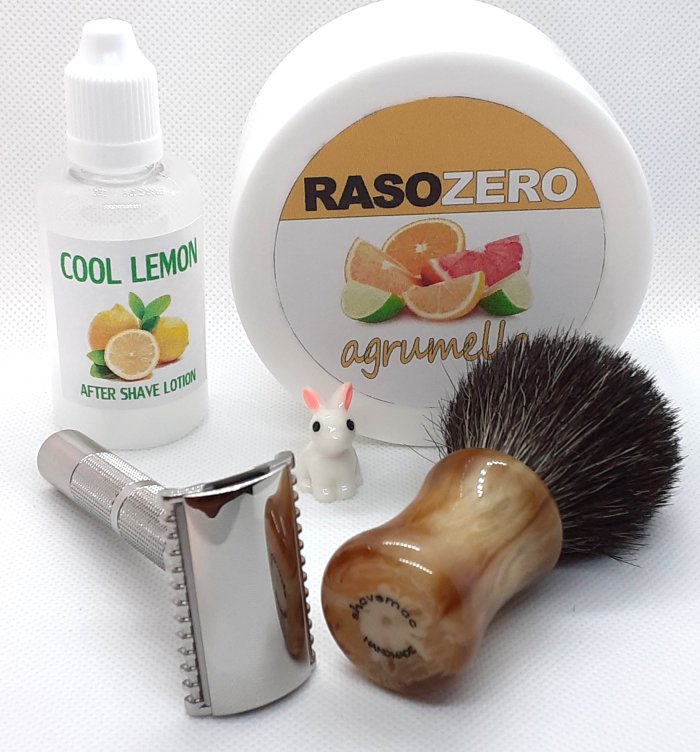 I'll endeavor to make a list of the things I like about this razor, and any I don't like (which I haven't discovered so far) for a future post. Currently I'm just enjoying the shaves with no thought whatsoever as to anything technical.

My second shave with the dime safety razor. Modified gem bluestar blade, king r emporium soap and aftershave. Still learning the razor some very minor blood spots that quickly went away. I did shave against the grain. Bbs no irritation. The razor is extremely light and has chatter and vibration as it shaves. You hold the blade pretty flat to face. 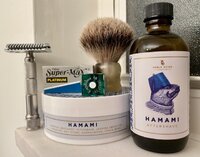 A nice CCS tonight, essentially no feedback from the alum. The Omega did its usual stellar job--I really think this is a brush everyone should try. And it's cheap! I really wish Omega would use the same mix and knot size (it's a great knot) in a larger handle. I'd buy it in a heartbeat.

Have a great week everyone!

Last one before the week ends, before bed. It’s still Sunday here.

I have the TSS Rein Dachs Klassik with this handle, and decided to pick up the synth and boar in the same handle. They arrived yesterday and I tried out the synth "mimic badger" first. It's better at mimicking badger than I expected. It's the first synth I've ever used that had any prickle to it. Not unpleasant at all, but it was definitely there more than any other synth I've ever used. It also has a nice bit of resistance that doesn't feel springy. Not bad at all. TSS thinks it's the same fiber as the Mühle synth, which is part of the reason I bought it. I don't have a Mühle and wanted to try it out without paying their prices. So I don't actually know if it's really the same fiber, but I liked it better than many of my other synthetics.

Washington Cutlery was a local concern back in the day; I picked this up at a nearby antique shop on a lark for cheap (obviously, given the condition.) Sent it off to Gemstar Customs for honing and it returned on Friday.

And boy is it honed. Took down hair in a single pass better than any DE I've ever used. Problem is that it wasn't a good day to use an unforgiving blade. I am not sure what was going on with my face today, but this thing drew blood three times. Never, ever had that happen before. Rinsed off the soap after the third time to apply styptic and found my face had an odd, draggy feel to it. The Erasmic is not new to me so there's no reason to suspect it. I have no idea. Very weird.

Lathered up again, completed a once-over on my face with the straight, not cutting myself any more. One quick ATG under my chin with my Slim, because I didn't feel like bringing the straight there again, rinsed, AS, and done. No sting. Was a fine shave other than digging into my flesh.

Stropped and dried the razor and put it away. I think it's going to take some time off in favor of my other straights before it gets used again.
Last edited: Nov 1, 2020 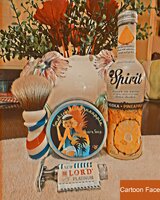 Shave 6 with the Schick blade and it is still performing well, broke out the Nag Champa from Stirling, I forgot how much I love this soap. Great shave with no issues. 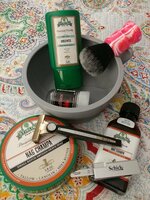