ronweston said:
Distinctive composition, Doug. Another SOC shows up in a SOTD! I really need to get one.
Click to expand...

Thanks, Ron. I go back and forth on my SOC. I find it to be a bit difficult to use sometimes. It's a bit of a lather hog, IMO. Sometimes I love it, sometimes I don't. It sure does make a pretty picture though. 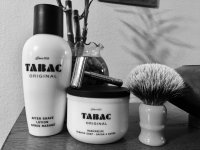 I've been gone too long, but back in the game today.

Inspired by Ron and his list of SE's, I purchased the RazoRock SE Black Hawk, and this is my first shave with it. This is my second SE. The asylum will be purchased soon.
Decided to go all Italian with as much RazoRock stuff as possible:

I really like the Razor. It did a very fine job at giving a close shave.
The "guard" part is new for me and I did find that it took extra strokes to make each pass clean as soap was left behind on many strokes.
I may try a SE without a guard to see how that works.
I was surprised at the very light weight of the razor.

Looking forward to move shaves with this SE. 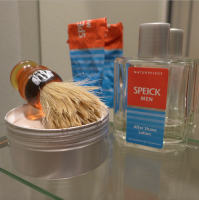