Could not resist using this nice background photo of Los Angeles Opera Co.'s
"Barber of Seville", in L.A. Times, March, 2015!

Wow, this razor is a welcome change from my usual Tech usage.
I'm now practicing better technique with it. Blade today cut really well, still plenty sharp.
The Proraso lotion is the best I've used so far as I've been relying on cheaper store bought
AS products which I still will always use. 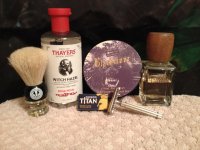 I didn't realised the GEM Micromatic Bullet Tip behave very much like an R41, because I still didn't have very much stubble on my face after nearly two days of growth......WOW

I still wanted to shave so bad today, I didn't want to wait until tomorrow otherwise I'll get bored waiting to remove my bloody stubble off my face on the third day.
Last edited: Jan 2, 2018

I find your lack of an apostrophe disturbing...There. Now that that's off my chest...

Charlatans Traipse is an exclusive to The Club members who are also in the Facebook group. It uses a vegan soap base that's competitive with other upper tier bases, its most notable trait probably being its ease of lather and density. However, it's no slouch in the slickness and post-shave categories. If I understand correctly, this is the same base that's used in the vendor's A&E line of soaps (not the creams).

Off the puck, Charlatans Traipse smells of rather bright herbs and new leather with a gentle touch of pipe tobacco. This a mere glimpse of the true nature of this soap when lathered. At which point, when the moist knot begins to swirl, the herbaceous notes come alive and are sweetened by the pipe tobacco along with some spiciness and a familiar note akin to vanilla and cherry. During the paint phase of the lather application, a new leather note takes hold of the accord and all but nullifies the initial sweetness ushering in a glorious but subtle descent. A brief transition phase of warm and arid dry straw serves the theme of this accord well. Subsequent passes unveil a darker oily leather that has aged and developed a constrained smokiness without losing its elegance. Tobacco and leather establish a dominant role towards the end of the shave.

The splash opens a bit differently with a brief burnt caramel note reminiscent of Barrister and Mann's Roam, but the similarities really end there. As that initial sweetness abates, herbs, tobacco, and smoky leather unfold in a similar fashion as the soap. As is the case with many paired sets, the accord is expanded in the splash with subtleties and complexities that simply aren't feasible in a soap base. This is usually the part of my writing in which I nag the artisan for an EdP, but honestly this splash has impressive endurance, and I am still enjoying this elegant fragrance almost 5 hours out, now.

Wonderful early morning shave, continuing with some of my little-used soaps and aftershaves, was very impressed with how well the clubman musk complimented the classic shave soap. The Feather blade/Variant combo delivered a smooth drama free shave.

First shave of the year and it was a delight! I loaded a fresh Feather in my late Grandfather's Knack. Cold water shave with MERS Barbershop and a Zenith badger. 3 pass BBS finished off with Lemon Thayers and Skin Bracer. Let it all dry and put some AV Sensitive 5 in 1. 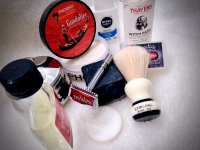 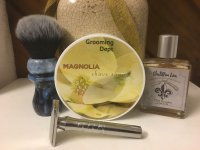 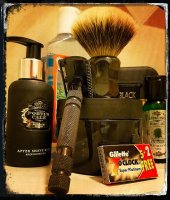 EzraCobb said:
How u like Sudsy Soaps? I love there unique vegan formula, I have the twice mint, lav mint, and limited Pink peppermint.. Granted I am a Mint Junky, but NOBODY does mint better than SS scent wise for a soap. Performance is amazing as well slick as all hell and top notch post shave... i Also HIGHLY recommend there balms! Hope u had a great holiday season Steve, sorry for your ill brother in law --- life is so unfair... wishing the best for the smooth clan in 2018!! Take care, Jamie
Click to expand...

At the Maggard's meeting last spring I bought their Delor De Treget Shave Soap & Sandalwood & Citrus Creamy Aftershave Balm. They also gave out samples of their Lavender & Peppermint Bathing Soap with Oatmeal. All the products have been great, but honestly the big standout for me is the Balm. I really like it and frequently people comment on how nice my skin looks when I use it - seriously. In fact today, one of the guys at work saw me walking down the hall and said that it looked like I just got back from somewhere nice an warm over the holidays. Their products do shine with the post shave. Thanks for the well wishes and we will keep praying for Rick and his health. Things do not look good, but we are with him in the fight. Peace brother and enjoy the new year, Steve
G

Have a nice day Gentlemen 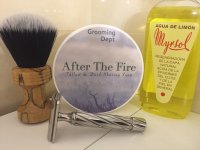