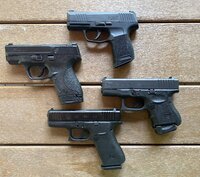 Seems there has been a boatload of chatter regarding the pros and cons of the many different micro-9mm offerings available lately. So.....coming up soon is going to be a fairly objective real world comparison of the four firearms often discussed. All are box-stock. No modifications at all except one entry has an aftermarket magazine (Mag-Pul 12 round).
Evaluations will include carry comfort, conceal-ability, overall feel, ease of shooting, general vibe.
All will be my opinion...save the flames.
Each shooting session will consist of one magazine, containing cheap, crummy Russian ammunition. Holsters will be Andrews Leather Saddle Holsters or Ritchie CQ-QR.

Moderator Emeritus
This will be fun to follow, Tim. I've often thought about a Shield or a Glock in comparison to my P365.

Claudel Xerxes said:
This will be fun to follow, Tim. I've often thought about a Shield or a Glock in comparison to my P365.
Click to expand...

You are one sick puppy, Rob. You've been brainwashed.

Contributor
This is awesome.

Tim's gonna make us go nuts waiting on his reviews...

Well worth the wait in my opinion.

Claudel Xerxes said:
Well worth the wait in my opinion.
Click to expand...

It is. But I have still have that Heinz Ketchup commercial running thru my head.

OkieStubble said:
It is. But I have still have that Heinz Ketchup commercial running thru my head.

Contributor
Ambassador
And now.....
I decided to do this evaluation in segments as there will be a considerable amount of stuff covered.
Static issues like sights, trigger, ease of maintenance, price, etc. will be covered in a couple different episodes; conceal ability, carry comfort, reliability, and similar concerns in yet others.
Of course...the important part-just how well do the things shoot will be saved until the final installment.
So let’s begin.

Things to consider....
Everything is MY opinion.
The focus here is to evaluate these pistols as EDC weapons to be used as self-defense firearms, not recreational, not competition, not service weapons.

PACKAGING-Yes, a nice secure case is a far better thing to have than a cheesy cardboard box. All the guns here come in sturdy, lockable, hard cases...except the Shield which shows up in the aforementioned cheesy cardboard box. You may not think that is all so
important until the first time you need to transport your pistol, either by air carrier, or across state lines where such things are strictly regulated and requires a hard, lockable case.
Advantage...tie all around, except for S&W.

PRICE-Personal priority plays a huge part here. All of the sidearms involved are very, very well made and quite dependable. “You get what you pay for” doesn’t ring as loud of a bell here as elsewhere.
Shopping around is a good idea.
Prices are going to vary but for the most part:
S&W is going to be the runaway lowest priced entry; I have seen the 9mm Shield (new) priced as low as $275.
Glocks and SIGs come in around $500. Many Glock models can be purchased at a considerable discount through their “Blue Label” program. Check with your local dealer or the Glock website for additional information.
Advantage...S&W; Face it, $200 is a good chunk of money and can be easily considered a tie breaker.

TRIGGER-Yes, they all have a trigger. All the triggers do what they are supposed to. Pull them, the gun fires. As earlier stated, the focus here is defensive weapon.
A smooth pull, clean crisp break, and all that other good stuff is most desirable for firearms designed for IPSC, bullseye, or other similar competition shooting. Even casual target shooters will appreciate such a trigger feel. But...
When a life endangering threat is 15 feet away and closing in fast, I feel safe saying you will have no idea what that trigger pull is going to feel like. You just want it to work. Plus the ever present tales of woe about the concerns of a modified trigger showing up as evidence in a courtroom are maybe something to consider. These ain’t really sporting arms.
Advantage...tie all around.
Tough typing on an iPad so that’s all for right now.
More to follow...stay tuned.

Contributor
In for the duration on this one.

Contributor
Ambassador
PART II
Back to what we were doing.

SIGHTS-As mentioned before, these are not set up to be target pistols per se. Their design is that of a self-defense weapon. Defensive shooting is not draw, focus, line up sights, breathe, and squeeze. But you all knew that. A real world defensive use of any of the pistols here will be close range and should incorporate what I know as "Flash sight reference". That technique is best described as use of the front sight only; bringing the sight blade to center mass of the target and then firing. Rear sights don't really fit into the picture here (no pun intended). With that in mind.
Both Glocks have big, in-your-face white dot front sights and a bold white outline rear. Excellent for both the aforementioned quick sight aiming method and more accurate shooting as well. Old school and very functional.
SIG offers up a nice set of night sights which do offer something of an advantage in reduced light environments. They are nice, bright, and line up well. Indeed they could be somewhat bigger and are not prone to come on target as easily as the Glocks.
The S&W three dot sights are pretty garden variety but do a decent job. Not as quick as the big Glock sights, but they line up nicely, offer a more than adequate sight picture and do a good job.
Advantage...Glock 26/43X.

MAINTENANCE-Gonna have to split some hairs here.
All of these pistols are totally simple to field strip and clean. A toothbrush, bore snake, and can of Break Free (or Ballistol, or Hoppe's, or...) is all you really need. Disassembly is simple and straightforward, mostly.
I think every Glock ever made comes apart the same way. Not much to it. The P 365 is also very easy but reassembly requires some fiddling with the slide catch to get it on there. Shields require pressing down a "sear deactivation" lever down in the magazine well. This needs a small screwdriver or similar tool to do properly. A simple thing, but just another step to follow. As I said, we're splitting hairs here, but...
Advantage...Glock 26/43X (but barely)

RELIABILITY-Many rounds have been fired through these weapons. All sorts of ammunition has been used. Bottom line, the S&W and Glocks have NEVER had a malfunction, not one.
The SIG had a minor issue when brand new. Round would extract, eject, and feed but on more than a few occasions the slide did not want to return to battery; it kind of stuck back about 3/4 of the way back down. This problem was solved with mucho lubrications, another 100 or so rounds and a solid scrubbing on the rails and ramp surfaces. Problem begone.
One thing here which shall rely on input gleaned from outside sources, the legendary Glock durability. They just keep on ticking. That is a global truth. And with that in mind coupled with my own experiences...
Advantage...Glock 26/43X

We will return soon.