We all know the Fatip Piccolo and Grande. The smooth but aggressive razor that so many here love. You don't see so much about the Schone, it isn't as popular or well known. That is a shame.

First, the Schone is basically a Fatip Grande with some minor modifications. Fatip makes the Schone in the Fatip factory. The Schone has 9 slightly wider teeth v. the Fatip's 11 narrower ones. Otherwise, the heads are the same.

I am interested in hearing from others who own both. I'll give my observations as well, but that seems a bit unfair. I've only been DE shaving for a bit over 2 1/2 months, I've shaved eight times with my Schone with some of my favorite blades (Polsilver SI, Astra SP, Nacet, Shark SS), and I've only shaved twice with my Piccolo with a blade I suspect I'll like but that I've only used three times total (two of them in the Fatip), the Astra SS.

The Schone is a terrific razor. It was the perfect razor for me as a newbie who was ready to step up to something more aggressive. It is aggressive (you can feel the blade on your face, and the visible blade exposure almost stopped me from using it the first time), and it's quite efficient, but it is also amazingly smooth. Blade alignment is perfect and takes no effort. It didn't take long for me to shave as comfortably with it as with my more mild razors such as my Merkur 38c or EJ. It may be my favorite razor.

So, I was very much looking forward to trying out the Piccolo. I find fit and quality control to be a little lower than the Schone. There is a bit of a difference between the alignment of the blade on one side v. the other (this is the newer version with the marking on the underside of the razor). While my shave is just as close, it is no where near as comfortable. It will take some practice to achieve the same comfortable shave as with the Schone and the Piccolo isn't nearly as smooth.

To control for variables such as weight and length (the Schone has a longer and hollow handle, it is the same handle as the Grande), I may try the Schone head on the Piccolo's handle and the Piccolo's head on the Schone's handle (to mimic a Grande) to see if any of the difference is the handle and not the head. With that change, I should be able to see how the Schone would match up with the Fatip Grande, the nearly identical razor with some changes in the head that seem that they may make a world of difference.

Anyway, so far, I love my Schone. The jury is still out on the Piccolo.

I love my Piccolo. Satisfying to take a weeks growth off without rinsing the razor.

I have both razors and I find the Schone shaves just as close but gives a lot smoother shave. It's now one of my favorite razors.

Thanks a lot you two. My out of control RAD doesn't need further motivation. And with that I'm going to get the Schone that I've been considering for quite a while.

matwho said:
I have both razors and I find the Schone shaves just as close but gives a lot smoother shave. It's now one of my favorite razors.
Click to expand...

my story as well, the Schone is one heluva good deal...

MntnMan62 said:
Thanks a lot you two. My out of control RAD doesn't need further motivation. And with that I'm going to get the Schone that I've been considering for quite a while.
Click to expand...

I got a bad Schone. Alignment problems. When I was able to get it evenly aligned, it was no where near as aggressive as my Piccolo. I bought it for the handle anyways but can't recommend it as a razor.
J

MntnMan62 said:
Thanks a lot you two. My out of control RAD doesn't need further motivation. And with that I'm going to get the Schone that I've been considering for quite a while.
Click to expand...

KeenDogg said:
I was thinking the same thing...ENABLERS!!!! THE LOT OF YOU!!!!
Click to expand...

I'm not much of a photographer (and my phone isn't much of a camera) but let me try to help you out:

malocchio said:
my story as well, the Schone is one heluva good deal...
Click to expand...

And where do you get it? eBay?

Here's my Schone. Just got it earlier this week. Smoothest shave ever, my skin felt like latex after I was done mowing through a couple of days worth of growth.

Mougrim said:
And where do you get it? eBay?

Sent from my Redmi Note 3 using Tapatalk
Click to expand...

I got mine off of Amazon. I haven't checked to see if it is available on Ebay.

Mougrim said:
And where do you get it? eBay?

Sent from my Redmi Note 3 using Tapatalk
Click to expand...

I got the gold version here: Alrossa.com

malocchio said:
I got the gold version here: Alrossa.com
Click to expand...

Oh, thank you! And they have free shipping to USA addresses from 30 bucks...

Do they accept PayPal before I order the Schone gold version ??

I ended up getting both. 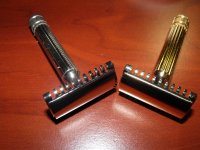 Just had my Schone out this morning with a Treet Classic carbon steel blade (third shave on that blade). This is a really, really efficient razor that brings out the best in any blade you put in it. It clamps the blade well out toward the cutting edge and as @rabidus and others have noted in other threads, this greatly reduces blade chatter, an even more important consideration with today's thin (.004" or so) blades versus the thicker .006" thick blades of yore.

This razor tackles the toughest of stubble easily and enables a super close shave with fewer passes. I find it far easier to tame an efficient razor than to struggle with a milder razor trying to get the results I'm looking for, which inevitably either induces irritation or leaves you with what feels like a sub-par shave.

For a solid, all-brass, nickel plated razor circa $25US shipped, the value is unbeatable and it will last you a life time.

SpeedyPC said:
Do they accept PayPal before I order the Schone gold version ??

Very interesting comparison, thank you all. At first they seem to be almost the same but apparently there are quite a few differences from what you report.
You must log in or register to reply here.

Have I sinned against us Fatip Grande users?
2