I had to get one due to the general reviews and low enough price to take a punt.

How the hell anyone can be proud to put something onto the market with such a poor finish (considering there are many others in the same price band and far better finished e,g. Parker) is beyond me. The fatip looks more like something a factory worker would pick out and throw in the recycle bin along the production line.

The handle is smooth enough in the hands but the eye can see areas all around it where it looks like the smoothing/finishing process is one area where improvement is needed.

The head, teeth and cap look reasonably OK to the eye as far as a finish goes but the prongs that secure the blade are a bloody joke! They are not attached to the cap with a good quality join which further adds to the problem of securing the blade in place. The only upside to this amount of blade movement is that, there is plenty of play to get the blade aligned which is likely to take a few attempts. The only way I can do it is to hold the blade itself at the ends with my fingers also covering the cap and baseplate, fiddle with these 3 as I tighten the handle with the other hand. 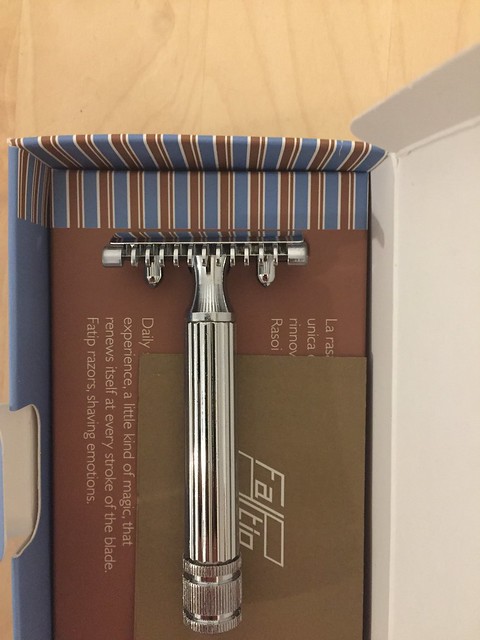 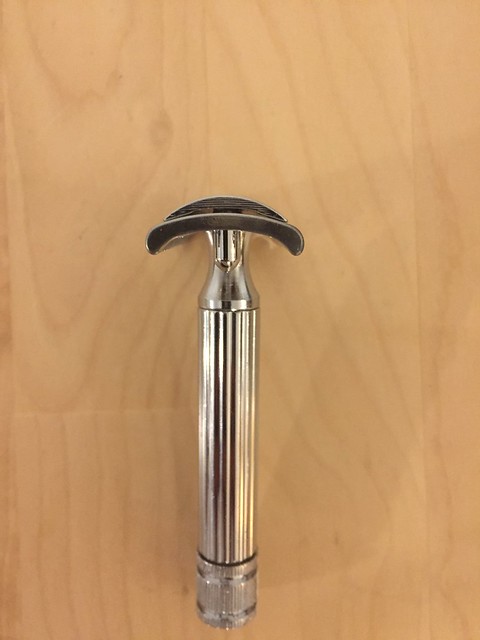 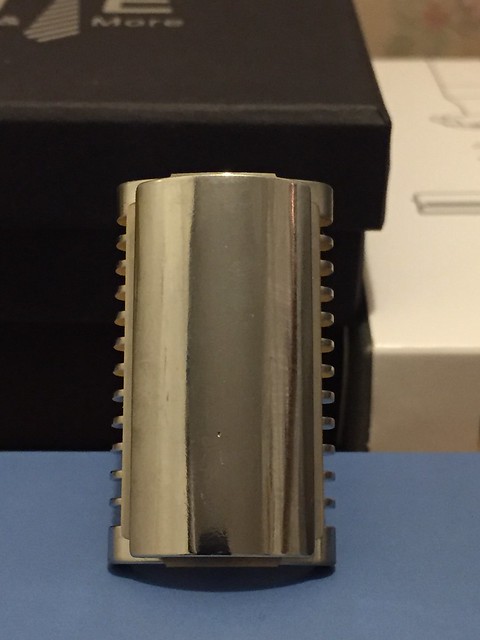 The fatip grande is a small little unit, much smaller than I ever imagined and I believe it weighs 66g. It feels light in the hand all round with the balance point at the top of your grip just below the head. I tried to attach the fatip head onto a hefty parker handle but, it was not compatible, so had to use the fatip as it came in the box.

As I prefer hefty units, I did notice during the shave I was ensuring that I was actively keeping the razor at the correct angle.

Size comparison against other units is below; 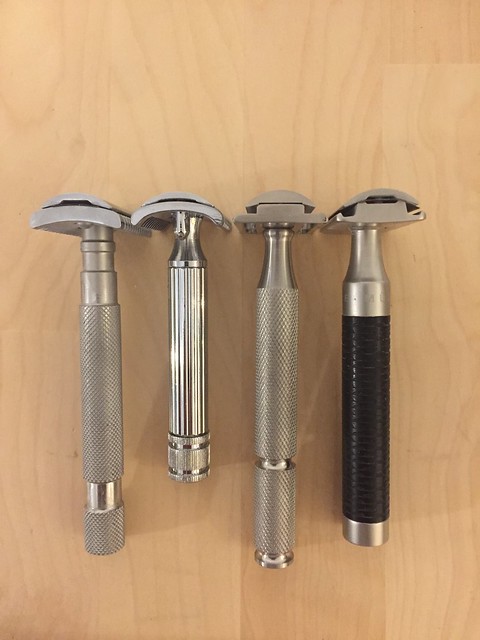 (For all testing and comparison reviews, I always use a new Astra SP blade and the same shaving cream, ensuring the only difference is the razor itself).

It took a couple of strokes to get the angle just so but, oddly it felt too smooth from the general aggressive reputation it has. It felt almost like it was doing nothing, despite me stretching the skin and applying a gentle pressure to shove it into the skin as well. Only with gentle pressure into the skin, could I get it to shave like any reasonable open comb should. As far as aggression goes, the Parker 68S feels more aggressive. I would class aggression as mild-moderate overall as it was fairly smooth in my hands.

For efficiency, it was pretty impressive despite my previous comment. The first pass was mowing down whiskers impressively nearly on par with the Muhle R41. The finish after the first pass was somewhere between the Parker 68S and Muhle R41 and therefore, highly efficient.

For me, an ‘efficient’ razor (regardless of aggression) should get me BBS and eliminate the shadow line on Asian skin with coarse hair on the second pass (XTG above the chin line and ATG under the chin) and only very few I have come across can achieve this. On the second pass, I was impressed further. The Fatip was giving a seriously good finish for something that feels quite smooth with almost no blade feel. The finished shave just beats the Parker 68S open comb (so better than an ATT R1 for example but, below that of the Muhle R96 and R41). The finish is BBS which has left me somewhat baffled at how the Fatip’s managed it (even around the chin) but the Muhle R96 and R41 seem to get the hairs out a bit deeper (albeit with a few extra strokes in the same direction).

There was one significant difference with the Fatip, the fact that it did what it could during each stroke and pass which resulted in absolutely no clean up needed eliminating that extra stroke here and there or, a bit of re-lather etc. This actually saved some noticeable time. It was clear that extra strokes with the Fatip did nothing provided the correct technique was used in the first place consistently from start to finish.

Despite me not liking the handle and thinking it could be prone to slip, I deliberately dunked the entire razor and my fingers in the bowl but, the fatip’s grande handle didn’t slip in wet fingers.

Questionable build quality which will lead to inconsistency between units and shaves but, it offers a highly efficient shave in a mild-moderate manner. The lack of clean up/touch up strokes passes is a bonus. Whilst it is affordable in the world of razors, it should be better finished for its price.

Thanks for your assessment! It is indeed a fine shaver. It does seem like with Fatip's quality it is hit or miss. Thankfully my Grande is nearly flawless, especially the head & baseplate & perfect alignment everytime.

Blade loading: place top cap on a towel. Set blade on cap. Next add bottom plate. Then attach handle-- all while razor remains upside down. Give it a visual check before shaving.

This technique should improve the alignment issue.

BTW, my Schone, made by Fatip, has a very nice finish.

Polsilver, Gillette yellow, and Gillette Platinum all seem to work well for me.

Macfrommichigan - thanks very much for sharing that blade loading tip. I will definitely try that at the next blade change.
D

Thanks for the detailed review, @DSK! When I opened up this thread and saw the pictures and organization, it made me smile.

dundak said:
It’s the shave that counts and not many can surpass the Fatip without extra effort required

The only complain I have against Fatip is that they don't sell aftermarket handles.

The rest is so easy forgiven . I have a grande and a piccolo plus a gentile plate. Best offer for its price.
D

I absolutely see and appreciate where you are coming from. For £23 I'm not overly fussed at the general finish of the unit as its pictured and it doesn't impact the shave. However, there are as many Fatip owners who report no issues and just as many who do. There are also cheaper razors with a better finish top to bottom.

However, I do take blade alignment seriously regardless of the cost of a razor. It is not rocket science to get it right. I could do better than Fatip in my shed let alone with a factory and proper tools. Muhle, Merkur etc make razors that cost just a couple of pounds more yet do not suffer blade alignment issues on this scale. Additionally if I was a manufacturer, I would appreciate that slightly incorrect blade alignment can result in avoidable irritation and nicks. I would not expect all users to know how to align a blade, perhaps some may cut themselves in the process to trying to align one via fiddling etc. and all this will get a manufacturer is a negative review.

dundak said:
It’s the shave that counts and not many can surpass the Fatip without extra effort required

+1.
Love to shave with my Fatip Grande.

Contributor
Ambassador
I recently had a similar experience, posted about it, and got lots of responses claiming how amazingly awesome this razor is. Poor fit and finish, wiggly blade alignment, and an uncomfortable but close shave. I think the Grande in my experience is too much of a hassle when there are so many amazing razors on the market right now. That’s my opinion based on my experience. I’m entitled to not like a razor and put it away. Maybe I will give my Grande another chance at some point. Maybe not. Right now I’m having too much fun with Timeless, Karve, and the new RR stainless razors like the Mamba and Game Changers to mess around with my Fatip.

I've been pleased with my Grande, however, it hasn't been getting any use for many months since I dived into the vintage rabbit hole!
D

So it turns out, the wife knew I was splitting hairs about getting a Fatip. She didn't know I ordered one along with my ATT upgrade and got me the Fatip Special Edition for xmas.

Being open minded, I decided to see if its any better than the grande but, haven't used it.

The finish is no better on the special edition (and what Fatip calls a 'jewel') from what I can see between the two. The blade on the grande moves around like a fishing boat in the ocean but, sits a bit more snugly on the special edition, especially around the central thread post. There is approximately 50% less blade movement on the special edition compared to the grande. Whilst this looks promising, the blade still takes a lot of faffing around with and eye balling to get the alignment bang on which for me (and no doubt many others), is annoying. On this one the twist on the blade is easily managed but, it moves back/forth so easily that the blade will be sat closer to one end of the guard to the other. Shame to see a poor build let down an otherwise good performing razor. 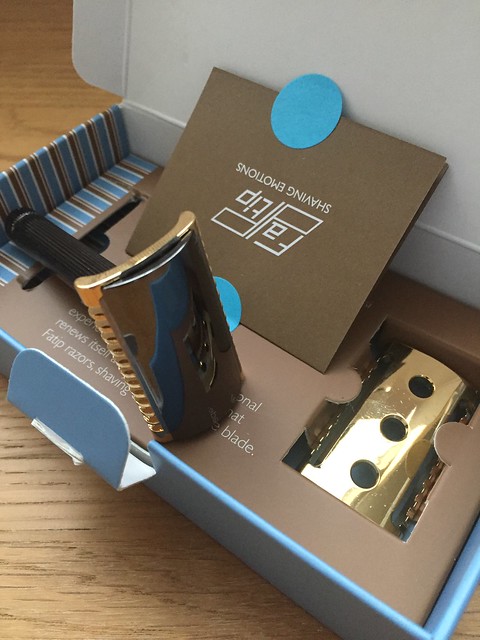 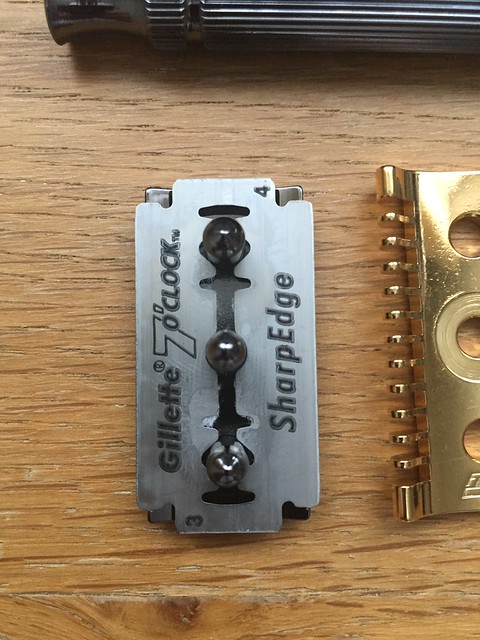 Every Fatip I own is a winner, and I own quite a few. I vastly prefer open combs because I'm not a daily shaver kinda guy.
M

I honestly don't think this is due to it being a Special Edition, but just random manufacturing variation. I have three Fatip caps, and all three are so different in terms of blade alignment (despite being theoretically identical) that it's hard to believe they came out of the same factory.
D

Marlor said:
I honestly don't think this is due to it being a Special Edition, but just random manufacturing variation. I have three Fatip caps, and all three are so different in terms of blade alignment (despite being theoretically identical) that it's hard to believe they came out of the same factory.
Click to expand...

I agree. I only mentonied that as it was the second one i got and just to illustate that the quality varies between units with some being better than others despite the units supposing to be the same.

Buying a Fatip is a bit like playing Russian roulette....sometimes you get lucky/with the [email protected] but play/buy enough and eventually you’ll probably run out of luck!.

albsat said:
The only complain I have against Fatip is that they don't sell aftermarket handles.
Click to expand...

But there's nothing to stop you using a different M5 threaded top cap and then using the handle of your choice. Here's my current favourite razor - the Grande bottom plate with a Yintal Bronze top cap and a Russian titanium handle courtesy of rusdrunkbear on eBay. This is quite a beast and shaves very close! les24preludes said:
But there's nothing to stop you using a different M5 threaded top cap and then using the handle of your choice. Here's my current favourite razor - the Grande bottom plate with a Yintal Bronze top cap and a Russian titanium handle courtesy of rusdrunkbear on eBay. This is quite a beast and shaves very close!

You are making me buy a Yintal!. Guilty!
You must log in or register to reply here.

Is this a problem (new Fatip Piccolo head)?