A couple of months ago, I noticed that the OneBlade ads on some of the sites I visited started showing pics of a razor that had a Core handle and a Genesis head. When I inquired about that to OneBlade, they told me that it was the soon to be released OneBlade Hybrid with the head of a Genesis and handle of a Core. Price point was going to be in between both. The razor was released and I held off getting one until I read some reviews and until Black Friday came around because I know that OneBlade heavily discounts their complete line at that time. While searching for reviews, I came across a write up by Mantic59 of the entire OB razor line (which included the Hybrid). I was surprised to find out that apparently there were further revisions to the Core, which looked interesting.

My first experience with OneBlade was when the Core was released about a year and a half ago. I got the original version, and complaints started coming in about how it wasn’t a very efficient shaver (which I agreed it wasn’t). Version 2 came out just a couple of weeks later and folks traded in the original Core for v2 and many were happy with it (or at least to the point of not returning it in masses). Many, like me, returned v2 and eventually got the Genesis and were happy campers since.

The latest version of the Core (v3?) apparently used a different, more durable plastic for the head and changed the head geometry to be closer to that of the Genesis so that the shave would be more Genesis like. Suddenly I became more interested in the latest version of the Core instead of the Hybrid. I guess I saw the Hybrid as being a half step down from a Genesis and the Core as truly being a low cost Genesis. Besides, after the discounts, I paid a price closer to what the original Core went for.

When the Core arrived, I immediately noticed that the head was of a different color and was not shiny smooth like the original Core head or the handle. Balance was slightly better than I remembered, but it still look a little more effort to actuate the pivoting head. I immediately loaded the Feather FHS blade I used for my template and it loaded easily without effort. Alas, the floating feature still existed. I next tried inserting a despined Gem blade (but not notched) which I have been experimenting with on my Genesis for a while now. It inserted well and friction seemed to hold it in place. This time the blade did NOT float, which is a good thing. 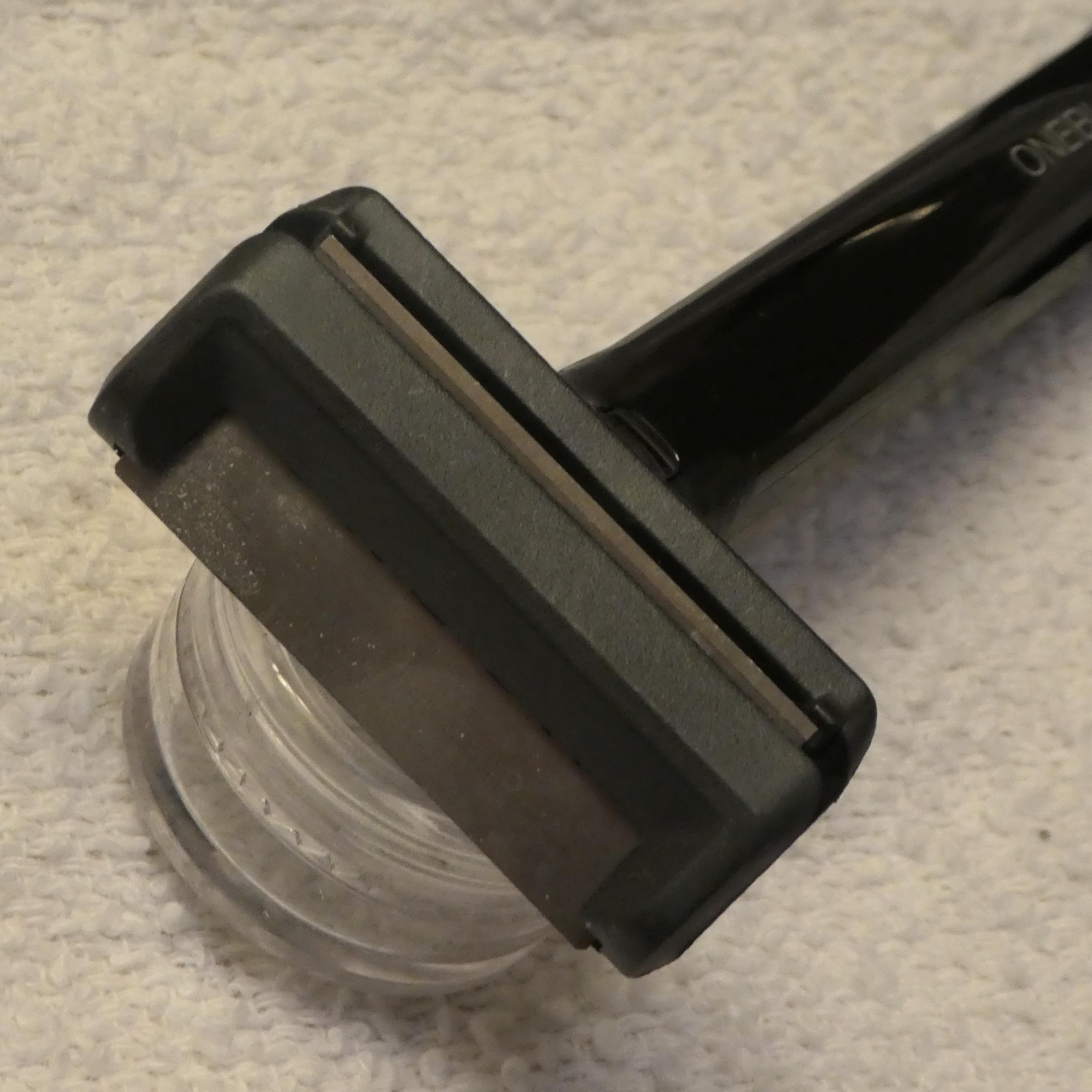 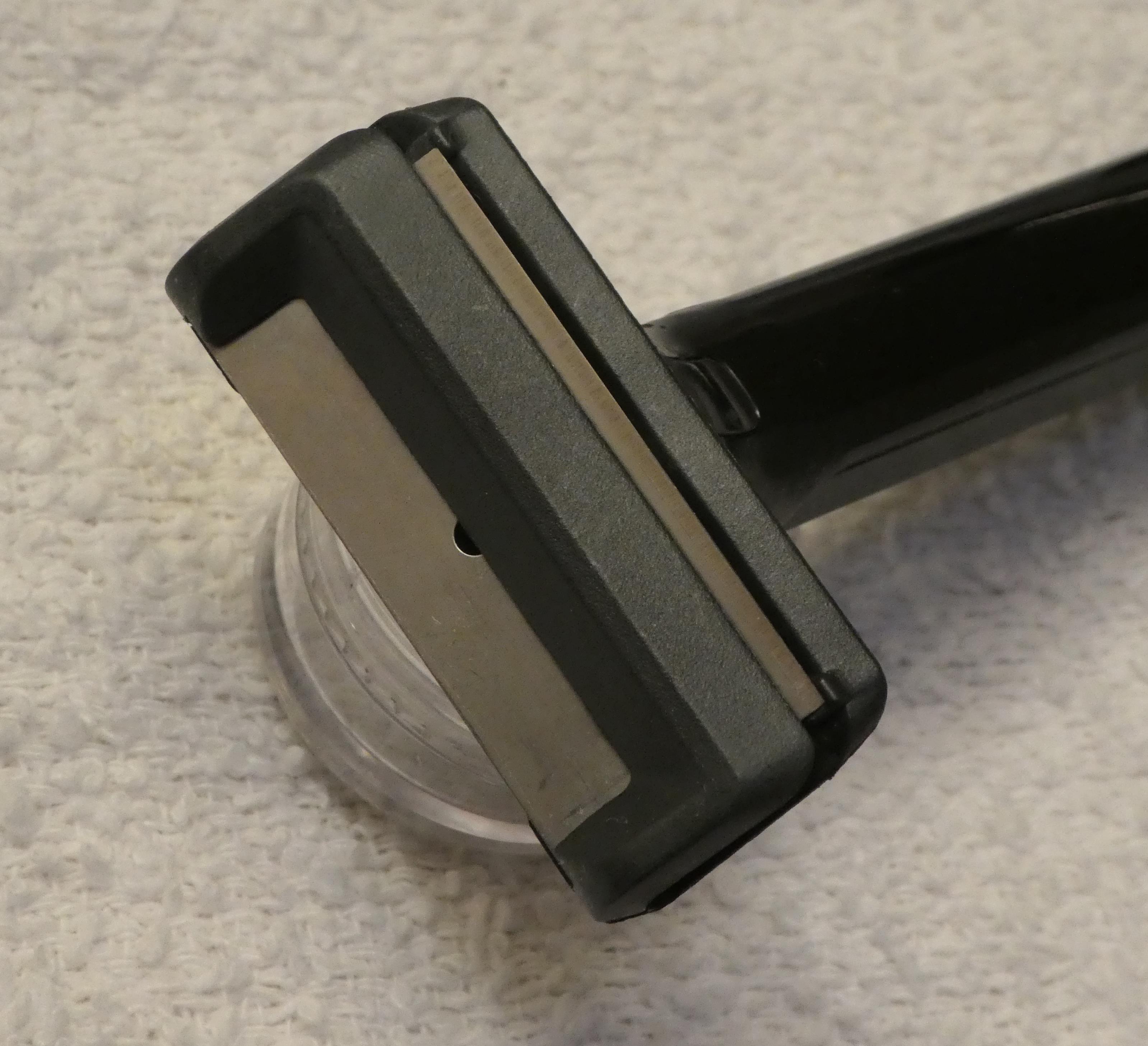 Comparing the head of the new Core and the Genesis, it appears that they are similar enough for me not to notice a difference except for the materials used. I don’t know how this compared to the original Core head. 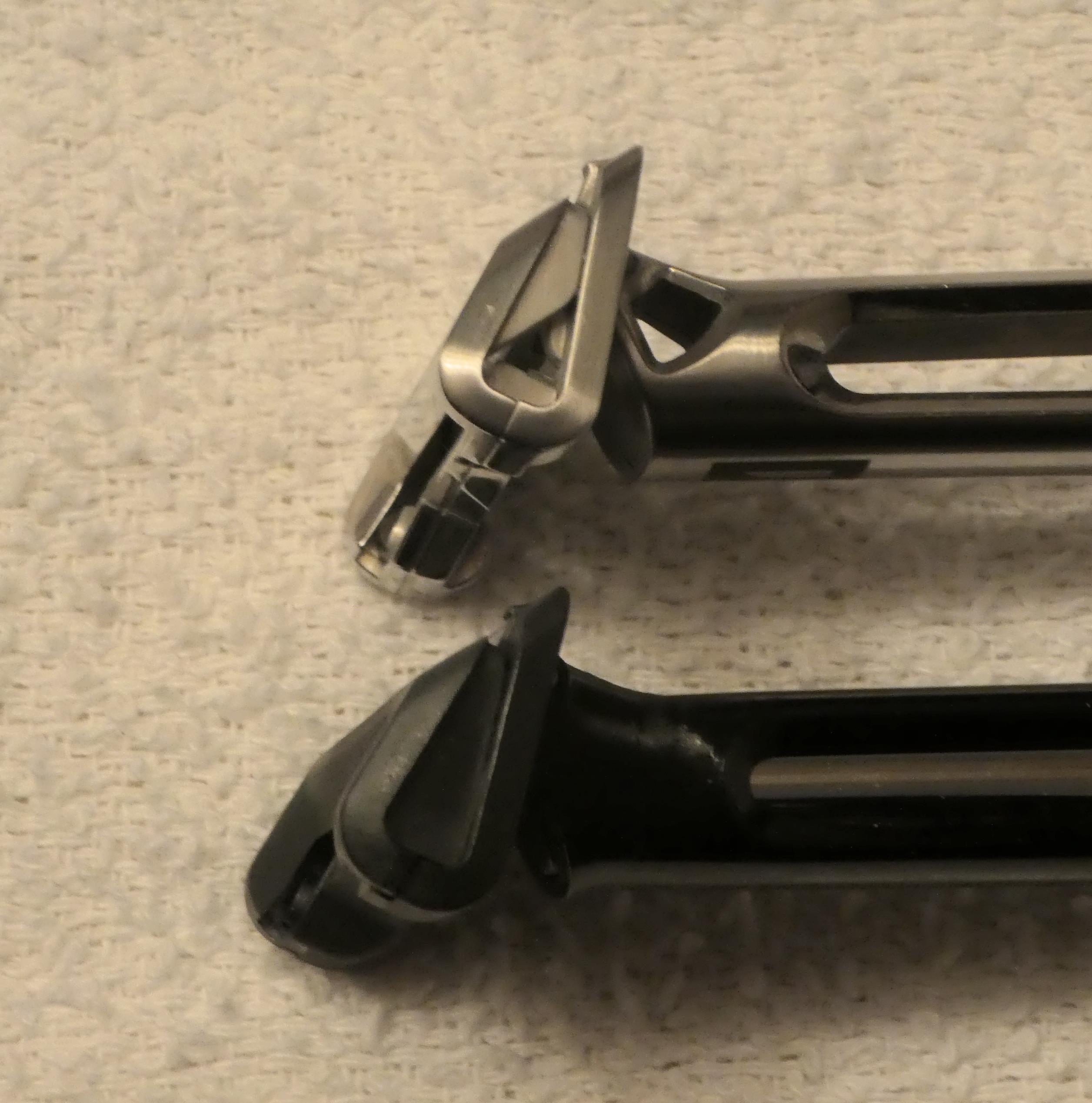 So how does it shave?

First of all, I loaded a despined (but not notched) Gem blade as I have never used a Feather blade in any OneBlade going all the way back to when I participated in the pass around a couple of years back. The blade seemed secure and so I started with a WTG pass. That pass was very comfortable and uneventful. Halfway through the pass, I noticed that there was still a lot of stubble left and so I checked the blade to make sure it was still secured, which it was, and finished the pass using more pressure (which I remembered was a characteristic of the original Core).

Next pass was ATG, and again, I applied more pressure than normal and rode the bar more as I remembered that I needed to activate the pivot to have it be effective. I found that because of the lighter weight, it did require more effort to activate the pivot. ATG pass went well, however a major touch up pass was necessary.

I did the touch up concentrating on stretching my skin and going XTG, again with more pressure than I wanted to. I ended up with a near BBS, but an extremely comfortable one. I definitely need more shaves with this new Core. The improvements seemed to help in the overall blade loading and slightly closer shave, however the shave characteristics of needing to apply more pressure stayed the same.

At this time, I haven't decided if the changes in head geometry actually had the effect of bringing the shave closer to the Genesis. It did move it a little further along to feel like a razor that required some attention to get a good shave (and a little further along than the cartridge razor experience). Next time I will shave half my face with the Core and the other half with the Genesis.

Nice read.
I was always leery of the Core due to people cutting off the blade stops. Is this a potential issue withe the new Core?

imatabor said:
Nice read.
I was always leery of the Core due to people cutting off the blade stops. Is this a potential issue withe the new Core?
Click to expand...

Personally, I didn't think it was a problem with the original Core. It was just that there were folks out there that insisted on pushing the blade in long after it seated, which is like the person that insist on tightening a bolt until the head shears off. In any case, they did improve the stops to make it less protruding and more forward like the Genesis. Supposedly this new plastic material is more durable and will prevent that from happening unless you insist on doing it.

The new Core is a huge improvement.

The head is made of a new crystalline polymer called PPS. There are many variants of PPS for different applications, and this one contains glass (I think for hardness and smoothness?) and PTFE, the same material found coating the best blades.

I personally have found it glides over the face far better than the original Tritan heads (I’ve owned v1 and v2 Cores). I also think it has a stiffness and sturdiness that the Tritan heads lacked.

The pivot tension has also been adjusted to be slightly less stiff. For me, this tension is right in the sweet spot.

I own this v3 Core and a v2 Genesis, and I do find myself reaching for the Core more often. It’s that good. Very different beast from the original Core that offended so many wetshavers years ago.
Last edited: Dec 5, 2018
You must log in or register to reply here.

Yesterday at 10:53 AM
Cornbread