Good morning, Everyone and Happy St. Patrick's Day to all!

It's time I threw together a PIF. I have much to be thankful for to the B&B forums and its members who post such valuable and fun information. So...without further delay...here goes. Whoever is interested, please first post...I'm in! Then...if you have any other comments, add them in after the aforementioned, "I'm in!" can be in the same post. Please note, I will be paying for the shipping as well. I am PIF'ing the following items in one shot. Hardware - (Everything shown and listed will come without its original box...just the item. Some items have been used, but everything is in excellent shape.)

Fatip Open Comb Slant - (I have shaved with this a number of times. It's in very good shape.)
Fatip Nobile Tuxedo - (Also used a number of times. From when it was new, this razor had the infamous Fatip blade alignment issue. You can manually align the blade and get it right. Just takes a bit more time.)
Global Shave Club Calypso open comb razor w/WCS black anodized steel handle (Never used this razor...I bought it for the fancy handle which I currently use on another razor. But I did pair it with a West Coast Shaving handle that matches the finish and coloration of the razor head.)
Parker Semi-Slant razor (Used about a dozen times)
Dovo shavette with four blade clips: 2 x clear, 1 x black and 1 x green. (This was used once or twice.)
Feather Artist Club SS Shavette Japanese style (Used about a 7 or 8 times)
4x RazoRock Stainless Steel razor handles (I'm not sure what the models are, but they are all too short for me and have simply been in storage since I received them. As with all the hardware listed here...hoping it finds a home where it will be appreciated and get some use.) 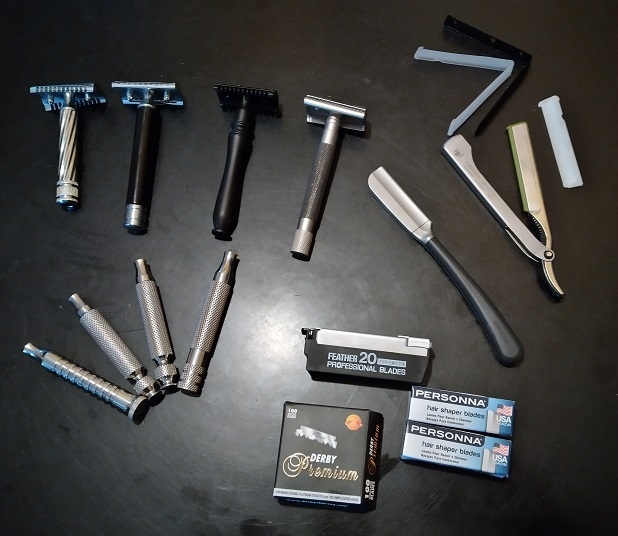 I am not limiting this to the Continental United States. I'm uncertain about the aftershave...I know that vendors cannot ship alcohol-based items overseas, but...if someone from overseas wins this PIF and I find out that I can't ship the aftershave, then you will get everything here minus the aftershave. I would ask that whoever should get this lot...that they post in this thread that they have received it.

One other note...the winner of this PIF will be selected completely and totally randomly by some method I'm not sure of yet, but will figure it out and post the method. I mean it!!! A total random selection!

I'll be leaving this up for a week...so the winner will be selected next Wednesday, March 24th and posted in this thread.

I sincerely hope that this PIF is well-received and has some things of interest for just about everyone.

Thank you all and God Bless!
B

I'm in. Holy crap you are generous person!
E

I'm in! Have you considered giving these away to multiple winners? I feel like that would be better than one winner winning the entire lot. Very generous of you regardless!!

I'm in, this is quite the PIF, extremely generous of you.

enaha1313 said:
I'm in! Have you considered giving these away to multiple winners? I feel like that would be better than one winner winning the entire lot. Very generous of you regardless!!
Click to expand...

Admittedly, I'm trying to keep things simple and ship out one box, one time. But thanks for the suggestion. Good luck!

I'm in! That's a rather lavish PIF. Thanks for the chance.

That summer storm caught my interest a while ago, but was afraid the wife would get me if I bought another soap.

Some PIF are too nice to be in. Very generous, respectfully not in.

I'm in!
Thank you very much for giving International Members the chance. Super-duper kind and generous!!
@JCarr....you really embodies the spirit of this forum!

I’m in.
Those are some great Razors.

Chard52142 said:
I'm in!
Thank you very much for giving International Members the chance. Super-duper kind and generous!!
@JCarr....you really embodies the spirit of this forum!
Click to expand...

Sent from my KB2007 using Tapatalk

Respectfully not in, but wow! Very generous PIF.
D

I’m in! This is an incredibly generous PIF kind sir! If I win I’ll gladly be splitting this into a couple more PIFs to spread the love some more

Not in, but holy heck man, that is an incredible PIF! That's enough stuff to supply a few dens for newbies and some fantastic additions for anyone else.
D

emwolf said:
Not in, but holy heck man, that is an incredible PIF! That's enough stuff to supply a few dens for newbies and some fantastic additions for anyone else.
Click to expand...

That’s exactly what I’m thinking! Great for newbies, hope one of us fresh guys gets this to help jumpstart the journey haha
Y

Wow what a community. Not in, but good on you!

Wow, incredibly generous PIF!! I’m in on this one

This is amazing, all sorts of goodies.....the shavette and feather kami style look great....that is something I always wanted.
Thanks for doing such a generous PIF
You must log in or register to reply here.

GIVEAWAY! A Starter Kit to Keep or PIF
2

S
Trouble with the canned goo