...in which Tankerjohn reviews the Pilot Custom 912

I like Pilot. Rather than simply churning out the same model or two in a couple sizes and new color variations, Pilot offers a plethora of unique fountain pens in their gold nib lineup. The Custom 912 is one such offering. Beneath the classic, conservative black exterior lays a pen with unmatched nib options and a great size and feel for daily writing. 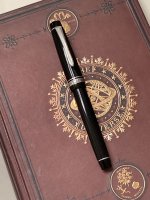 Body – This is an extremely stylish pen. Stylish in the classic and timeless sense of Cary Grant’s suits and Audrey Hepburn’s “little black dress”. Flat ends and rhodium trim always look good and seem to be generally preferred by a large part of the enthusiast community. It’s a Goldilocks size – small enough to fit in a shirt pocket, but big enough to comfortably hold. It works well posted or unposted. I like the grip section in particular, which is somewhat wider than the Platinum 3776. For a plastic, er, excuse me, resin pen, it is well built and has a premium feel. Pilot offers the 912 in any color you like, as long as it’s black. I can appreciate the Henry Ford approach and piano black is something of the “vanilla ice cream” of pen colors – everybody likes it even if it’s not their favorite. Nevertheless, Pilot is really shooting itself in the foot by not offering this pen in a variety of colors. This would be a sure fire best seller if you could get it in at least as many colors as the Falcon or CH91 and give the Sailor Pro Gear a real run for its money. But whatever. Far be it from me to lecture the biggest pen company in the world. 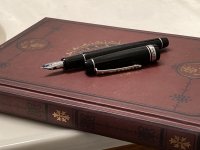 Con-70 – A distinguishing feature of the 912 is its standard converter, the Con-70. I think this might be the most controversial converter on the market. People seem to either love it for its high capacity and push-button design or hate it for its difficulty to clean and push-button design. I could probably be in either camp depending on what day you asked me. Like all converters, it’s not a particular joy to use. I find the button rather awkward to activate while balancing the section in the ink to prevent it from detaching and falling into the bottle. Finicky for sure. But it does hold a good amount and the little sliding agitator inside seems to do a decent job keeping the ink flowing. It is a pain to clean, but much easier if you flush it with a needle syringe. Even then, you can’t easily get to any ink that gets behind the plunger, and it’s hard to get all the water droplets out since a q-tip doesn’t fit through the opening. Not for the OCD pen clean freaks.

Nib – THE raison d'être for this pen is its family of #10 size nibs. You want it – the 912 has got it. From super narrow (posting) to super wide (stub) and everything in between – F, FM, M, B plus “soft” variants of all those. It has an extremely stiff nib that makes cool line variation (waverly) and an extremely flexy nib that make cool line variation (falcon or “FA). It is this last nib that adorns my pen and that I will address in more detail below. I should note that the FA is “extremely flexy” only relative to the rest of the Pilot nib selection, not compared to flexible dip nibs or vintage “wet noodles”. Some nibmeisters offer a modification, such as John Mottishaw’s “Spenserian” grind, that will take to the FA to that level of flex. However, while the stock FA may not really be a serious calligraphy tool, I must say that it can hold its own and is more than adequate for my dabbling and doodling.

The FA nib is a high performance instrument. Like other high performance instruments – sports cars, match-grade firearms, gaming computers, etc – it is finicky and requires upgraded components and consumables to get the best out of it. In this case, that’s the feed and ink. The stock plastic feed was designed for slowly lettering Kanji characters and is entirely inadequate for writing long sentences in the Latin alphabet. Fortunately, Flexible Nib Factory makes a direct replacement ebonite feed that does a much better job keeping up with the nib. Even with the ebonite feed, the FA nib likes a really wet ink such as Pilot Iroshizuku. Even J. Herbin Perle Noir led to skipping for me. Good thing I really like Iro.

With the feed and ink sorted, this nib just flies! It is such a joy to write with. It’s got a nice bounce and little bit of pleasant tooth, particularly on the upstroke. With a very light hand, I can get a reasonably fine line – even more so writing reverse. It looks closer to a European medium/Japanese broad with my normal writing pressure, which suits me just great. The nib responds to subtle inputs to add line variation at will. It’s easy to write as reserved or as expressive as I want. And if I really get cooking, I can produce extreme line variation for a quite passable Copperplate (although I need a LOT more practice). 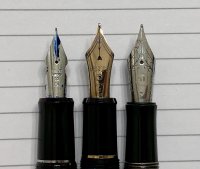 Value – This is not a cheap pen, but a good value. I paid a little under $200 with a coupon code from Pen Boutique. Depending on the nib, I’ve seen the 912 for as low as $170-$180 on the ‘Zon. So not cheap. But not a big step up from Pilot’s #5 nib pens. Also, Sailor’s full-size Pro Gear, the 912’s closest direct competitor, usually goes for quite a bit more. And European pens of similar size with a gold nib are routinely over the $300 mark.

Who should get this pen? Probably everybody! I really think it would fill a niche in just about any collection if you are willing and able to go to that price point. Want one, nice classic looking gold nib pen? You could do a lot worse than the 912 with a standard or soft F, FM, or M nib. Already have some nice pens and want one that offers a different writing experience than the others? 912 has you covered there too with its wide selection of specialty nibs. And as for the FA nib in particular, it’s a connoisseur’s nib for sure. I would not recommend it as someone’s first or only gold nib. And truthfully, if someone is serious about calligraphy, this isn’t the best nib for that either. But it’s a very fun nib and worth checking out if you like a soft, bouncy nib and want to go to the next level. So there you have it – my extremely wordy look at the Pilot Custom 912.