Back in the 1960s, Gillette introduced what I believe was called the "TechMatic."

It was a "band razor" that used an extended strip of razor steel, rather than discreet blades. You "changed blades" by flipping a lever to advance the band from a small feed spool to a take-up spool.

The shaves were awful, I believe because it was impossible for the head assembly to hold the band perfectly flat. It bulged in spots, leading to scrapes and cuts (at least that was my experience as I can best recall).

One year, everybody in the fraternity house was using them. A year or two later they were all gone.

Has anyone else had experience with this Godawful thing?

I had one, used it for a few months, and couldn't figure out why the latest and greatest technology from Gillette was giving me crappy shaves. It couldn't be the razor...after all, it was promoted by all kinds of celebrities and sports stars!

I finally wised up and pitched it into the trash. I think I picked up an injector at that point, but it wasn't long before I was using a Trac II.

BTW, I've got a TechMatic AND an unused cartridge sitting in my junk box if anyone wants it...just drop me a note and it's yours!

Snargle said:
I think I picked up an injector at that point, . .
Click to expand...

I think that's what I did, too. As I recall, I got a PAL stainless steel injector . . . then eventually bought a Hoffritz Slant. Never did own a Trac II, though I did use Gillette Good News disposables for many years.

As for your TechMatic, some things are best left undisturbed. LOL

I also switched from a DE to a Techmatic. IRC, I thought it was OK, but did switch to a Track II when it came out. I suppose I was listening to the sales pitch and looking for a better shave.

I dare say that with better technology today, the razor could be recreated without the inherent problems it had in the past. But I doubt there is much incentive to do so.

I always laugh to see the Techmatics selling on the 'bay for $50. I have one, new in package and a Schick band razor that was a thoughtful gift from my wife: http://badgerandblade.com/vb/showth...like-a-Jerk-my-wife-got-me-a-razor?highlight=
Don't know what I'll do with them......

Krona Kruiser said:
I always laugh to see the Techmatics selling on the 'bay for $50. I have one, new in package and a Schick band razor that was a thoughtful gift from my wife: http://badgerandblade.com/vb/showth...like-a-Jerk-my-wife-got-me-a-razor?highlight=
Don't know what I'll do with them......
Click to expand...

Krona Kruiser said:
I always laugh to see the Techmatics being offered on the 'bay for $50. I have one, new in package and a Schick band razor that was a thoughtful gift from my wife: http://badgerandblade.com/vb/showth...like-a-Jerk-my-wife-got-me-a-razor?highlight=
Don't know what I'll do with them......
Click to expand...

Fixed that for you...I've yet to see one actually sell!

True. I always see them with a few minutes remaining and 0 bids... 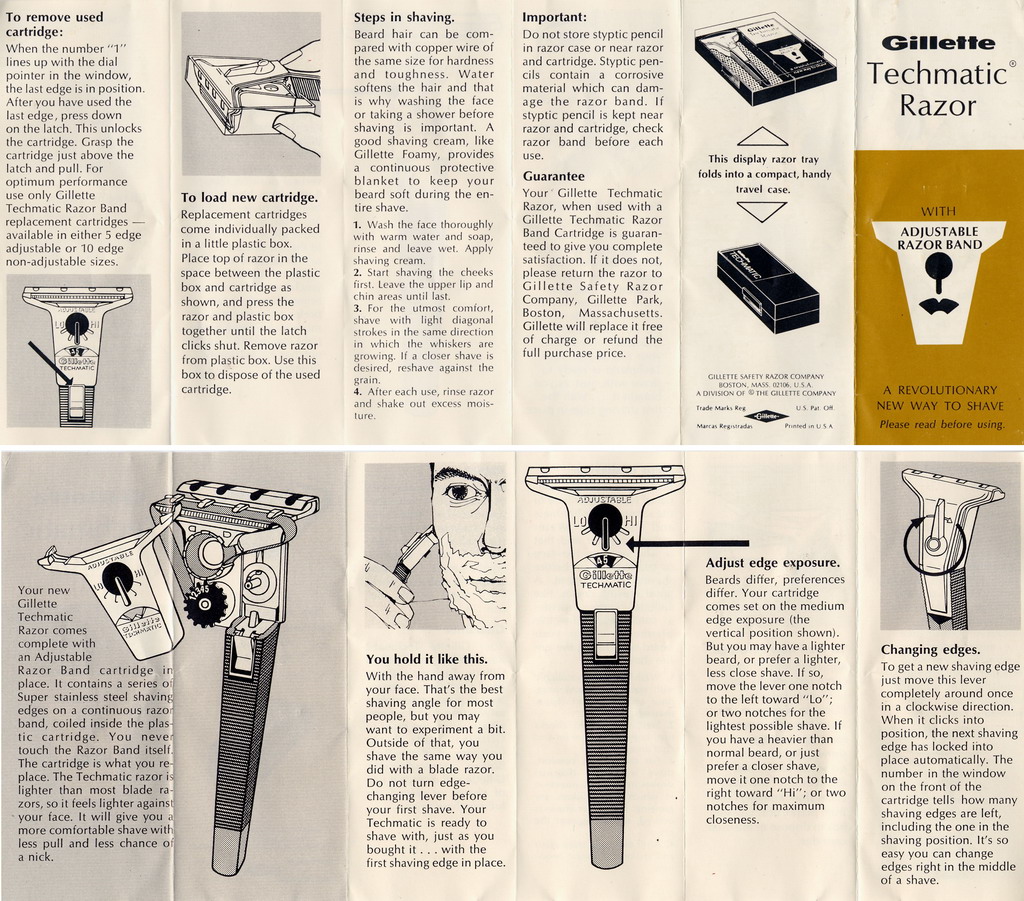 I bought a new one cheap- like 5.99 off ebay only to hold onto for a profit somewhere down the road for my Grandchildren. As I remember- these where really bad razors!

The Techmatic was my first razor, sophomore year of high school. Yep, it was a terrible shave.

Only good thing was being able to change blades in the middle of a shave with just a flick of your thumb, one-handed. Other than that - ugh.

That thing is quite possibly going to give me nightmares.

I mistakenly bought one off eBay as a newbie without fully understanding the distinction between a "Techmatic" and a "Tech" (facepalm).

Fontunately the other razor in the lot was a Krona in great condition, and it became my first DE experience. The Tech hasn't come out of the cabinet since I received it. I've added a 40s SuperSpeed and a nice Slim Adjustable, but I'm sure the value for the Techmatic will skyrocket - its only a matter of time, right?

I remember using one for a brief time while in the service. That was back in the late 1960"s, and I remember not caring for it at all.

Many were sold. Few remain. That ought to tell you something. The majority of them got tossed, instead of stored in the attic like DEs.

I have one but just for collection sake. Say didn't the Apollo astronauts take these into space?

Should have left 'em there.
You must log in or register to reply here.

N
The Ming Shi 2000s and Gillette Slim Adjustable Razors: A Comparison and a Review