"I took out a Chihuahua!"

Ten months later & I have yet to fire, let alone, load a single 9x25 Dillon round...

Last January I placed an order for a (Glock 40 MOS) 9x25 Dillon-chambered barrel from Bar-Sto Precision & three months later, it shipped ... me, I was working out of state, so the barrel sat on the reloading bench next to an (also) unopened set of 9x25 Dillon dies. Arrived back home about a month later, but weeks passed before I was finally freed up to commence fiddling with the 9x25.

Unwilling to part with an additional $150-ish (shipping to; barrel fitting fee & return shipping) to have Bar-Sto fit the barrel, I set about & was successful in mating the barrel to the Glock 40. Now, it was time to commence reloading a few 9x25 dummy rounds ... following no small amount of time spent perusing archived forum threads for 9x25 reloading info, I then transformed five new 10mm Starline cases into five 9x25 dummies.

Plunked those dummies into the barrel & immediately discovered that the case shoulders needed to be tweaked, as they protruded .003 to .004 proud of the barrel hood ... using Redding, RCBS & Hornady 10mm case holders, I adjusted the press to various cam-over settings. Try as I might & having initially trimmed the sized cases to archived specs., I just couldn't get the cases to fit the recommended .002~.003 below the barrel hood. Walked away from the bench & a couple days later called up Bar-Sto.

Talking with B-S tech support & the person suggested that I return the barrel with 5 sized, empty 9x25 cases so that they might finish ream the barrel chamber. A couple weeks later i get a phone call from Bar-Sto owner, Irv Stone III, who fortunately intercepted my 9x25 barrel before it was reamed. Having measured my sized cases & then the barrel, he determined that the Dillon sizing die was to blame, as my case shoulders specced out exactly to 357 SIG dimensions. Stone said, I can tweak the barrel chamber, but at 9x25 Dillon pressures, you're going to experience unpleasant case separations! Irv suggested that I contact Dillon Precision re the quandry & to quote him re the sized case specs.

A few days later Dillon issued an RA# along with instructions to return the Dillon die set, along with a few additional sized cases. They wanted to fill the sizing die with a compound which after setting up would be removed, revealing the sizing die's internal dimensions. Weeks went by, the barrel still up in Sturgis, sitting on Irv Stone's desk & the dies, who knows where in AZ?? I reinitiated contact with Dillon Precision and a couple days later received the following from them:
"Hi Devl...', We have a new die set on order, but we're waiting for carbide inserts so we can make the set.'
Thank you!
Dillon Precision

I called Irv Stone, who was not surprised to hear about the out-of-spec die nor Dillon's commitment to excellent customer service. Fifteen dollars & two weeks later, the Bar-Sto barrel was back home along with an invoice which read: "Evaluated the barrel chamber dimensions. Found Dillon Sent Wrong Dies."

Meanwhile, Dillon Precision & I are still patiently waiting on those carbide rings...

Morale of the story, you ask? Well, I suppose good things do take time. That, and I have zero complaints with Dillon Precision & naturally, Bar-Sto Precision ... they are two heavyweights atop of their respective heaps who have not forgotten how they ascended there.

Good luck with your 9x25 adventures! We look forward to further reports!
R

You have far more patience than I, sir, and I am considered a patient man! Not referring to any complaints against Dillon or B-S, just some of the horrible meandering trails involved with custom & semi-custom work.

Best of luck! I'm sure you'll be grinning when it all comes together!

Ya know, I had a similar experience helping my friend with some 300BLK. Couldn’t get the sized brass to pass the case sizing tool I had. After many days of head scratching my friend just gave up and sold all the BLK out stuff.

"I took out a Chihuahua!"

@Kentos … I can understand that.

If the lead-times on Dillon’s website are any indication, I will be waiting a long, long time for (correct) replacement dies

. Oh well, I have thrived for decades sans anything 9x25-related, so I have no problem waiting, say, another couple years or so (again,

When I have the free time, I am going to make up & plunk a few dummy rounds using the Starline/Double Tap 9x25 brass. If need be, I might actually be able to get by with running those cases through a 10mm sizing die. 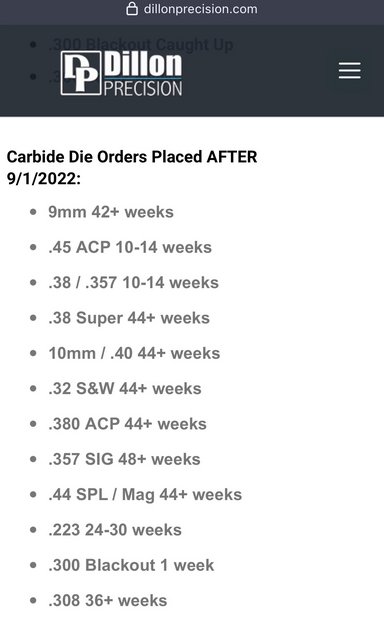 Kentos said:
Ya know, I had a similar experience helping my friend with some 300BLK. Couldn’t get the sized brass to pass the case sizing tool I had. After many days of head scratching my friend just gave up and sold all the BLK out stuff.
Click to expand...

I've had factory ammo that was out of 300 Blk spec! Got that cutaway sizing die and check each round now.

My reloads are perfect, but have seen both factory and "reman" ammo not fit ...

Manufacture of Safety Razors and Blades (1938)