A few weeks ago, @johnwick generously sent me a sample of Captain's Choice bay rum shaving soap for evaluation. (Thanks, John!) Below is the optimum lather table and review of Captain's Choice shaving soap from my lather optimization guide in the ShaveWiki. Captain's Choice needs a relatively large amount of water to produce good slickness, but the soap produces an airy lather, and for me, the post-shave is dry with a significant amount of irritation or burning feeling. Overall, it is the worst soap or cream that I've optimized so far. 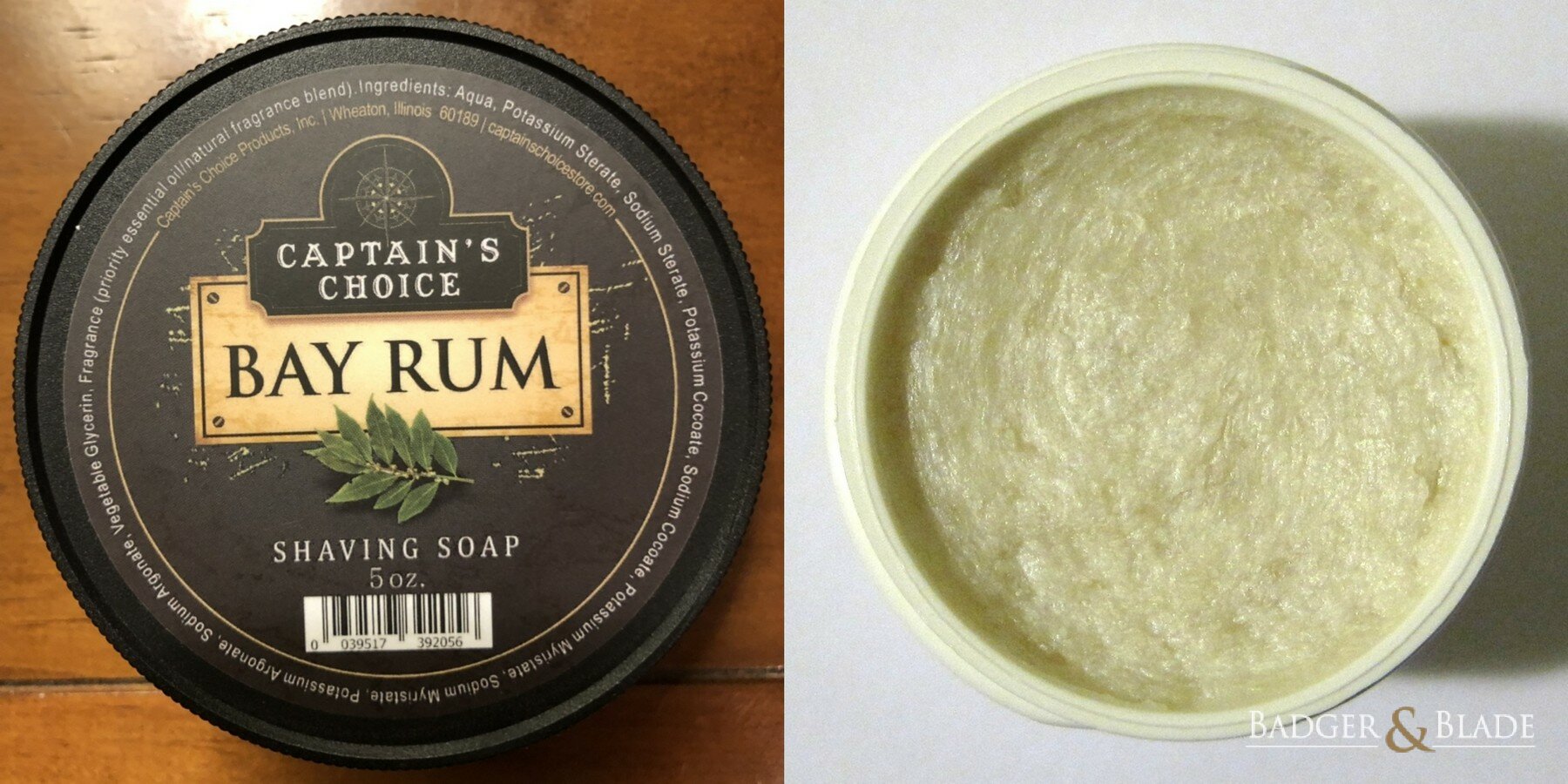 Purchase Date: October 6, 2018. A sample was received on December 4, 2018, from @johnwick, who generously donated the soap for evaluation. The sample was then placed in a small jar and photographed. The photograph of the original container was taken by John.

Scent: Described by the manufacturer as "a delightful bay scent" with "hints of cinnamon and citrus", the scent is not something that I really like, but it does not offend me

Hardness: Very soft for a shaving soap, more like the consistency of a thick cream

Optimum Lather Overview: Sheen is largely matte. Lather is very airy and yields stiff cloud-like peaks with no yogurt-like behavior of "stringiness". Adhesion and application are not good because lather is so airy. The scent is not noticed. Slickness is generally good with some pretty good and okay moments, a few very good moments, and a few moments of moderate friction. Cushion/protection is very little, basically nothing. Post-shave is dry with respect to moisture and bad with respect to comfort because of significant irritation that starts before the shave is over and peaks afterward.

Ranking Details: No ranking tests were needed to confidently place Captain's Choice at the bottom, right below Sudsy Soapery.

I personally have No problem with captains choice and the lather is thick and slick
Post shave is Very nice. My Face likes it..

I have some Captain's Choice soap samples that I have to try. I must now to see how they work for me.

I had a sample of the Bay Rum soap and after 3 below average shaves it got binned. The scent was nice but it was ‘grainy’ in texture which I disliked.

Glad I removed it from my den.

Agreed but even this didn’t assist.

Hmmm, no love for either Captain's Choice or MWF, which in my books are both great products.

Does this mean I have to do a Costanza and invert your list?

I have several CC soaps and creams. They all work well for me.

I have tried the Lime and Sandalwood and got good results from both. Like many soaps, I found using them several days in a row improved their performance.

Hmm. Guess I was wrong when I thought CC was giving me great shaves, the numbers can't lie. But, I don't have a scale and such when I shave, I just build a great lather and enjoy it.

Did not like the Bay Rum at all.
R

All published research papers are subject to peer review. In this case, looking at your data, the two soap bases for which you give the lowest performance ratings also have the lowest soap mass data, values about half of what you reported for the soaps in the top half of your chart. Yet, the amount of water used was similar for most soaps. With too little soap, it is no wonder that your lather was thin and airy. Too little soap also explains the poor post shave. I suggest you go back and try to increase the soap to 1 g and see what you get.

I do not keep track of the exact amount of soap and water I use for each shave, but I do evaluate soaps on their performance and keep track of the results in a Microsoft Access database. I have evaluated 36 different soap bases and over 90 individual soaps.

In the case of Captain's Choice Bay Rum, it is my favorite bay rum scent. Some bay rums have too much clove (like Ogallala) and irritate my skin. From a performance standpoint (with sufficient soap used), I rate Captain's Choice as follows: easy to load, easy to lather, excellent slickness (both primary and residual), excellent cushion and very good post shave. I consider it to be an "A" level soap. I do have some "A+" soaps, but they are significantly more expensive than CC. Thus, I consider it to be a good value.

I won't comment on the performance of The Sudsy Soapery as I was unable to give their soaps a fair evaluation. I tried samples of several scents and they burned my face immediately, so I could not evaluate the shave. However, the soaps readily made a good lather and probably would have gotten a decent rating had they not irritated my face. I tend to do better with complex cologne type scents where one or two scent notes do not predominate as they do with TSS soaps.

the results dont surprise me the least. This is a horrible shave soap that left my skin extremely irritated due to dryness. I threw it away after 2 uses.

Looking at the numbers, I am a bit confused.
The ratio used, product:water, is 0.44:9.68. As I look at it, compared to the top-rated product, these are not equal ratios, or even close. The top product uses a ratio of 1.20:9.60, or 3x the amount of product for about the same amount of water. Wouldn't watering down the "top-rated" product create diminishing returns?
Please help me understand the "science" or methodology used, as it seems a bit unequal. @rockviper right. I like both, opinions and science, however as a closet research nerd and curious guy, I love science, proofs, and data. For example, I have weighed ~90% of all of my vintage gillette DE handles, with special attention paid to the Pocket Edition handles(28g-40g) just because. The data has helped me understand my opinions(I like a thin 33g & 34g handle and a thick handle if it is heavier, 38 & 40g).

I used CC Lime a ways back & it was OK IMO. It did leave my face dry but, other soaps do this as well.

But you still haven't been able to lather Mitchell's Wool Fat? Can't believe any of it then.

You can believe all of it. It is his results with it. You might have different results. Starting your own table would be useful.
You must log in or register to reply here.