Are the Crabtree&Evelyn male scents gone for good?

Contributor
I really like the Crabtree&Evelyn older scents, Sandalwood, Sienna and Nomad. They were fantastic in my opinion, especially the Sandalwood. It still got a bottle and a half of it and I dread for the day when it's gone. It's my absolute favourite scent and it was very liked by my late wife as well, she said that it reminded her of the backpacker year she spent in India.

Around 2014 C&E reformulated their product lines. Their shaving soap became a bit better, but were still sadly enough rather mediocre. Their scents changed for the worse, but were still very good and I found a new favourite among them, West Indian Limes that I now have two bottles of.

My question is; does anyone know why and if they're closed down for good?

I still have a ring of Sienna Shaving cream (now more of a croap) in the bottom of a tub that I got decades ago. It's still nice to use, but I go months between shaves with it, and I use a Wee Scot with it.

Sad to read this, if it is true.

Although I never really used C&E steadily I liked their Sandalwood shaving soap, especially the vintage ones. To me they were a dead ringer for Trumper's Sandalwood cream which I also have a fondness for.

Afraid so. On a whim I looked them up, and they don't have anything to speak of for men. I have their Sienna and Nomad colognes, they are really good. Guess rationing will be needed on those two. Ebay surely has things at ridiculous ripoff prices because of no availability now. Caswell Massey doesn't have much either. So the centuries old druggist purveyors of mens grooming needs have gone away. A shame.

Sienna was a fabulous scent. Didn't care for the shaving soap itself much though.

Contributor
Thank you all for your kind answers. Scents often carry strong memories, but there's nothing productive in dwelling on the past.

hydro-magic said:
Sienna was a fabulous scent. Didn't care for the shaving soap itself much though.
Click to expand...

Though I never smelled the cologne, I thought the soap scent was kind of in the realm of Halston Z-14.

Contributor
These guys bought them in 2015.
B

I still have my pucks and bowls of the old c&e soaps. I bought them in 2009 probably? I use them a lot but seems like I never made a dent. 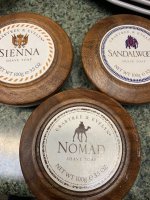 Still have perhaps half a puck of C&E Sweet Almond shaving soap. Marvelous scent! Was wondering just yesterday what fragrance would go best with it.

Sad to hear that they are gone. I loved Sienna and also Sandlewood. My wife loved Nomad. These were pretty decent quality products.

Contributor
I just ordered an extra bottle West Indian Lime EdC and a bottle of Aftershave Balm from one of two vendors that still had them.

So the West Indian Limes my wife got for me is discontinued?

BrooklynSalt said:
So the West Indian Limes my wife got for me is discontinued?
Click to expand...

Yes, but there still are a few bottles left.

I have a half a tub of their stuff, it should last a lifetime.

The scents were very nice, but the soaps were average in terms of shaving, and definitely not a great value. The only good soap, in terms of performance, was C&E Almond, and I still have some in fact.
T

Polarbeard said:
I just ordered an extra bottle West Indian Lime EdC and a bottle of Aftershave Balm from one of two vendors that still had them.
Click to expand...