This thread is for discusion of the review at http://www.badgerandblade.com/vb/showthread.php?p=59173 .

Great fragrance...too bad it fades so quickly. I don't know if I would ever want to drink this though. Thanks for the history on this item Howard.

GeeQue said:
Great fragrance...too bad it fades so quickly. I don't know if I would ever want to drink this though. Thanks for the history on this item Howard.
Click to expand...

I see that the press release I linked to has been removed. Perhaps they reconsidered the wisdom of giving out the old recommendations for internal use. Fortunately I saved it. (For historical purposes only. I am not recommending you drink the stuff.)

The exact composition and recipe for 4711 Genuine Eau de Cologne is still subject to the strictest secrecy.

Only the main ingredients of 4711 Genuine Eau de Cologne are widely known: essential oils extracted from special citrus fruits; small amounts of rosemary and lavender are also included. Dissolved in pure alcohol (85% by volume), the mixture must be allowed to mature for a long period of time so that its unique effects can fully develop.

As early as the 18th century, Eau de Cologne already had many devotees who valued it highly for its special properties. Eau de Cologne was employed as an aqua mirabilis for the relief of a wide variety of complaints. One cannot praise this water highly enough to do it justice; its power exceeds anything that one could say about it; and the ongoing experience of its penetrating effects that are evident daily in the case of countless ailments and persons of all types and ages is such convincing proof that we are well justified in bestowing the name miraculous upon it. These were the words used on a Wasserzettel (instruction leaftlet) in 1727 to extol the waters effects.

At that time, each small flask was accompanied by such an instruction leaflet that described and explained the uses and effects of the water in detail  saying, for example that young people could take 20 to 30 drops internally, mixed with water or wine, and older persons 50 to 60 drops: This brings about the best results to slow a racing heartbeat and it relieves headaches when sniffed through the nose.

The advertisement of Eau de Cologne as a healing remedy came to an end, however, in 1810, when Napoleon Bonaparte issued a decree demanding the divulgence of secret recipes for all medications.

But the manufacturers of Eau de Cologne were not willing to accept this decree. Therefore, they decided to give their product a new image and offer it instead as a toilette water for external use. The instruction leaflets were changed accordingly:

This water, composed of the finest, most spirituous and highly fragrant aromatic substances produced in the botanical world, is already so well known and highly regarded throughout the educated classes of Europe  even in foreign countries  for its wonderful properties, that it would be superfluous here to say much more in its praise. It is thus all the more justified in claiming first place among all fragrances - simple as well as mixed - since its use in washing or after a bath has an exceptionally stimulating effect.

By presenting this new image, the manufacturers were able to avoid divulging the recipe. Nevertheless, this was also the beginning of a misunderstanding that has remained in effect up until the present century: From that time on, 4711 Genuine Eau de Cologne was extolled and marketed as a toilette water.
Click to expand...

The info is still on their site, you just have to search for it,... 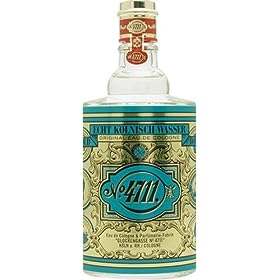 I picked up a 13oz bottle of this at Bed, Bath, and Beyond and like it a lot.

The scent is not for everyone, but works well for me. A lot of folks describe a citrus scent, but the predominant note I smell is of jasmine. I know jasmine is not part of the formula, so it might be the cologne reacting with my own body chemistry.

The stuff I have fades fairly quickly, so I initially thought that I may have bought the splash vs. cologne, but as I read the reviews and look at photos of different sized bottles, I'm beginning to think there's only one product, and that the terms "Eau de Cologne" and "Eau de Cologne Splash" refer to the same thing. Am I right? There seems to be no distinction I can see on photos of actual bottles that would indicate a difference.

I like this stuff. Old fashioned, but light and uplifting.

I have the 24 ounce bottle (or the biggest one I could find). I love 4711. I usually use it to scent my hankies--it lasts all day this way

I've been looking for some type of splash-on EDC that's not too strong, but cooling and refreshing as we head into the summer.

Last year I grabbed a bottle of Pinaud Bay Rum, but that stuff is a little too strong in the clove dept for me.

I'm thinking the 4711 might be a good thing to keep in the fridge at my office to freshen up with on those sticky summer days. Of course, I could run the A/C, but what fun would that be?

Florida Water might be another option as well, Walter. 4711 is nice though.

Roger & Gallet is also an option. I saw one of their wicker-wrapped cologne bottles in a store the other day--it would be pretty cool for the historically-minded user.
You must log in or register to reply here.