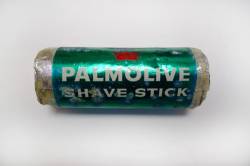 Pros: Fantasic performance
Cons: Long gone
I have just found myself a second one of these sticks, and to say I am pleased would be an understatement. Why? Because they are about the best performing soap I have ever tried. And I've tried a LOT of soap. Both my sticks came hidden in old dusty travel kit tubes, and the labels on both have disintegrated somewhat, so if you are lucky enough to find one it will probably need some cleaning up. But do, it is worth it. The lather these sticks create is better than the highly regarded modern Euro version, and a lot better than the current Aussie version, which has no tallow. I have no proof, but I actually think that the reason it works so well is that it has more tallow than modern soaps, and possibly it is a little softer than modern shave sticks, allowing more to be taken up by your stubble when face lathering. Whatever it is, I'm happy, because my second stick allows me to use it more regularly in my rotation. I was rationing the first stick like crazy. Don't be squeamish about old soap. Try it. You might find that it is another product which "they don't make like they used to."