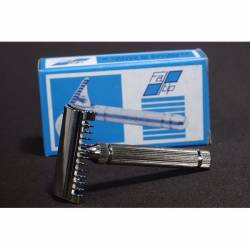 Pros: weight, aggressiveness
Cons: length
I got this through Panjo and I this is a wonderful little fellow. I had one of the best, BBS shaves of my life with this, a Feather blade, Cella soap and a Vie-long horsehair brush. Lots of blade showing, but I didn't feel any bite shaving. The combs are smooth and not scratchy (like the Gillette old types) and with 2.5 passes my face and heard are positively shining! My only complaint is the handle length. I have large hands and find the shorter handles sometimes hard to maneuver. I understand this is designed to be small (I couldn't pass up the price).

Pros: Plenty aggressive
Cons: Finishing & Handle Size
More often than not, I tend to favour open combs, with the R41 being my go-to razor. I had heard a lot of good things about the Fatip and decided to give it a try.

First, let me get the cons out of the way. As many have noted before, the finishing quality does leave a lot to be desired. This isnt exactly a precision instrument. I had apprehensions about getting those grains of metal jutting out of the inside of the top plate. Thankfully my copy didnt have this issue. But instead it had another one. There was a lot of play on one of the side screws which meant the blade would never sit symmetrically unless I carefully adjusted it while loading. The other issue is the small and slim handle. The razor always has a tendency to slip out of my hands.

But when it comes to shaving performance, the razor doesnt disappoint. Simply put, I found this razor "deceptively aggressive". Thats because unlike the R41 which gives you that trademark feedback while it mows through your beard, the Piccolo doesnt give much feedback at all. Which means if the user isnt careful, its very easy to get razorburns. Of course the aggressiveness is a touch less than the R41 but the difference isnt much.

I would readily recommend this razor to anyone who wants to try an open comb on a budget. Fantastic value for money

Pros: Aggressive Smooth Open Comb Safety Razor Non-adjustable 3-Piece
Cons: The finish is not as good as other current products
The Fatip Piccolo is an open comb, 3-piece that has become my favorite razor. It delivers a fast and smooth shave for me in just 2 passes. I could never achieve this with any other razor. It is considered a fairly aggressive razor by most peoples standards but for me and my beard it just works. This is the only razor I have used that gets my jaw line smooh without a lot of buffing. I find I can get a decent shave with most blades although I find that Astra SP and Wilkinsons work best for me.
The only down side tht I can see to this razor is the finish is not as high as other current modern razor. You can see some machining marks on the head. The blade alighment has never been a problem for me. The blade fit is not as tight as other razors. Overall I am very pleased with this razor