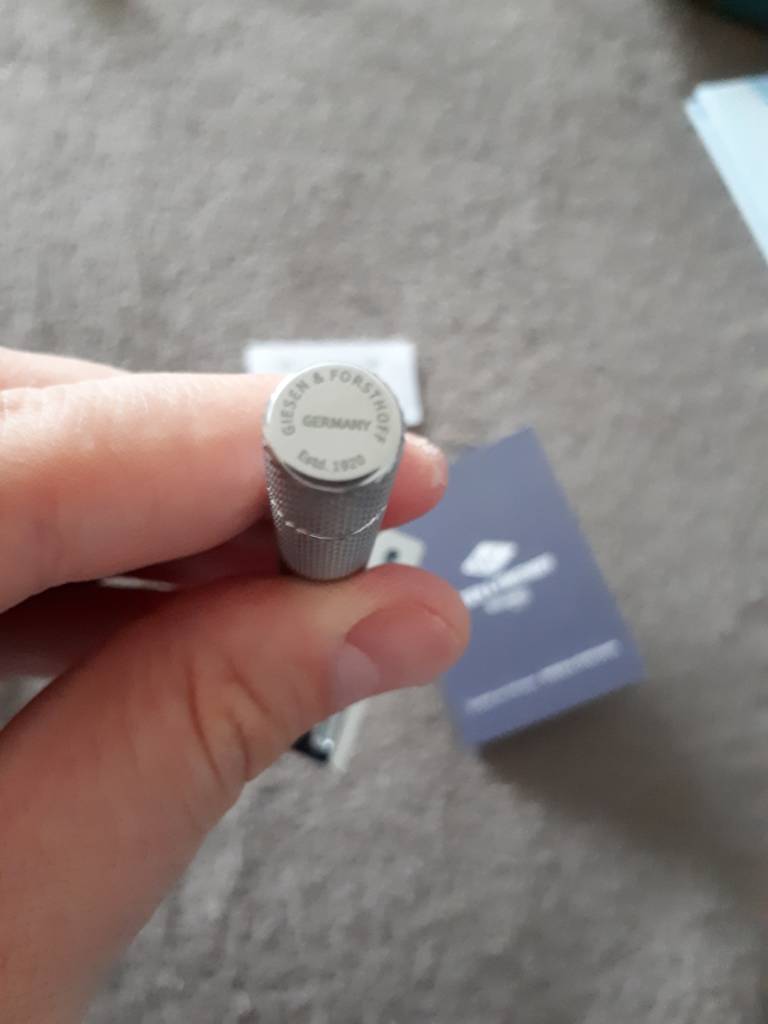 This razor is a piece of art, I must say.

The gentle shaver line is an entry way to Giesen & Forsthoff (a company producing blades, scissors and manicure sets since 1920, now owned by the third generation of the Giesen family) safety razor range. It comes in four variants short (80mm) and long (100mm)handle, open or closed comb. The chrome plating on the had is very nice, almost like Mühle, one would say. The topcap and the baseplate both have 'Made in Germany' engraved on them.

Now, for some backstory; G&F is based in world-renowned city of Solingen, or 'blade city'. It is still a family owned business, now in the third generation. Though being known in the past for straight razors, they also started adding safety razors to their assortiment in the past. Judging the community response, the first gentle shavers, which seem to be rebranded TTO Weishi's, were not that well accepted. Later, the three piece razors were added, and these are fully made in their workshop in Solingen (a rarity these days, with most of the good being produced at least partly in China or Pakistan).

The problem with these razors is they tend to be on the exotic side, because:
- they are available, but not at as many retailers as maybe some other razors (at least from the European perspective) (for certain they are on stock with G&C, Connaught, and woodberg.de).
- their marketing/online presence is 'slow'.
I sure they make both better, and move out of a regionally known product, because their product line deserves global and massive recognition!

The shaver, though arguably more mild than R89/EJ89, is, in my experience and some of the German wet shavers whose reviews I read, more efficient. So it should be a holy grail for those looking for a tad more efficient, while milder razor than the industry gold standard which is R89. The topcap covers the razor in entirety, so there are no edges protruding from the sides, which si a plus. The angle of the shave is very intuitive, the balance is the most perfect I've encountered in safety razors to date, and as I said, you'll get a BBS with ZERO irritation, even if you're like me - coarse beard but sensitive skin.

The downside is, the whole head is Zamak. Even the threads. I wish all companies would take up Mühle's example and make at least the threads in brass. This is what would definitely prolongue the life of our razors, as they are the first to snap or rot. If ti snaps off in your handle, you can render a perfectly good stainless steel handle useless, which is a pity.

Pros: None
Cons: Read on
Last comments by OP, with his permission:

Pros: Very efficient on 3 passes while still being R89 type mild. Stainless steel handle, competitive price.
Cons: Even the threads on the head are Zamak.
The razor is fantastic, a great upgrade to R89 type of shaving. Because of the full stainless steel handle it's on the heavier side. It delivers a more efficient but milder shave than R89/EJ89. The head covers the edges of the blade entirely, so no edges are protruding on the sides. The balance is great.

A fantastic item at a great price.