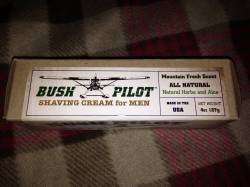 Ingredients: All natural formulation including aloe and witch hazel. (Rank: A)

Scent: The &quot;mountain fresh&quot; scent is light, clean and non-offensive. To my nose, I would say its similar to Palmolive Classic or the like. (Rank: B)

Latherability: The cream really struggled in this category. When both face lathering and bowl lathering, I had difficulty developing a lather with an acceptable amount of cushion. Also, the lather was very unstable and dissipated on the face rather quickly. (Rank: D)

Slickness: Although the cream definitely has lather issues, the lather I was able to create provide an acceptable amount of glide/slickness. It is definitely not the slickest of creams, but seemed to do its job in preventing razor burn. (Rank: C)

Smoothness: Bush Pilot provided me with an acceptably smooth shave with a bit more effort compared to other creams at this price point due to its previously mentioned latherability issues. (Rank: B)

Moisturizing: Compared to other creams at this price point, Bush Pilot left my face feeling a bit dry (though not overly so). (Rank: C)

Post-Shave Irritation: Feedback from my usual splash of Thayer's WH aftershave revealed perhaps a bit more so than I am accustomed to. (Rank: B)