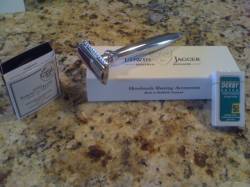 Pros: Design, finish, balance
Cons: None
The Lined Bulbous is my favorite razor. My favorite used to be the Chatsworth Barley, but this razor has better balance. This razor is a real showpiece - it is beautiful and elegant with a jewel-like quality and flawless workmanship. I find it easy to get a good shave with this razor. I own more aggressive razors and they have their place, but for a nice, luxurious shave and a feeling of well-being, I think this is the best there is. I started with Derbys but now use a Feather - it requires a bit more attention than the Derby, but the results are better too. You will really love the way this razor feels if you have big hands like I do.

Pros: Weight, balance, design, feel
Cons: Weight, grip
I was so impressed with Edwin Jagger's de89l's build quality and performance that I decided to go for the (almost) top-of-the-line Bulbous. I wanted an heirloom-quality razor that felt and looked luxurious in my den. I was not disappointed. Price: I've seen these advertised consistently for $130. That's over three times the cost of an entry level Edwin Jagger and within striking distance of Merkur's top-of-the-line adjustable. Is it worth three times as much? That answer is very subjective, but I'm going to make the assumption that anyone considering this razor is not looking for value. They are looking for for a razor that elicits style and quality. When compared to other high-end razors (Pils, Ikon, Feather) then it's an outright bargain. Quality: The finish is flawless. There are no inconsistent gaps, blades rest perfectly inside the head, screwing the head into the handle is smooth and effortless, and I couldn't find a single machine mark on the razor. User Friendly: This razor weighs in at 114 grams (from the spec sheet). Going from de89l, which is about 2/3rds the weight of this razor, was a shock. The Bulbous is no Ferrari. Strokes must be planned in advance. The momentum of the razor, however, makes for clean and efficient passes. WTG passes are almost effortless because gravity does all of the work for you. Care must be taken around the nose and lips because one slip of the grip could mean a nick on your lips or neck. Speaking of the grip, the version I received is the chrome finish. I've seen two other versions; the lined and satin finish versions. Initially, I thought that the slick surface combined with water and its weight would make for a perilous journey. Not so. The handle is over an inch longer than that of the de89l, so there's more surface area of your hand touching the grip. Also, the indentation near the top of the head makes it easy to steer the razor across your face. While a little knurling would have been nice, I never experienced any slipping. All of my passes were smooth. I did get a couple of nicks only because I felt so confident in my abilities, that I decided to go for an ATG pass (not my strong suit). The results were a better than BBS shave with just two small nicks. Ease of Blade Replacement: It's a three piece head design, the same as other EJ models. I had no problem changing out the blade. Aggressiveness: Supposedly this is a mild razor. I honestly couldn't image getting a smoother shave even with a more aggressive razor (without significant blood loss). Balance: It's heavy, but the longer handle makes it easier to grip. The majority of the weight is in the handle, providing a very stable head. The balance point of the razor is about 1 inch below the indentation on the handle. On the de89l, the balance point is much closer to the head of the razor so the razor feels very top heavy. It feels very heavy but natural in the hand. The weight, balance, and mildness of this razor were confidence inspiring. I received the closest shave I have ever experienced after three-passes with only a few nicks thanks to overestimating my own abilities. Chances are that if you're reading this, you already own an EJ. Is it worth the upgrade? To me, the answer is a resounding yes.