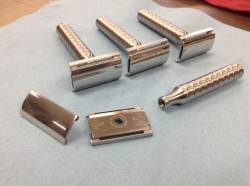 Pros: Unrivaled shave quality. Excellent build quality. A modern masterpiece.
Cons: The prototype handle was a little slippery, but was redesigned. The razor is perfect.
My beard is extreme. It is dense, thick, tough, dark, and it grows fast. Since I started wet shaving, I've been looking for a razor that was very aggressive, but didn't peel my skin off when I used it. By happenstance, I read the original announcement of the release of this new razor, and I ordered it immediately. I've been using a different, but notoriously aggressive razor since I started wet shaving, but I really wanted something made from stainless steel. Between the time it was announced and the time I actually got to use it, there was quite a lot of talk in the announcement thread. Of course, being a pretty high priced razor, there were high expectations. Since it was a very new product, I had quite a bit of interaction with John from Los Angeles Shaving Soap Company during my ordering process. By the time the razor had arrived, I was a little afraid and a little expecting that I was going to be disappointed in this razor. I have absolutely no stake in endorsing this razor. I'm not a paid reviewer. (Is there such a thing? Can I get that job? ) In fact, I paid, handsomely just for the privilege of reviewing this razor. I try to maintain my integrity and honesty above all else, and if this razor didn't live up to my expectations, I was going to have to be honest about it. John has been such a mensch, and he clearly has good values when it comes to customer service, but that doesn't make a razor great.

When I first opened the razor, the head felt so much like a Gillette tech that I was worried. It is approximately the same size, weight, and feel in the hand. As much as I think the tech is a great razor, aggressive it is not, and I wasn't looking for a tech with a heavy handle. I had already shaved the morning I picked it up at the post office, but I gave it a close visual inspection. Visually, it didn't look like it was going to offer a super-close shave. On top of that, everyone's idea of what comprises an aggressive shave is different. To some, it's the feel of the blade against the skin. To others, aggressive means "likely to shred my face if I'm not careful." Still other people insist that it's the speed and efficiency with which the razor shaves. To me, the only important measure of aggression is how close my shave is. Simply put: when I talk about aggressive, my single measurement is how smooth my face feels when I'm done, which translates into how long it stays smooth throughout the day. LASSC is advertising this as an aggressive razor, and I am expecting a close shave.

All of my worrying was for naught. The BBS-1 did not disappoint. First off, I did not get any nicks, cuts, scrapes, weepers or even minor irritation. Over the last year, that has happened maybe 10 times. Up until now, I've just accepted that the level of aggression required to get my face smooth is going to, by necessity, cause a little bit of bleeding and a little bit of irritation. With my baseline configuration, those things are minimal, but I almost always have at least one bleeder by the end of my shave.
The first pass went without incident, but with my face, that's almost always the case. I can do a WTG pass using a soup can lid, and I'm fine. It can a little disheartening at times, because I often try out a new razor, have a great first pass, get my hopes up that it is "the one," only to be let down by poor performance in successive passes.
Onto the second pass, which I normally try to do going XTG, with a little bit of ATG in places that I consider low risk. I never get nicks on my sideburns, for example, so I go ATG, hard, on the second pass almost all the time. Also, I never go ATG above my lip, so usually I shave XTG above my lip on the second pass, and don't even lather that part for the third pass. Too much temptation, and it always ends in heartbreak. The second pass was still very smooth, and I started to get excited. I was pretty impressed at this point with how close the razor was getting my stubble.
For the third pass, I went ATG almost everywhere. Ear-to-chin along my jawline (where I get 80% of my blood-incidents) using a pretty aggressive stroke. For me, this area is also the hardest to get smooth, which is probably why I often end up getting cuts there. But with the BBS-1, no cuts. Also, very, very smooth, with no tugging or pulling.
The other area where I get a lot of difficulty is my neck, going from the side of my neck to my Adam's apple. Even though I have a fat neck, there is loose skin right around my Adam's apple, and if I'm not careful, I can get pretty bad cuts there. Not today. Third pass complete. Baby Butt Smooth along my jawline, BBS sideburns, near BBS at my mustache, and some straggler hairs on my neck. The mustache hair and the neck hair can only be felt going against the grain, and to be fair, I have never gotten either of those areas BBS, so I can't consider that a failure. (I'm still chasing that particular white rabbit.) With the BBS-1, I got both areas highly smoother than average. Not the smoothest I've ever gotten them, but it should be noted that on my first shave attempt, I made a conscious decision to quit while I was ahead and to NOT go in for another pass. I might have been able to scrape off a little more hair and get a super-close shave, and I probably will be doing that in the coming days, but the shave I got with three passes was well above average.
Even with such a smooth shave, I applied alum as per usual and had no sting, which is very unusual for me. Another thing that I should note is that usually when I have a really good (i.e. smooth) shave, the shave the next day is fair to poor. It is one of the reasons I rotate razors so heavily. Well, the day before my maiden shave with the BBS-1, I had a near-perfect shave with a double-shimmed 2011 Mühle R41, so the deck was really stacked against the BBS-1. Even under those conditions, I would rate today's shave as just a tiny bit less close than yesterday's shave, and a whole lot more comfortable. What I'm going to be interested to find out over the long term is if I try to get just a little bit closer, will that cause all of the irritation that I am so accustomed to, or will the BBS-1 allow me to dial it in even a little more than I did today? Keep reading for the follow-up at the end of this post.
The handle that I initially received with the prototype was OK. It was an 85g handle, and had very, very good balance, but was a little slippery due to lack of a fine knurling pattern. Well, John was not content with this easily correctable flaw, so it is my understanding that based on initial feedback from the razor, the handle has been redesigned with some very nice looking knurling. As I write this review, I have not had the chance to try out the redesigned handle, but I have seen pictures, and it really looks like John fixed the slipperiness problem, while also making a very nice, and very unique looking handle. There is nothing that speaks more highly of a vendor's values than when he responds to customer feedback.

The BBS-1 is a pricey razor. When I started into wet shaving, I would not have considered a razor at this price point. However, since I've progressed in my hobby, I have come to appreciate the value of a really high quality tool. You will only ever need to purchase one of these, and in my opinion, it is the finest shaving implement currently available for purchase. I have over 50 razors, and this one far and away beats them all. If you have the means, I would highly recommend purchasing this razor. I whole-heartily believe that the cost of this razor is justified, as the manufacturing techniques to make an instrument of such fine precision and quality are not inexpensive. I don't believe this to be a flashy status icon. It is an incredibly high performing tool. The fit and finish are easily in the same league as the Razorock Stealth, Tradere OC and Above The Tie. The blade centered itself easily, the fit is very tight, and the blade contact with my face was extremely uniform. There were no visible blemishes on my product, and it appeared to me that a lot of time and care was taken to ensure this razor came out perfect.

I have been using this razor for a week. First off, the fact I have been using it every day really says something. Since I started wet shaving, I probably have never used the same razor more than two or three times in a row. Generally, I like the variety. However, the BBS-1 has provided me with the most hands-down best shaves I have ever gotten, that I have absolutely no desire to pick up any of my other razors. Each day I've used it, my shave has gotten a little bit better, and this morning was probably the best shave I have ever gotten from any razor. Absolutely no sting. Absolutely no cuts. The shave was smooth and effortless, and 10 hours later, my face is still smooth. I've tried several different soaps, blades and prep routines, and the BBS-1 have not had anything resembling a poor shave.
This razor is truly remarkable. I really did not give this razor a perfect score lightly. I believe I approached every aspect of evaluating it with a keen eye on remaining objective, and still, I am so thoroughly impressed by every aspect of this razor that I'm going to have a hard time using anything else. The BBS-1 is the perfect shave I've been chasing since I started.