Two Han Solo pens in one 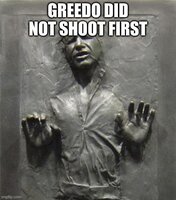 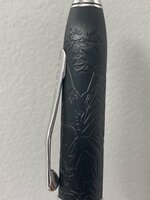 Not a bad likeness. 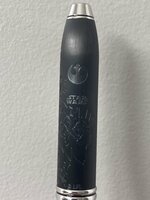 Ah, Star Wars logo. Just in case I didn't know what the heck this pen is. 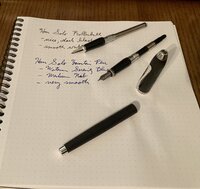 Is it a rollerball or a fountain pen? You might say its a cross between the two. Oh, I'm so punny!

I've only had this pen for a few weeks, but long enough to put out a few initial impressions. Let's start with the negatives, just to get them out of the way. I don't love the Townsend's style. The clip is too low on the cap. The cap has a weird bulbous shape. The whole thing is too long and skinny and makes the nib look small. I would not be drawn to this pen without the Star Wars artwork. There, I said it.

Now for the good bits. I LOVE the Han Solo theme. The "frozen in carbonite" shtick is genius. Probably the most low key Star Wars thing ever. From a few feet away, the pen is just a nice, classy gray pen. But up close, the fun starts. It's great. Secondly, I love the interchangeable rollerball and fountain pen sections. More pen models should have that. It really does make this like two pens in one! The rollerball writes great, like a rollerball should. The fountain pen nib writes great too. Nothing special - just a stiff, round-tipped nib that makes a clean, meaty line. It feels very similar to a Jowo steel nib, although I believe Cross makes their own nibs in China. The medium looks more like a broad on the page. So three cheers to Cross for selling the nib section separately. It was also nice to convert the Han Solo rollerball pen into a fountain pen for significantly less than the actual Han Solo fountain pen sells for. Grant it, that pen has a gold nib. But I have a hard time believing that the gold nib is worth the three-figure premium over the steel nib. I'm sure the gold nib feels nicer on page, but it would really be splitting hairs since the steel nib is so good.

This will be a fun pen to take to work and switch between the rollerball and fp nib depending on the writing task at hand. If you like Star Wars and you like pens, then this is your chocolate and peanut butter right here. There's still a few Cross Star Wars pens out there, so grab one while you can get them at a reasonable price. If you don't care so much for Star Wars merch, but like the idea of pen that can take either a rollerball or fp section, than the regular Townsend is for you (if you like the styling). Its a cool pen and I'm glad I had the opportunity to pick one up. 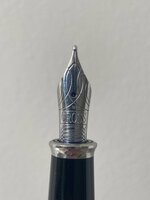 If Star Wars nerd you are, very nice it is. How much, ask may I?

Not as nerdy as some, but nerdy enough

I got the rollerball on sale + 10% code for $80. The fp section was $30 and the converter another $9. Last I looked, you can still find the rollerballs for around $90, but the gold nib fountain pens look sold out on most of the reputable pen retail sites and are $250 and over on ebay and amazon.

Great review and it looks like you got a great deal. The two in one makes it worth it by itself. I like the black look and that will probably be a durable finish.

Nice, I picked up quite a few Star Wars FP from Schaefer.
You must log in or register to reply here.

Pens & Razors - Compare Your Collections - What Are Your Go Tos?