Happy New Year and Welcome to the B&B Speakeasy Spirit of the Month!

Our selection for January 2010 is Drambuie! 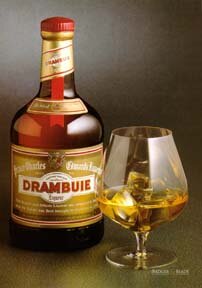 ​
Gents, this is another spirit selection plucked from the more recent replies to the Spirit of the Month Suggestion Thread! And I must say I agree with those who sing it's praises in the cold Winter months. A fine choice for relaxing in the glow of your fireplace.

So what is it?

It's scotch. Mostly. Flavored with honey and herbs, making it an (albeit 80 proof) liqueur. Typically, this is an aisle of the liquor store that I spend very little time in. Keep some Cointreau, Amaretto, Bailey's and Kahlua on hand, and usually I'm all set for my liqueurs for several months. But after the "big 5" base liquors, Drambuie is one of the most versatile bottles you can have in your arsenal. Warm and sweet with only the subtlest scotch "bite" (owing to the blend of smooth Highland and Speyside malts) neat or on the rocks, great mixed with ginger ale or soda and a twist, as a sour (back way off on the syrup), or as a Manhattan (probably should call it a Rob Roy), or in the classic "Rusty Nail" cocktail which is simply Drambuie and blended Scotch whisky stirred over ice. Measure to your own taste, but 1:1 is a good place to start.

[imga=left]http://www.badgerandblade.com/forum/media/19390/full[/imga]The name comes from the Scottish phrase an dram buidheach,meaning "the satisfying drink." It was first served at the Broadford Inn in 1893, although an apocryphal legend involving Prince Charles Edward Stuart's asylum on the Isle of Skye following the Battle of Culloden in 1746. Drambuie was first marketed globally in 1910 from Edinburgh, having been available in the US and France for some years previous. Sales were slow initially, although in 1916 Drambuie became the first liqueur stocked in the cellars of the British House of Lords. Drambuie is currently celebrating the 100th anniversary of it's first widespread distribution with a new bottle design.

Hopefully this will be a little more of a crowd-pleaser than the last couple spirits! Indeed, it's quite versatile and tasty -- I imagine someone out there has a special drink recipe or two involving Drambuie. (Fun fact: the term "Drambuie Strength" likely originates from the difficulty of re-opening a bottle of Drambuie, due to the honey and other ingredients collecting and hardening around the cap.)

Use this thread to talk about Drambuie, your favorite midwinter drinks, meal and cigar pairings, or anything else! Then take a moment to browse our past Spirits of the Month, archived here on the B&B Wiki!

I used to drink this when my mum and dad used to go out on a saturday night and I was left babysitting my younger brother. This would be around 1976.

Drambuie, Meat and Potato Pie and Match Of The Day

Haven't had a drop in years

180gVinyl said:
I used to drink this when my mum and dad used to go out on a saturday night and I was left babysitting my younger brother. This would be around 1976.

Drambuie, Meat and Potato Pie and Match Of The Day

Haven't had a drop in years
Click to expand...

Honestly, I can't stand the stuff. I've had it chilled with ice, just way to sweet. But, as always, YMMV!

I know this does make me a bit of an odd one - most of those in our single malt club love it, or the Glenfiddich liqueur. (I can't stand that one, either.)

I will take the meat pies and football match, however!

More Drambuie for you!

I'm sure we can work something out between us

Did you get confused between Roberto Mancini and Henry Mancini?

Did you get confused between Roberto Mancini and Henry Mancini?

They should play Baby Elephant Walk as he comes out of the tunnel.

Drambuie is one of my favorites. It also works great in a "hot toddy".

Reminds me of my waiter days back during college -- we had a customer who'd come in and order warm Drambuie at the end of each meal. 10 seconds or so in the microwave did the trick. A great after-dinner drink, especially on a cold day.

Drambuie's not a big favorite of mine due to the extreme sweetness (give me Benedictine any day), though it does have it's uses...

Falkland Island Warmer is a cute story. This happened years ago when we had a little mama and poppa restaurant in Oakland. It was ten or eleven o'clock at night, and it was raining and colder than blazes.

Two little old ladies who looked like lavender and old lace came in and sat in the only booth we had in the place. I asked them what they would like. One said, "Young man, do you have Drambuie?" Yes, I had Drambuie. "Well, will you take one ounce of Drambuie in a glass and fill it full of hot water and twist a lemon rind on it?" "Well," I said, "that's a strange drink. But I certainly will do that."

There was no one else in the restaurant at that time, so I could take time to talk, and I was curious about that drink I'd never heard of. So I asked the ladies where they were from. I got my answer. "We're from the Falkland Islands and this is a drink we drink there in the wintertime when we are cold. We're cold now, and we need this, and we are certainly glad that you have Drambuie."

So I named the finished drink Falkland Island Warmer. And I think it is a wonderful cold-weather drink started by two old ladies in Trader Vic's bar a thousand years ago.

Good call on this one Mod! I have never tried it before (shamed....) but have thought about it for a few months ironically. I will go out and proudly grab a bottle for this month! Good pick

One of my favorites. I drink it either in Rusty Nails or straight in a snifter.
W

Interesting, I'm not sure I've ever tried this before...

A Rusty Nail; Drambuie and Scotch!! Haven't had one in years.

I'm sure we can work something out between us

Bollocks to them. Meat and potao pie? Any time! You know, this makes me want to bag a rabbit or two, mix up a proper hot water lard short crust and have well seasoned meat pie. It has been frosty cold here and that would be a nice evening meal. Followed up with a warm-ish toddy of Drambuie. I like the stuff though as others have mentioned it is quite sweet. Don't overdo it with these sweet liqueurs because they can be headaches in a bottle quite easily.

Has anyone else noticed the price of Drambuie has went sky high the last few years? It was never cheap but lately a 1 litre bottle at our local spirits store is nearly $40. The 750ml is around $34. Kansas does have high liqour taxes though.

By the by. I hate the look of the new bottle. Sorry, just the curmudgeon in me I suppose. That silly little red cap on the old style bottle sort of became a hallmark of the product. I think I will pay up for a bottle of the old before it all disappears.

Phog Allen said:
By the by. I hate the look of the new bottle. Sorry, just the curmudgeon in me I suppose. That silly little red cap on the old style bottle sort of became a hallmark of the product. I think I will pay up for a bottle of the old before it all disappears.

+1. I totally agree. The old bottle was distinctive. The new one looks like any other liquor bottle.

How did I miss this? My Cocktail of choice is a Rusty Nail. I prefer it with JW Black but the red will to too.

JPM said:
+1. I totally agree. The old bottle was distinctive. The new one looks like any other liquor bottle.
Click to expand...

I agree, although I find the new one easier to re-open. It's not without it's charm, but compared to the old... meh. Doesn't really stand out. And trying too hard to fit in.

Rusty nails, Man does that bring back memories from my youth.
You must log in or register to reply here.

Scotch bucket list: 15 bottles you need to try at least once