I had most of this information posted before, but the linked photos were to a personal album on the site, which was deleted in one of the upgrades. So, I decided I'd repost a new thread as I can't edit the old one to reinsert the new photos. Plus, some good information came out of the discussion in the old thread and I thought it would be good to include in the new one.

Ive posted before about the wonders of the baking soda and aluminum foil trick for restoring tarnished silver razors, but I thought it might be helpful to have a photo tutorial. I first read of the idea in a post by AsylumGuido in a thread long buried. In more recent threads, Len (Oldguy) and T Rick wrote more about it. This thread is an attempt to distill some of the wisdom put forth by them accompanied by some photos. The material and information isnt new, but I thought a photo tutorial might be helpful. And if not, there are some good before/after photos of my new Bulldog.


DISCLAIMER: This process work greats for restoring your tarnished silver razors. But I wouldnt recommend it for razors with more ornate and intricate designs such as the American Button Company (ABC) Empire, Floral, or Scroll design. On razors with ornate designs like these, I think it looks best to only polish the intricate design that sits higher than the rest of the razor and leave the tarnish in the recessed areas. If you are trying to achieve this look, dont use this process. It will remove tarnish everywhere the water touches, which given the nature of water, is the entire razor, including the recessed portions. But if you want to remove every last little bit of tarnish, this is the process for you.


Onto the process itself

What You Will Need:

-A silver razor that is tarnished, which you want to restore. For the process to work, it needs to be a razor plated in silver. It will not work as intended on nickel plated razors. Also, it is probably a good idea to clean up the razor as much as possible with regular dish soap and scrubbing bubbles before beginning the process.
-A watertight container big enough to hold the razor and that can withstand boiling water
-A pot or pan to boil water in
-Aluminum foil
-Baking soda
-Water 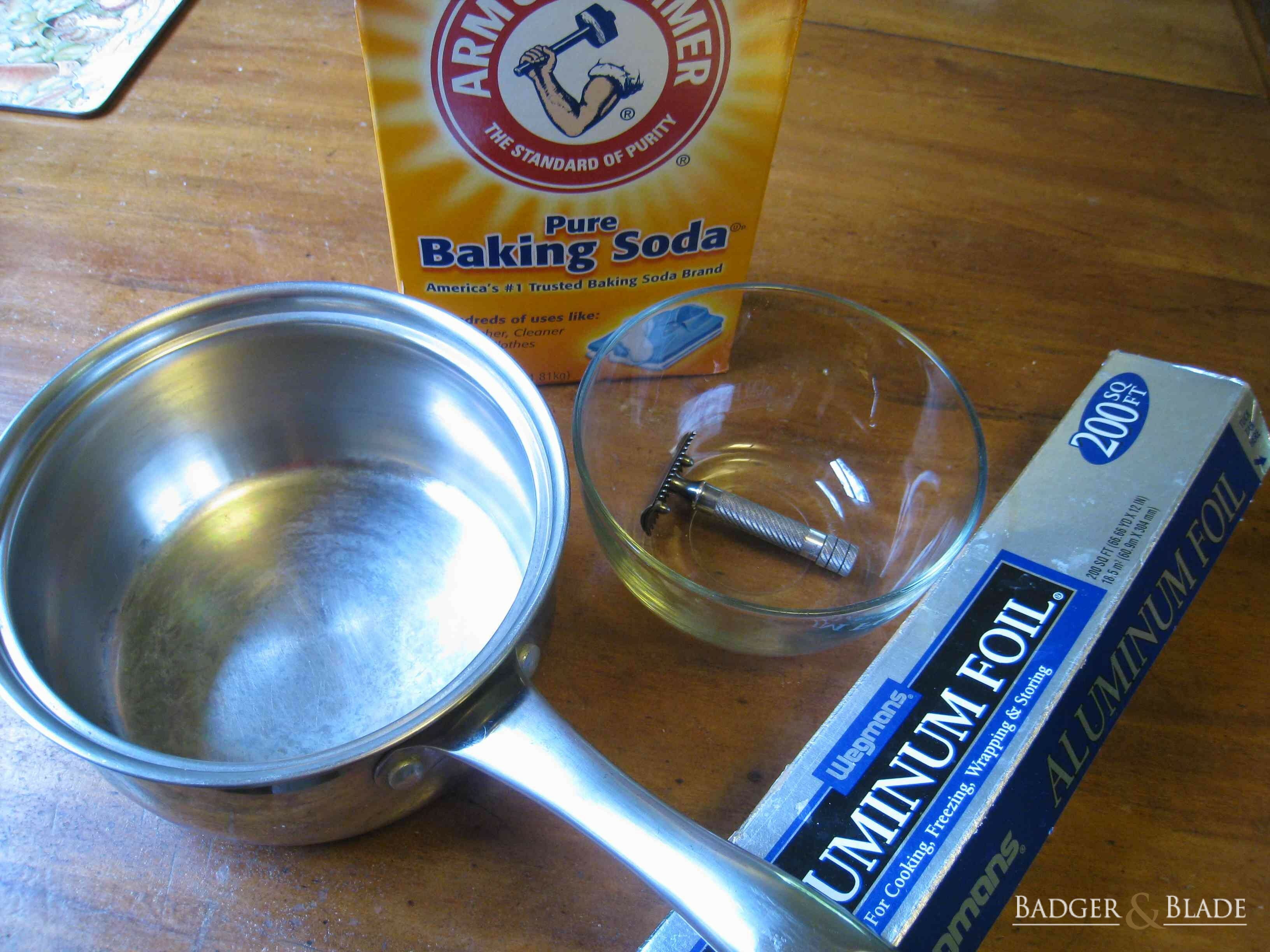 The Sample Razor:
My recently acquired Gillette Bulldog from 1916. Here are some before pictures: 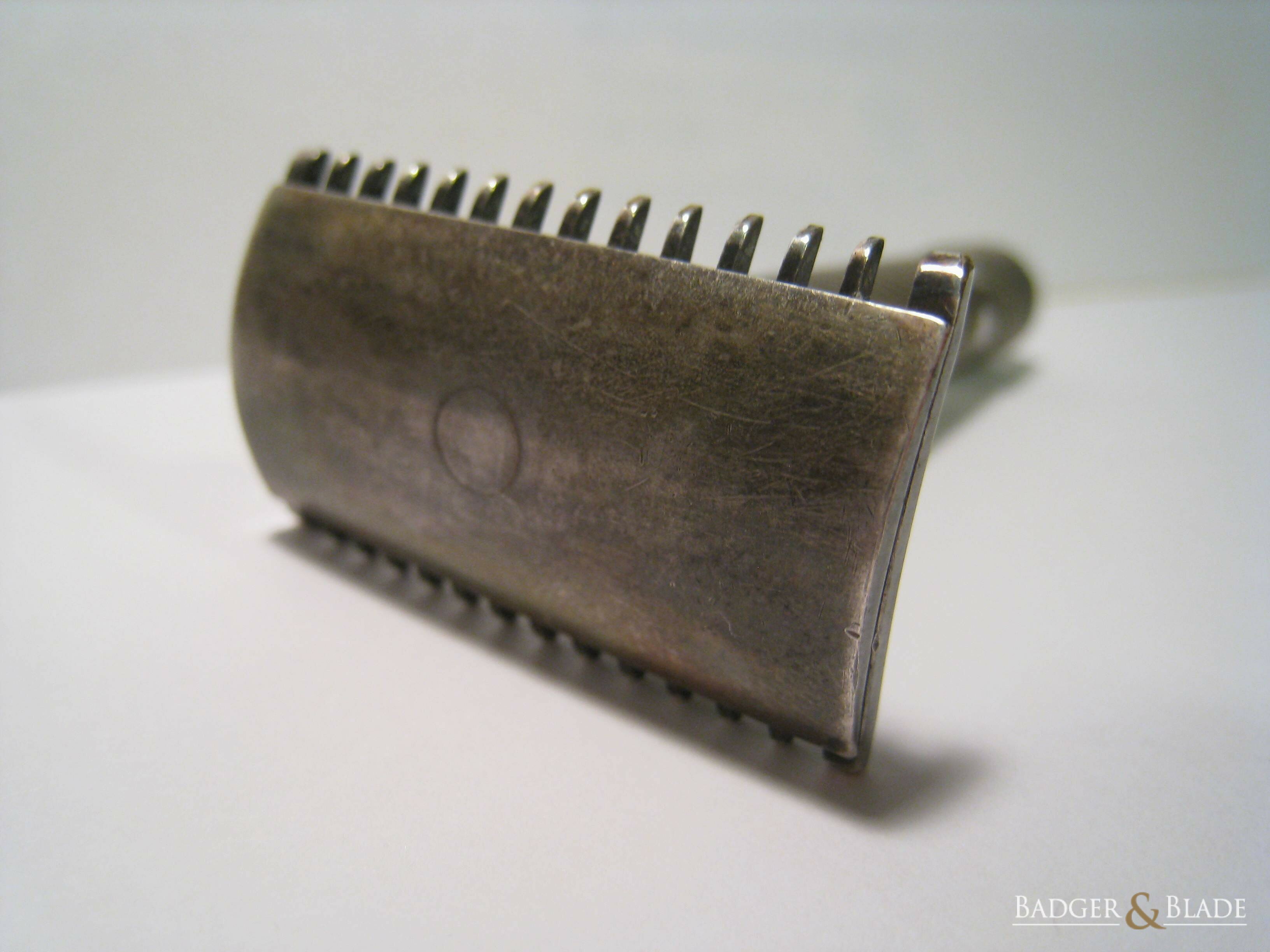 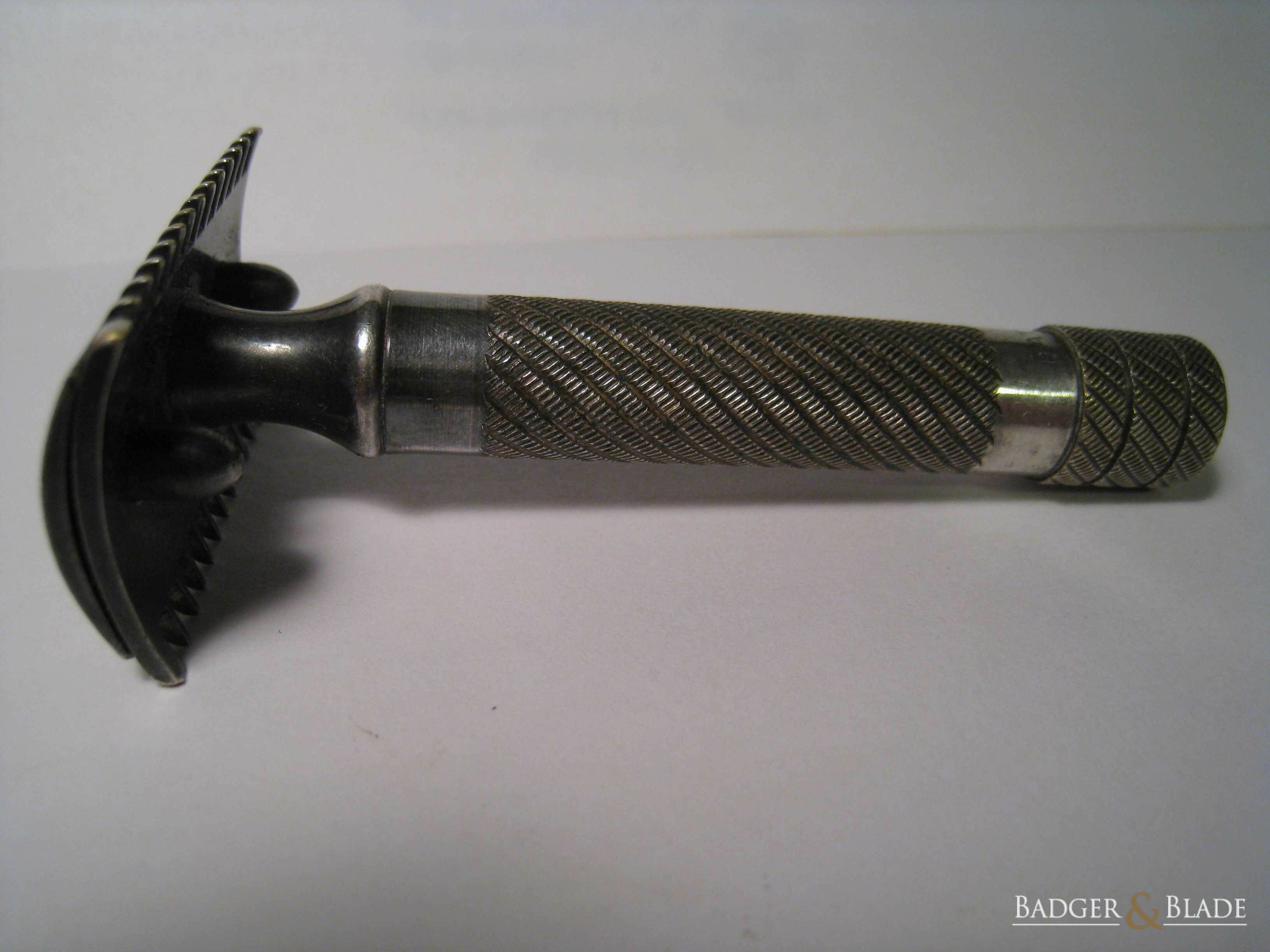 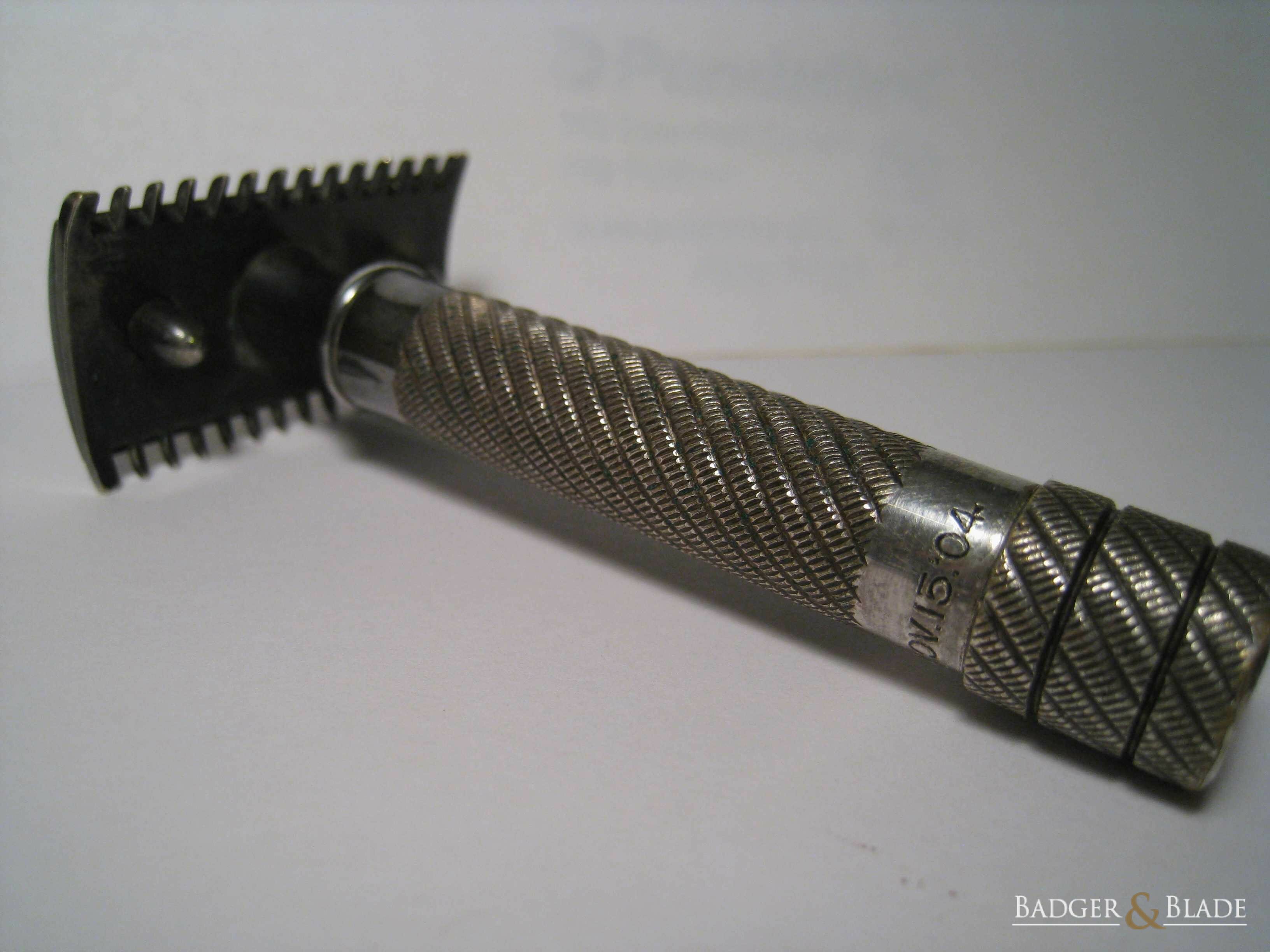 1) Begin by bringing the water to a boil.

You will add baking soda to the water later (once it starts boiling). But at this point, it is good to know the amount of water with which you are starting. The ratio is 1 cup of baking soda for every 1 gallon of water. This breaks down to a 1:16 ounce ratio or 1 tablespoon of baking soda to 1 cup of water. 2) While you are waiting for the water to boil:
(a) Line the container that you have chosen with aluminum foil

(b) Place the razor inside of the container that has now been lined with aluminum foil. 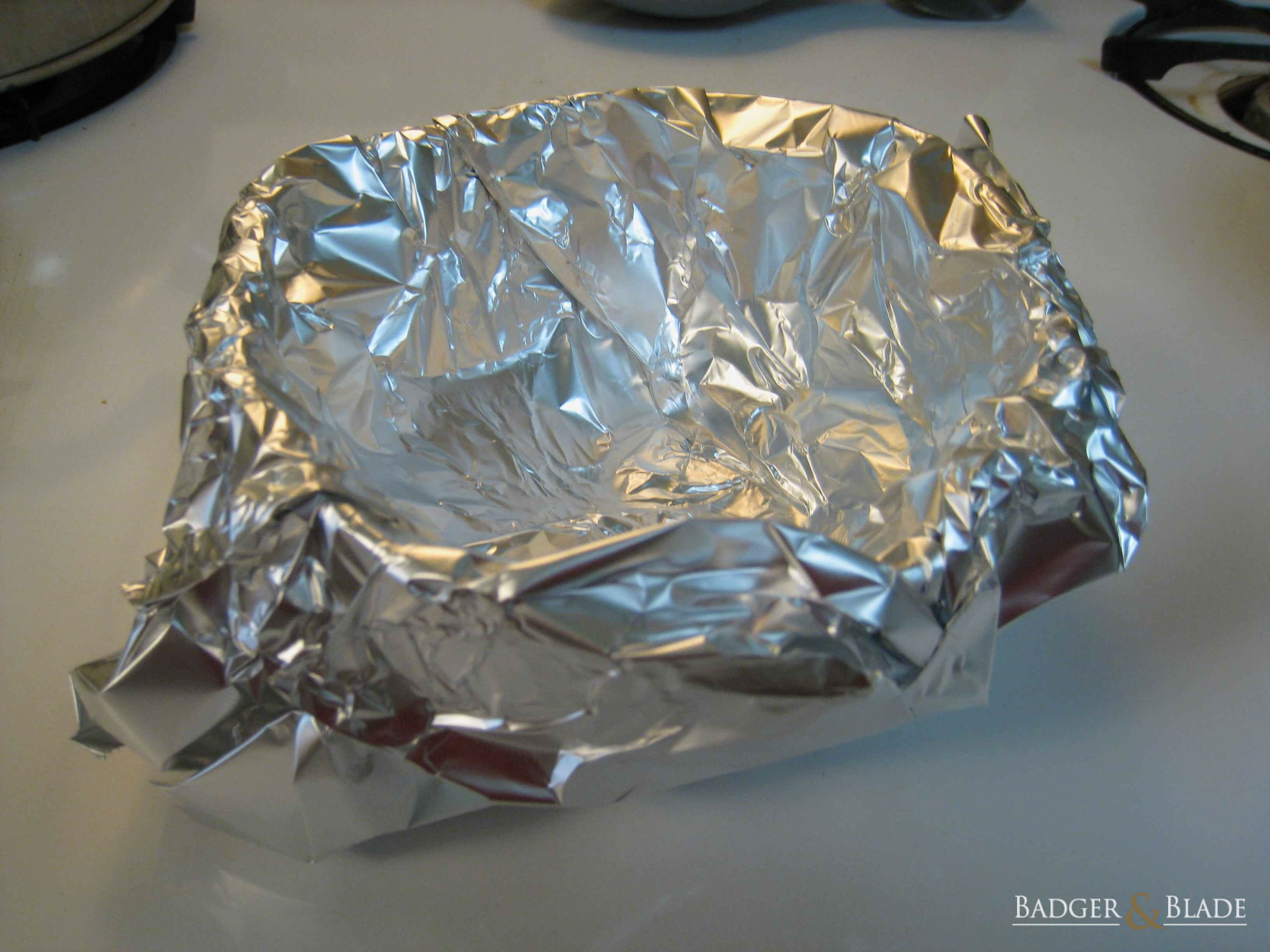 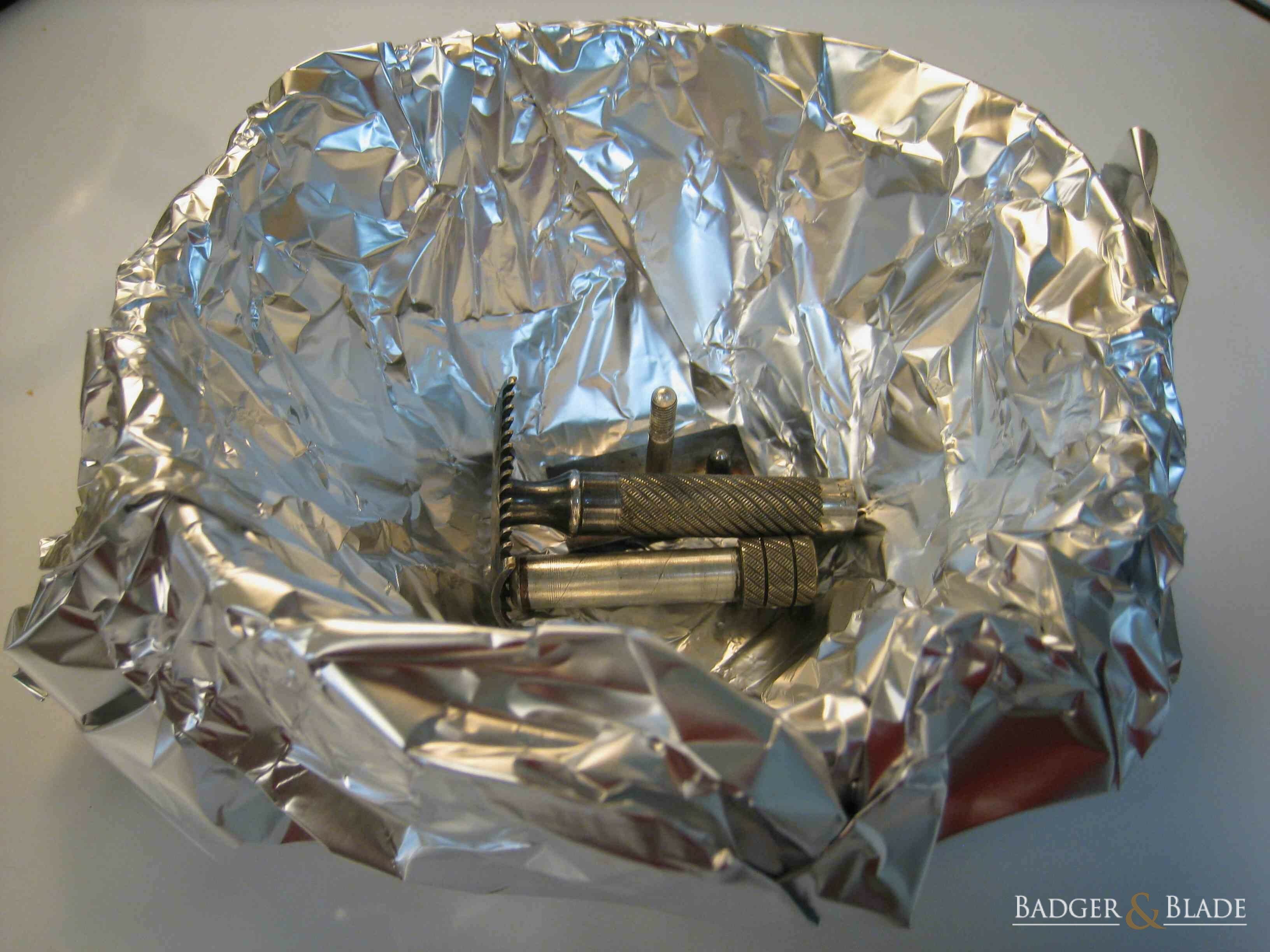 3) Once the water begins to boil, add in the baking soda. It may be best to do this over the sink in case it bubbles over, which is quite likely. If the water isnt boiling anymore, return it to the stove to get it boiling again. Ive found that the hotter the water is, the more effective it will be. 4) Pour the boiling water/baking soda mix into the container. Make sure the razor is completely covered. Let it soak until the water has cooled off a bit (About 10-15 minutes). 5) Rinse the razor and check if it needs another soak. If it does, then dump out the water that has been soaking in the aluminum foil lined container, bring the water/baking soda mix back to a boil, reline the container with aluminum foil and give it another soak. Repeat until youve achieved the desired look. Here it is after the first soak: 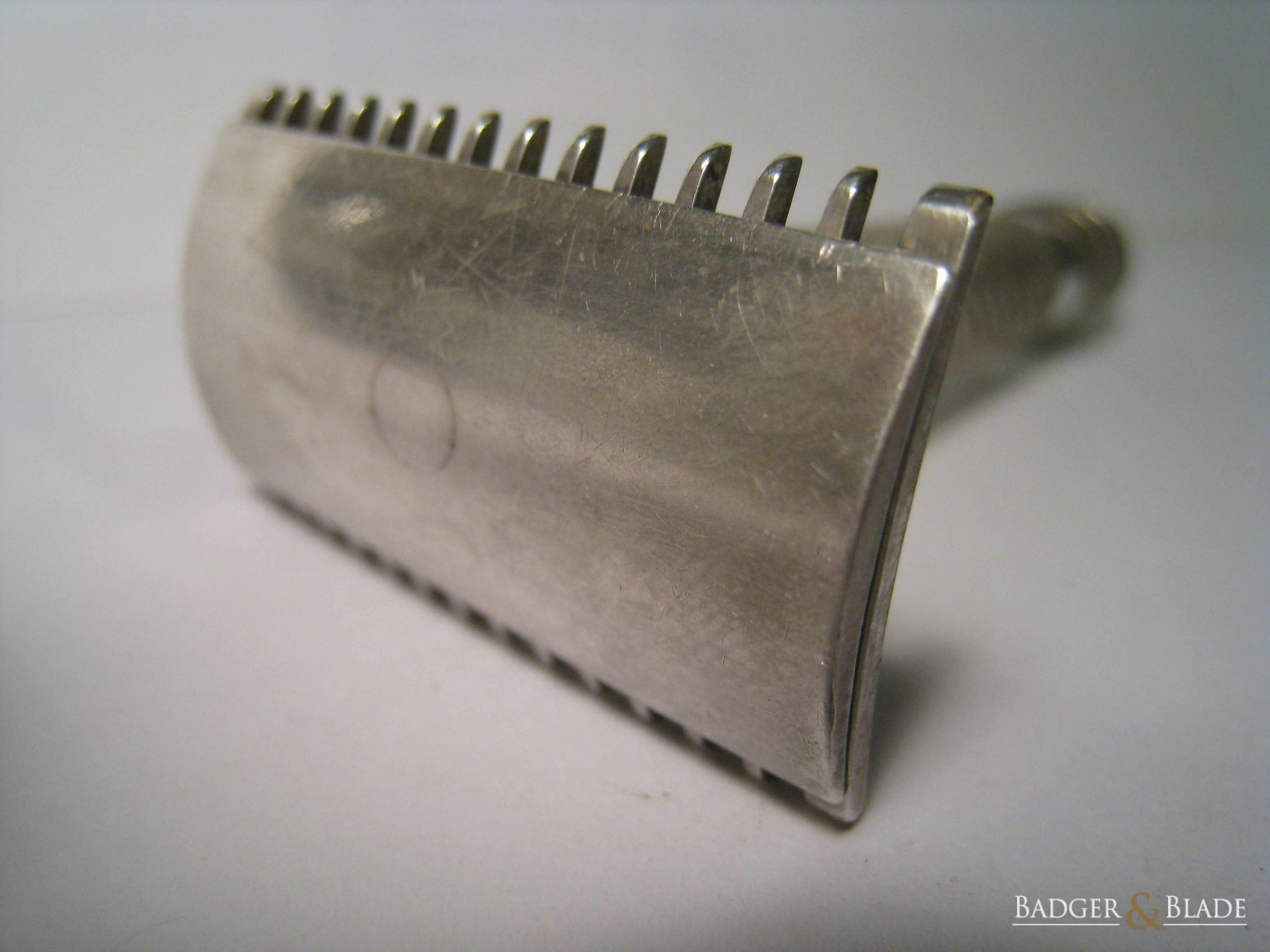 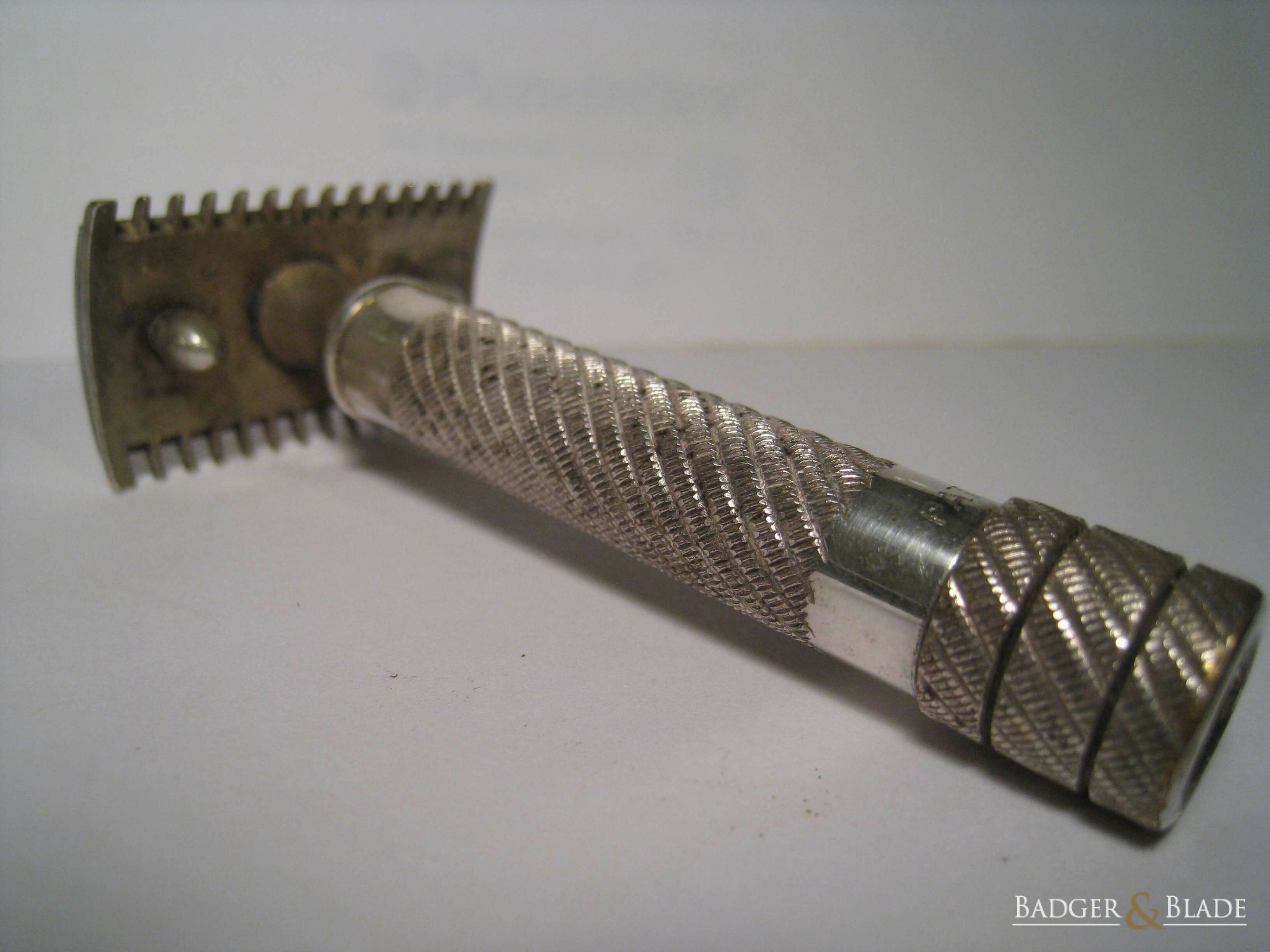 Here are some photos after four baths. This time around, there was quite a bit of residual gunk in the grooves that I didn't get out well enough before cleaning. Normally, it would be looking much better. But even still, it is about 80% of the way to the final product. Anyways, after four soakings: 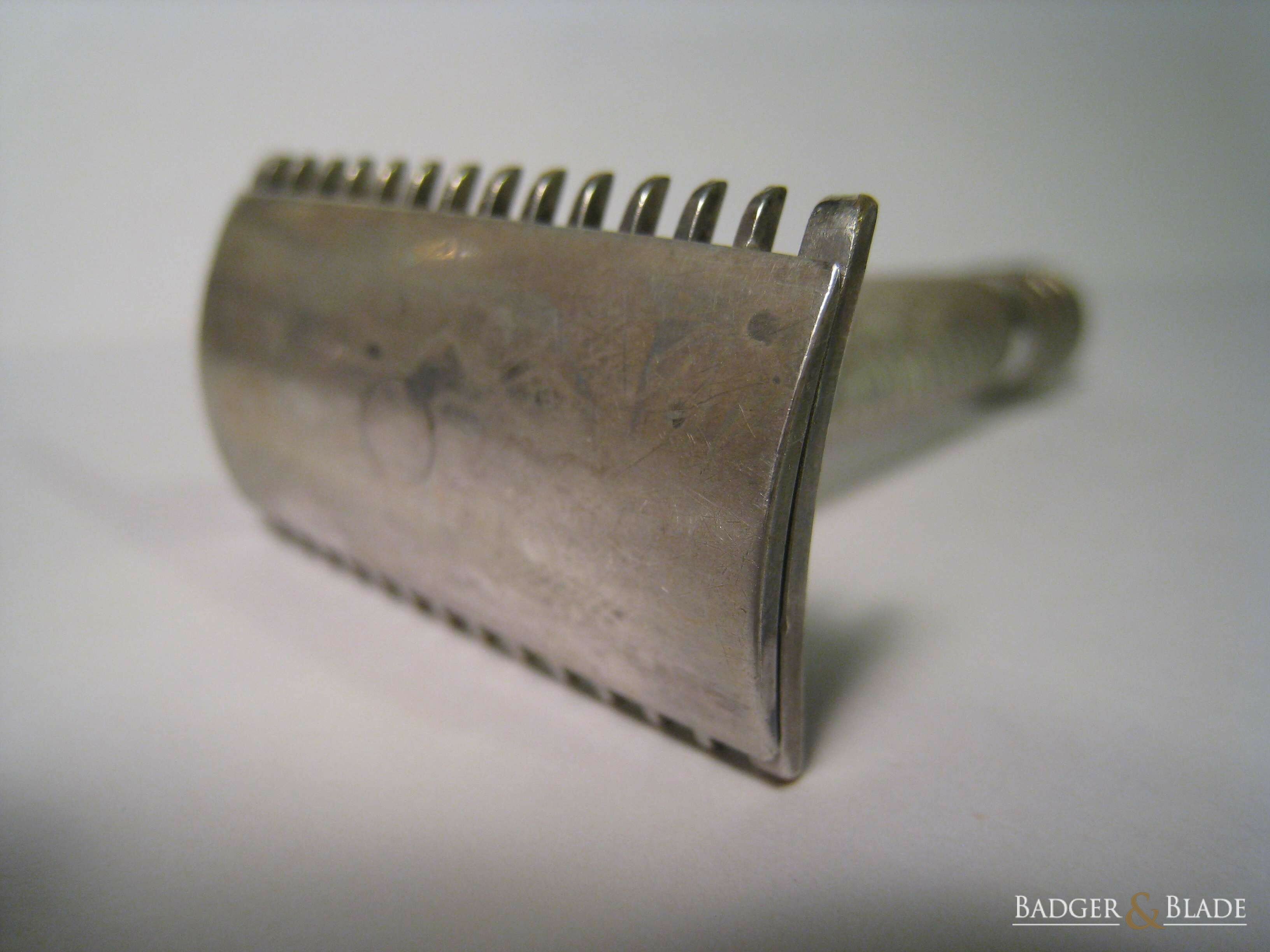 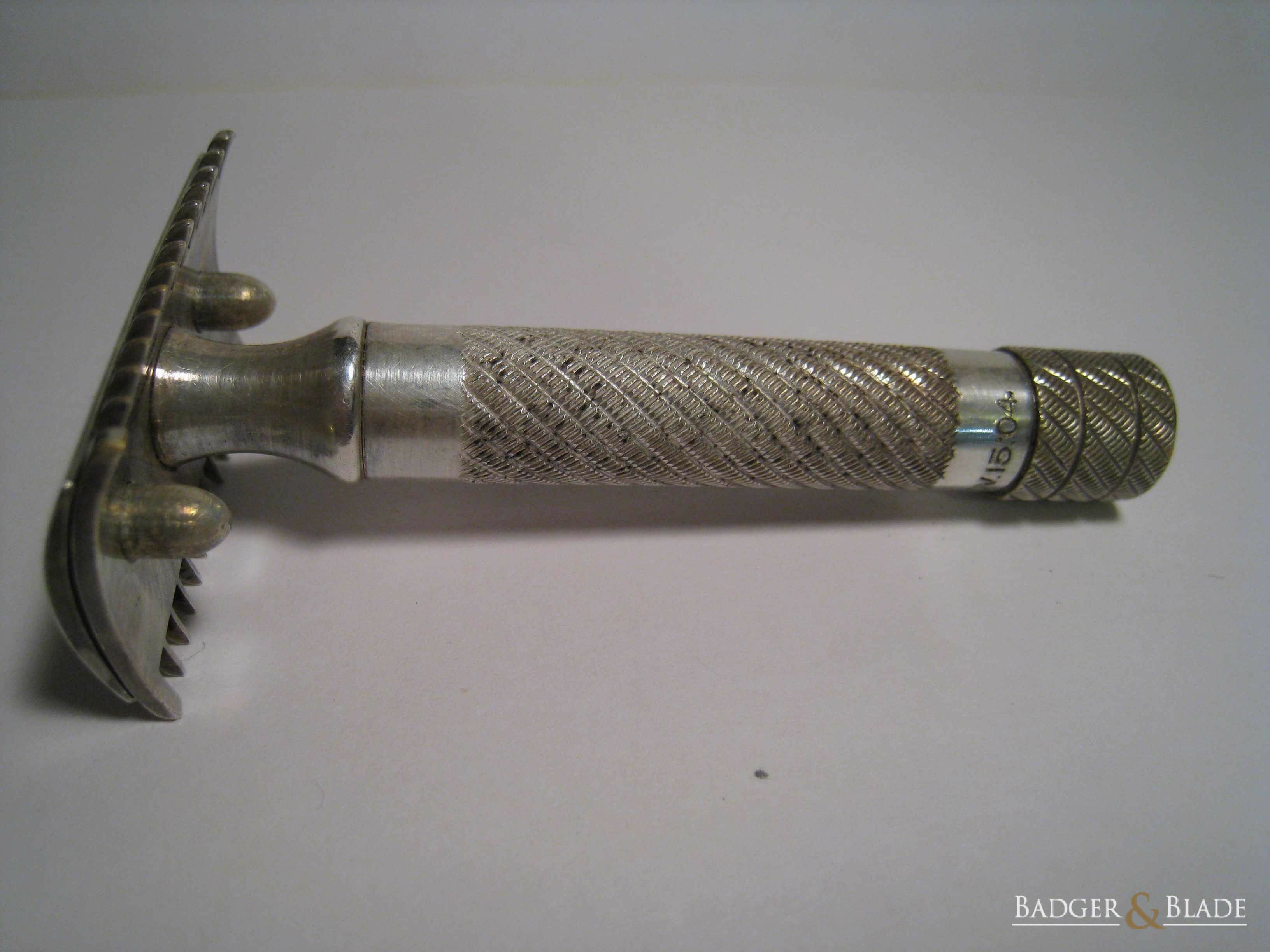 And with just a touch of Mr. Metal polish (non-abrasive), this is the final result: Then add in the boiling water. It will bubble up significantly at first, but then settle down: Following this process, here is a Tuckaway before and after two baths (it wasn't very tarnished to begin with and only took two) with a light polish like above: If there is any information that you think should be added, then let me know and I'll edit the post.

Thanks, Brian, for taking the time to document the process and share the results. Very nice razors!!

I have been using this method on silver-plated razors ever since I first read about it . . . your tutorial is outstanding and will be a big help to many!!

Thanks! I think I am going to try that on mine!
F

Nice work and nice looking razors. I also used the baking soda method of two Single Rings I picked up, it was fantastic for removing the decades of tarnish, but didn't quite get a shine, for that I had to use a small amount of polish and a silver cleaning cloth.

and the finished product

The ball-end has some brassing and a tiny crack in the handle, but it is a great shaver. The other(shown) has remnants of a tiny black spot on the cap which I don't want to work at too hard for fear of removing the silver plating. I may have the cap replated one day.
Last edited: May 1, 2010

Thanks for re-uploading this! It is the only method I use on my silver razors.

I'm glad that some of you all find it helpful. The process isn't hard, but sometimes it can be nice to have some photos to accompany the instructions. I know I was pretty nervous the first time I tried it on one of my nice silver razors.

That's an interesting way of cleaning it. But i can't help but notice this kinda looks like cooking crack. And NOOO i don't use crack, i just love the tv show COPS.
Last edited: May 3, 2010
C

I just used this trick to clean up my 1924 New Standard. Thanks for posting it here, Brian.

Here's the before and after:

Would this strategy work on my Slim and Fatboy? Thanks for the great post!
C

crugg said:
Would this strategy work on my Slim and Fatboy? Thanks for the great post!
Click to expand...

No, this is for razors plated with silver. The Gillette Adjustables are nickel plated.

Cory that razor looks great! I had a New Standard clean up just like that one using the same method. Nice work!
O

crugg said:
Would this strategy work on my Slim and Fatboy? Thanks for the great post!
Click to expand...

This process is used to convert silver sulfide back to pure silver. It's purpose is to preserve the silver plating on vintage razors or anything that is silver plated. It is not a cleaning method as such. It's actually a way to polish the silver without removing it.

What a useful thread. Thanks

Are the pre 1951 silver fat handle techs silver plated, or nickel plated?
How about the Gillette Old model?

Jaymo said:
Are the pre 1951 silver fat handle techs silver plated, or nickel plated?
How about the Gillette Old model?
Click to expand...

As far as I know, all the Fat Handle Techs are nickel plated. And the the various old types (pocket edition, single/double ring, bulldog, big fellow, etc) Gillettes are silver plated, but I seem to recall that Achim posted something about a nickel plated Old Type in a Service Set.
Last edited: May 9, 2010
O

BrianDiPalma said:
As far as I know, all the Fat Handle Techs are nickel plated. And the the various old types (pocket edition, single/double ring, bulldog, big fellow, etc) Gillettes are silver plated, but I seem to recall that Achim posted something about a nickel plated Old Type in a Service Set.
Click to expand...

If you can look closely at the photo of the Service Set on Mr-razors site, the Gillette ad in the corner says the case and razor are nickel plated. I have two of these service sets and they appear to be nickel.

Thank You! For a very helpful tutorial
A