Jurassic Park, Or, Who Has Got The Oldest Razor Collection By Combined Age Of Items?

Good stuff! We are now in the Chalcolithic Age or the Copper Age. We have gone back about 7,000 years. Otzi the Iceman is wandering about and they are probably thinking about Stonehenge I.

Actually, from a couple of recent posts, we are nearly at 9,000 years. So, good news colleagues. The Near East is witnessing the Epipalaeolithic which turns into the Neolithic Age, seeing the first agriculture across the Fertile Crescent.

However, Europe is still stuck in the Paleolithic Age. Do try to keep up Europe! What are now the islands of the United Kingdom are still physically attached to the European continent. The English Channel, North Sea or Brexit are not yet a thing.

The invention of pottery is reported from China and Mali, and lentils, millet and primitive wheats are all popping up. Bread and beer is almost here.

Cheery news is also coming in from the United States. The Clovis Culture is doing well, apparently.
Last edited: May 19, 2022

I wonder if anyone here has a really old razor - I mean something from several thousand years ago. I think the oldest razors found so far are about 20,000 years old and made of stone, but there are copper and gold razors from ancient Egypt that are still 6,000 years old. it would be nice if this thread was won by somebody with only one or two razors.

I have absolutely no chance in this crowd!

Is it too late to say “pics or it didn’t happen”?

The combined ages of all B&B members' collections would take us back to the age of the Dino's I think.

B&B membership has its percs

Ok, since this has some "legs" I pulled up just the SE's - GEM style (including Kampfe, Star, Henckel's etc) and the Schicks (including a couple PAL). Didn't look at DE's or my small collection of straights, half of which were made in the last 20 years. I had to assign some mfg dates based on the midpoint of the production run (for example, a Schick C Type repeater was made from 1933 to 1941, so I gave it an age of 85) ..

Updated list, based on a detailed report from garyg

OK, just for fun, I made a rough count, including some recent vintage acquisitions.

Since the flood back in 2016 I have not reorganized my razors other projects keep coming up. I think I have 20 that are at least 100 years old. This weekend might do a quick count just for the hell of it. 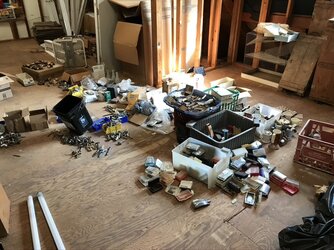 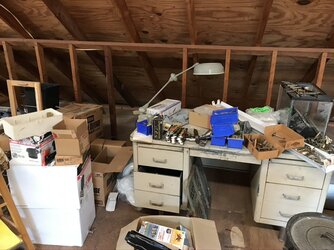 Bobbers said:
Since the flood back in 2016 I have not reorganized my razors other projects keep coming up. I think I have 20 that are at least 100 years old. This weekend might do a quick count just for the hell of it.
View attachment 1458708View attachment 1458709
Click to expand...

I think you alone put us back into the last ice age.
O

This is indeed a fun one. I have a very modest vintage collection, just starting, but I'll put mine in -

Agreed a fun thread. I too prefer vintage razors as there is something about taking a tool well over 100 years old, cleaning it, honing it, and having it give a better shave than pretty much all of what is for sale at Walgreens.

Let’s see… I have a four Sheffields I would date to the 1850s to 1860s. All are pre McKinley tarrif act. We will say 600 years there, as I think my Bengal is more from the 1880s. Then there are my American razors. I have 3 of them that I would date to be at least 100 years old, so 300. Then I have a couple of German razors and a couple of Swedish johan engstroms. The Engstroms have to be over 100 years old as Johan died and the company was purchased by SSA in 1918. The Germans could theoretically be mid 20th century. I have a crown and sword that looks later production (awesome razor though). I also have an OT ball end, a tech, and a super speed. I say 1300 years is a pretty conservative estimate. I think I’m missing a couple of three razors too. Oh and I have a stub tail straight scale “Temper” on the way that will add 200 years by itself. When I get it in hand I think 1500 will be a fairly accurate (but still somewhat conservative) estimate. So I’m in for 1500 I think.

I have 3 razors that are from Roman times, say 3 x 2000 each. And I don't actually know how many vintage DE + SE razors I have but I would think in excess of 300 now. Possibly more. I guess most of them are approx 100 -110 years old as my collection is heavily slanted towards double rings, single rings and the earlier gillettes.

That's a lot of years already if added up consecutively.

But I know that there are many on here with older and larger collections than mine.

I have about 45 vintage razors that add up to around a total 3,000yrs.

I ordered a new Claymore Evolution head... so I'm up to 4 years now.. if you let me count a year for each razor... if they were made within the last 6 months then I'm only up to 2.

I think I made the very bottom of another list again.... I'm going for a B&B record. <eg>
You must log in or register to reply here.