Greetings colleagues. I do hope our friends from the United States are enjoying a pleasant Thanksgiving Day!

Recently I received a wonderful PIF from @nemo, a 1948-9 Superspeed in superb condition. I only had to pay a modest shipping fee to the UK.

I have long been fascinated by the classic Gillette TTO models, which to me mark the 'golden age' of U.S razor design, and almost emblematic of DE shaving, especially in film and classic TV advertising of the 50's and 60's. I was asking around the site wondering if there was an affordable and efficient clone or copy made today, when nemo very kindly reached out. As a result I was able to experience at first hand this classic.

I'm aware that many members own a Superspeed or variant. I just thought it might be interesting to discuss using one from the perspective of a relatively new DE shaver, and one who had never actually seen or handled any of the 40-60's Gillette TTO razors before. Familiarity can, inevitably over time somewhat diminish the magic of owning and using something special. I may well be wrong on that, but I just thought that a post describing handling and using one of these masterpieces of design and wonderful fusion of incredible build quality in mass production might be amusing. 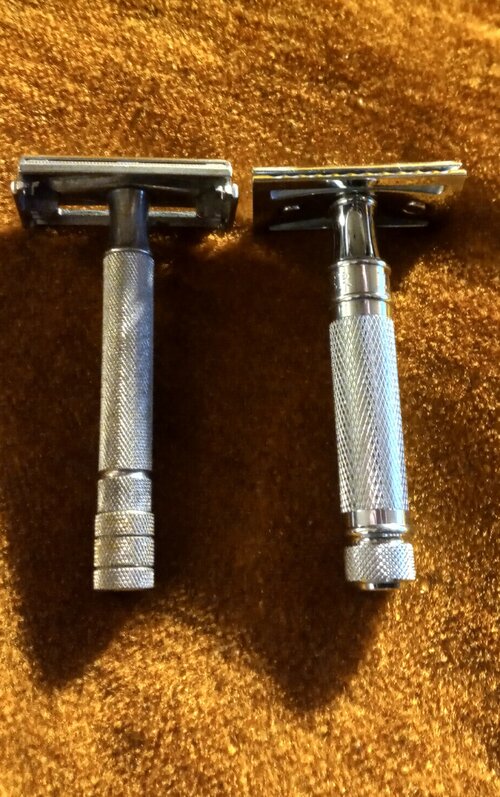 My first surprise was how delicate and ergonomic it is. The EJ89 'Short' is both heavier and feels more 'clumsy' than the Superspeed.
Don't get me wrong, I do love the feel of the 89, with it's excellent head geometry, but the Superspeed looks and feels more modern.
Obviously my 72-3 year old S/S is not chrome-shiny like my Kelvin (according to the inspection label, it left EJ's in Oct 2020, and I do believe I bought the very last one on Amazon) but this S/S left the factory in Boston MA in a lovely subdued nickel finish, and apart from the smallest wear on the handle where the brass is visible in one point the finish is still 95% factory fresh.

I was also surprised at the delicacy of the handle. It is Pencil-thin, with a lovely subdued but efficient knurling pattern. In contrast the EJ handle is somewhat heavy and almost clumsy by comparison. The S/S balance point is wonderful, precisely at the handle neck where the knurling begins. The handle length of the S/S is just over 80mm, where the EJ's Kelvin handle is 76mm. Oddly though, visually the S/S handle 'looks' somewhat longer. Odd.

The EJ89 comes in at 60gms, which is considered a somewhat light razor. Well imagine my surprise when I weighed the S/S. 54gms! I did think 'old' technology had to be bigger, heavier, more clumsy..nope, this was turning my expectations round on their head. The head is a engineering bloody masterpiece. The knurled bottom cap takes just over two turns to open the doors. A saw a modern TTO reviewed on YouTube that took six turns to open! I forget the brand (mercifully). Everything locks up lovely and tight, and opens evenly and sweetly. the butterfly doors oddly reminded me of a B-47 StratoJet's quick-acting bomb bay doors that I saw on a Aviation documentary a couple of weeks back. Sorry, but I am a tragic Aviation nerd. Funny, but they were test flying the B-47 over California the same year my S/S was made. I do like to think it is a 1948.

Enough Talk! Do The Shave 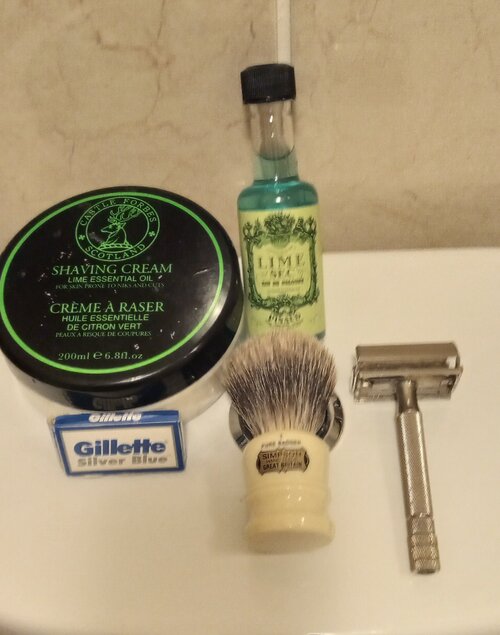 Well, for my new best friend I thought I would get out all (and my only, for now) 'classy' stuff. The Castle Forbes Lime shaving cream, Simpson's No.1 badger, and a rather pleasant lime Sec cologne, which complements the Castle Forbes nicely. (The mother of all hat tips to @Cal for the software!)

With the SuperSpeed, nemo had very kindly added some Gillette S/B and a Spoiler. However, I decided to hoard them (for now) and instead broke out another item I had not used before, an Israeli Red. I took it out of it's waxed paper, and instantly realised that top-tier blades also look the part. This looked steely and competent. My first sharp high end blade. I was certainly going to town today.

So I loaded up the SuperSpeed, (I love that centre bar, with the little notches. To grab the blade straight from the dispenser pack. The first razor 'system' I suppose. Real Jet-age stuff!) Cool. The doors twisted shut in perfect alignment. The blade exposure and alignment was perfect. The feeling of build quality and sheer sense of design perfection coming from that 54gm piece of nickel coated brass was beautiful.

As was the first caresses of the Simpson's brush as I lathered up for pass number one, after a thorough face wash and beard hydration. I had about a two and a half day growth. First pass NS, just mowed everything down basically. The Superspeed is not a 'mild razor'. Instead it inhabits some razor sweet-spot, where shave results depends entirely on the efficiency of the blade and the technique of the user. The I/P showed me a new level of blade sharpness and it's very smooth, I thought. I was about 90% done.

2nd Pass XTG, again, highly efficient blade married with an amazingly ergonomic razor with awesome handleability. The head I found to be very easy to use under the nose, and in the upper lip area.

An amazing shave with some amazing gear. A whole new experience. My deepest thanks to all who made it possible, and to all on B&B. An honour to be among you all.

Contributor
Me later tonight(tomorrow morning for you)

Contributor
The one thing I am wondering about with these vintage razors is what width of the sweet spot? In other words, where is the sweet spot between riding the the head and riding guard. I reluctantly admit that many vintage razors, with modern blades, work best steep. Thanks for evening read!

APBinNCA said:
The one thing I am wondering about with these vintage razors is what width of the sweet spot? In other words, where is the sweet spot between riding the the head and riding guard. I reluctantly admit that many vintage razors, with modern blades, work best steep. Thanks for evening read!
Click to expand...

This was a new shave in many ways for me. I took Cals advice and rode the guard as much as my nerves allowed. New, much more efficient blade for me, new head (or old head but new to user) all seemed to help the shave. I got to pesky areas I've never been able to efficiently clear before. (A weird area just under chin, and a couple of spots under jawline)

It's a very nice razor head, the angle I guess is the same as the regular out of the Colour Tip range that came just after. The basic head is the baseline design for the 195 adjustable?

Unsure if a steeper angle was used in previous decades. The razor head felt comfortable there, unfortunately I'm still very unreliable in consistency of technique, and am still a little blade shy.

Alum (love your nick and avatar),

Welcome aboard. I too have an SS, a '53. For some reason I don't shave with it often; that tiny handle seems less like a "real" razor than the sturdy grip on my Red Tip and the thick handle on my Fatip. But whenever I do bring it out, it shaves superbly. I too usually run a Personna "Israeli" Red in it, though I have tried a Derby (not so good) and Gillette Silver Blues (great blades, but I don't buy anything new from Gillette).

The first vintage razor I bought was a Gillette ‘Red Tip’ Super Speed (1959 E-1). I use it a lot and it gives me wonderfully comfortable but effective shaves. It is a real antidote to the high efficiency modern razors that I usually use, and I love the way it makes my skin feel. I do find it quite angle-sensitive, but if I prepare my face and lather well it gives me a nice, close shave. One of the razors I most enjoy using.

I only have a pic together with my US Aristocrat and Adjustable ‘Fatboy’, but here it is, in the centre… 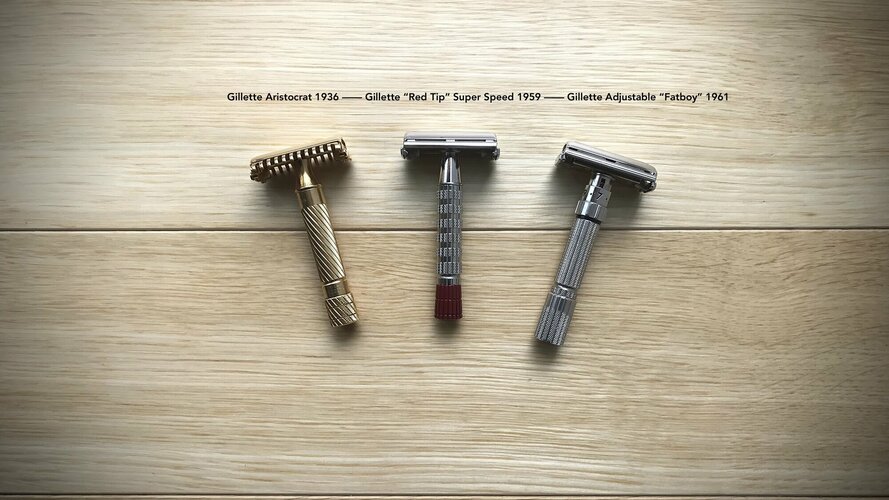 Parker 87R. Worth Getting As An Affordable Tribute To Gillette Aristocrats Or Superspeeds?
2

My First Time Making And Using A Shim. WOW.
2

A Chaotic 1st Shave With A 40's English Tech