Of late, I've seen "Soap of the Gods" soaps in sparse SOTD pics, and I was of course, intrigued. Coincidentally, I happened upon a couple positive reviews of "Van Yulay" by two of my favorite reviewers, Michael Freedberg and Michael Ham (aka Leisureguy). At which point, I discovered Van Yulay is a skin care company with "Soap of the Gods" being their shaving soap line.

Van Yulay's website, specifically the shaving soap section, can be a bit overwhelming in that it has 2 pages of various soaps. I counted 81 different between the 2 pages. The default sorting is alphabetical, but unfortunately, a few of the titles begin with the unique name of the scent, while others begin with "Shaving Soap of the Gods" before indicating the scent name. This lends to a bit of a scattered presentation with thumbnails that are about twice as large as they need to be. The sorting options are the standard for any catalog site. If the proprietor ever sees this, I have just a few suggestions that would make the process a bit more appealing, most of which have to do with the webmaster in particular:

First, it would be nice to stipulate that these are all "Soap of the Gods" soaps, and omit that from the title of the product purchase link. It's their brand, so Im by no means suggesting they remove it from the product label or even the details page. If the omission of the phrase is a deal-breaker, then they should correct the three outliers on page one to maintain uniformity and allow for a true alphabetical listing. Additionally, a few other sort options would be nice. Since their extensive lineup consists of tallow, vegan and/or clay, I would love to be able to sort them in that fashion to narrow down my browsing. I would even be willing to accept a compromise by just segregating the vegans to a page of their own. The search function works quite well, however. Also, it would look a little less crowded if the thumbnails were either smaller, or better yet, formatted such that the entire round label is visible. The "quick view" pop-up link works well, but again, the whole label is not visible because it's cropped.

Van Vulay does not offer an alcohol splash, but rather a balm and a splash that is water-based. The after shave products contain good skin care ingredients like aloe and witch hazel among a number of other goodies that I recommend you discover on their site. Each of these can be customized to match the fragrance of their various soaps. As a nice touch, menthol can be added for $1 more ($0.25 for the balm).

The products arrived in a box just large enough to hold the single tub and splash that were individually wrapped in bubble-wrap. They were packed tightly and securely. There was no additional security tape around the individual lids and the splash's bottle did not have a security seal.

While the art choice for Puros La Habana is good, the execution is lacking a bit. The labels seem to be water resistant, but the ink easily flakes off with a finger nail. Despite that, there were only a couple faint scratches on the labels until I attempted to work out a bubble with my thumbnail. The images on the front of the tub and the bottle were crisp but with crushed blacks making it appear to have been printed with a lower quality inkjet printer. The ingredients list on the bottom of the tub is so blurry, it's almost illegible.

The splash is a milky base with an amber substance that I assume is the fragrance oil separated at the bottom of the bottle. With a bit of vigorous shaking, it becomes homogeneous again, but it separates within minutes, so if you're not already in the habit of shaking the splash just prior to application, you'll want to be conscious of this with Van Yulay's splashes.

The soap looks quite interesting in the tub. There are 4 star-shaped molds that have fused together. They appear to have been squirted directly into the tub with something like a pastry bag. The individual molds can be separated and removed in case you want to share your soap as a sample or even if you would prefer to press one into a separate bowl for lathering/loading. I've never seen this presentation before, but I can certainly appreciate its benefits.

As my first soap from Van Yulay, Puros La Habana caught my attention because of the description: "Rich tobacco cigar notes and spices of Cuba". The singular description was appealing to me because singular cured tobacco notes are somewhat hard to come by in the wet shaving word. At least I think I would like to try a soap that smells only like a fresh, unlit, Cohiba. However, in my experience, cured tobacco scented soaps end up containing the tobacco notes, but they're accompanied by other sweeter fragrances. In my mind they typically end up smelling like a man who would smoke a Cuban cigar as opposed to smelling like the cigar itself. I do understand that my romantic idea of a soap that smells singularly like a cigar would probably not be appealing to most people. Puros La Habana falls in line with my prior experiences. In fact, off the puck, I was quite disappointed to note a complete absence of tobacco notes. It actually smelled like the almond-scented mini bar soaps found in hotel rooms. It was pleasant, but hardly what I'd expected. However, being quite aware that the dry scent is often vastly different from the lathered scent, I was still hopeful.

Fortunately, the scent became more true to form once I lathered it. I immediately picked up on a light powdery scent that evolved to bold warm spices, elements of which were suggestive of cinnamon, clove, and black pepper. Cured tobacco didn't really emerge until the end of the first pass, but then it resonated and ultimately dominated the profile with elegant powdery notes and intermittent leather undertones.

I'll be honest. I chose my vintage Kent V8 for this shave for a very flaky reason: The color of the handle looks great alongside the color scheme of the VY products, so I thought it would make a nice SOTD pic. Fortunately, the vintage badger knot of the Kent is exceptional, so I didn't sacrifice anything. The Kent tends to hold more water than my other two badgers (TGN finest, and an unknown source HMW from BSB.). Given this particular soap contains clay, I let the Kent do its thing and started with a relatively damp, but not dripping, brush. I loaded directly in the tub and was blown away by the immediate creamy protolather. With my hard water, I got a beautiful dense and creamy face lather within a few seconds. The lather was reminiscent of Stirling's discontinued clay formula, but it would have taken a good 2 minutes to achieve this level of lather with Stirling. I mention Stirling because until now, they were really the only soap makers that could pull off a clay soap with my water. For me, it was worth the extra effort I had to put into Stirling's old finicky formula. (I should note, Stirling has re-formulated and eliminated almost all of their clay bases, and I do love their new formula.) Van Yulay managed to get the right ratio with this base. Another aspect to this soap is the water range. Clay seems to get slicker with more water, but if that clay is accompanied by tallow, you run the risk of breaking down the lather if you're overzealous. This particular formula doesn't contain tallow. While I'm certainly a fan of tallow, I feel this formula is not missing anything by omitting it. I'm no expert, but I suspect this is what provides the exceptional range without sacrificing density. As I've stated before, I tend to like my final pass on my head to have a relatively thin, but slick lather. I can easily achieve this with this VY formula while still maintaining a thick, dense shiny lather for my face and neck. I experienced zero irritation despite starting with 5 days of growth. That alone is a testament to the impressive performance of this soap.

I used the splash more as a fragrance, since the post-shave was sufficient to go without it. There's nothing particularly special about the splash other than the usual soothing effects of aloe and witch hazel, but the fragrance is the reason to use it. It simply picks up where the soap left off and has lingering warm spicy tobacco notes with faint and clean powdery undertones. It's truly an elegant scent.

This is my first impression and shouldn't be taken as a full review. I recommend you check out Michael Freedberg's and Michael Ham's reviews for more insight, but I am for certain sold on Van Yulay's soaps thus far. I am off to order more of their offerings as we speak. Happy shaving!

Very nice writeup! Van Yulay makes some great products, scents are subjective, but I found this one to smell exactly like Gingers Garden Havana Cognac, and Soap Smooth Cognac. All are nice scents but smell the same to me. I like that they have several Tobacco scents to choose from, much more than most artisans. Great performance from the soap IMO.

Ambassador
Very detailed info there; thanks.

Nice, thorough review.
After receiving notice of a great deal they have right now, I decided to research them first which led me to this review. 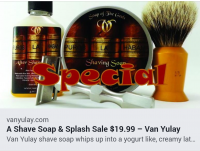 Great through write up. Thanks .


Pottertons said:
Nice, thorough review.
After receiving notice of a great deal they have right now, I decided to research them first which led me to this review.