Contributor
My wife’s birthday was on 27 April so I graciously decided to fly us to Phoenix for Big Shave Southwest. I will caveat this review by saying the only other convention/conference/gathering I attend is the National Safety Council (NSC) yearly Expo/Congress… featuring 1,400 vendors. Big Shave Southwest was more… intimate. Maybe 25 vendors or so.

We flew in, from Albuquerque, Thursday morning and got to the Crown Plaza around 10:00. They were very nice and went ahead and gave us our room. We took a nap and awoke in time to travel a few miles to the Hand & Stone Massage and Facial Spa where we enjoyed an outstanding massage (have to prepare mind and body for the Big Shave event). That evening we visited a nearby mall (featuring an Art of Shaving store) and dined at The Cheesecake Factory.

The next morning we met Douglas Smythe who was setting up his wares. No doubt I have heard some passionate comments about the man so I did want to meet him. He seemed to be neither a sinner nor a Saint. He was gracious and a bit of a showman (I would think you have to have some flair to keep the event energized). Anyway… on this date and at this time he seemed nice and welcoming.

We spent the rest of Friday visiting with a couple of Classmates (1st grade through High School) in Paradise Valley and over in Glendale. While in Glendale I also stumbled upon my Doppelganger at the locale Cabala’s. Then we returned to Chandler for a good night’s sleep prior to the Big Event.

Saturday morning by a quarter to 10 a crowd was gathering. Everyone was in good spirits and we talked to one fellow who had driven in from Nebraska just for the event. The event staff appeared to have many upbeat volunteers who set a nice tone prior to the door opening. The doors opened promptly at 10:02, by my watch, and it was game on.

The vendors were well stocked and very nice. The biggest, and best supplied, tables seemed to be from PAA and the Razor Emporium. That was no surprise since they are from the area. However the other tables were full of gear and there were plenty of shave soap and shave brush artisans. I spent quite a while just smelling shave soap after shave soap. I was slightly disappointed to find primarily 24-26mm brushes. I was hoping for more 20-20mm… but so I it goes.

The prices were nothing to write home about… you could probably pick up most of the items for the same price off the internet. However, you did get a chance to hold an item in your hand and do some real-time comparisons. The Swag bag was about right. It did not disappoint but also allowed my socks to remain on my feet.

I have come to embrace wet shaving a bit later in life (6 months ago). My disposable income is greater than in my youth and I have been able to (and indeed have) purchased what I want … when I want it. As such I already have almost everything I want in regard to wet shaving. But it is still nice to have a venue to see most of what’s out there.

To me the highlight of the event was the people. Fellow shaving enthusiasts (some with family in tow who appeared less enthusiastic but were probably being bribed via a follow-on trip to an amusement park/ice cream shop/mall). Also all of the vendors were upbeat and personable. The entire event had a nice small community family feel to it.

I only bought a couple of soaps at the event but did end up buying the “Bourbon “ shave cream and balm from Art of Shaving at the mall. I am not the biggest fan of Art of Shaving but my wife liked it… and, after all, it was her birthday.

The event, vendors, and products available were all nice. The highlight was meeting the people. If you have never been to Big Shave, or a similar wet shaving gathering, should you go… yes. Would I go again… if I had old friends in the area and a great spa nearby… yes.

Terrific recap of the event! Thanks for sharing and glad you had a nice time!

Thanks for your detailed review, Leonard!

Contributor
Ambassador
I probably walked by you a few times without even knowing! I enjoyed the event. As you said, a big part of it is the overarching spirit of the community. Everyone was friendly, vendors and attendees alike. I, too, talked with Doug and he was absolutely courteous and every bit the Douglas one sees on YouTube and in I'd Lather Be Shaving. Got to chat a bit with Matt Pisarcik (Razor Emporium) and Kensurfs (hell of a nice guy). Spoke with Leonard Ybarra for a bit as well. Fran (Doug's wife) was busy as heck but still very friendly.

I enjoyed the first panel discussion with Mantic, sat and listened to what I could hear of the Gentleman Scofflaw live podcast (lots of room noise), watched the Speed Shave and Speed Lather events, and after the I'd Lather Be Shaving show I left as I had smelled all the soaps, chatted with vendors and a few attendees, and overall had a great time for my first Big Shave event.

A couple of the vendors I had never heard of--Cooper & French and Gentleman's Nod, oh, and Henri Victoria. But all the folks were helpful and were happy to chat a bit. The EJ 3ONE6 was there as well--nice look and feel to it. I didn't buy one as I'm not much of a hardware guy; I did look for a metal slant but no one had one at the event.

Seen below, my new Crown King scuttle and Atomic Rocket brush, along with the event-only soap and AS splash. I used the soap this morning, with the new brush and scuttle, and I don't know if it was the soap base, the giant brush (26mm), or the ridged scuttle, but I got an insanely stupid amount of lather from the set up! Can't wait to try it with my other brushes and soaps . . . 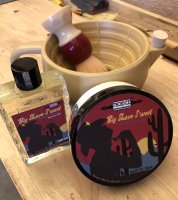 I won the below pictured Soap Commander Refinement set during the door prize give aways during I'd Lather Be Shaving . . . 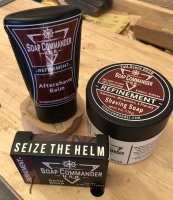 For those who may think I stacked two tubs atop one another . . . nooo. That's just one monster 6oz tub of soap. 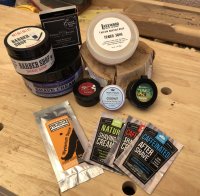 The HSSC Barbershop is something of an odd bird. I expected a barbershop-type scent, but it's described as "A powdery scent with hints of Bay Rum, Sandalwood and Patchouli". I haven't tried it yet, though. There's that other monster tub of Col Conk Rio Grande Lavender, and Lather Bros Take Out Night and Summer 305, both interesting/intriguing scents.

And lastly, yet more Swag Bag stuff. The only two purchases in this pic are the Elvado Royal Tahitian Lime ($6!, how could I say no?!) and the Cooper & French Leading Man sample, another nice, masculine yet classic kind of scent. 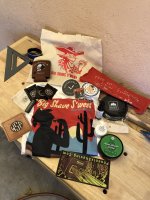 Forgot to note the black Pacific Shaving collapsible travel shave bowl. That was free, too! 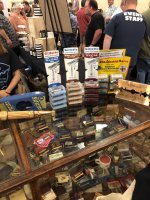 Who knew Unicorn Farts were a thing? 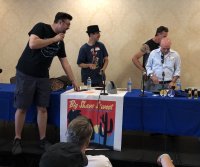 Nice Report & Thanks for the Pics!!

Nice write up guys, this looks like so much fun.
How much the EJ 3ONE6 went for?

Contributor
Ambassador
She told me the chrome version was around $40, and the 3ONE6 is stainless in various flavors, so I'm guessing a little more. I didn't ask to be honest.

The EJ 3ONE6 will be selling for $116 or somewhere in that neighborhood, which is about in the middle of the price range for stainless steel razors.

The event was a lot of fun and was my 4th Big Shave event.

Vendor
@DEPenguin
Quite the haul of goods! I hope you enjoy that Lavender Shaving Cream!

Colonel Conk said:
@DEPenguin
Quite the haul of goods! I hope you enjoy that Lavender Shaving Cream!

Yes, the haul was quite good, especially if one enjoys shave soaps! I'm fairly new to wet shaving and haven't tried Col. Conk products yet, but I was genuinely delighted to find not just a sample but a whole freaking tub of it in the swag bag, lavender to boot! I haven't had any lavender yet, either, but lots of guys seem to like it.

Thank you very, very much for your generosity to the community at large and for those of us fortunate enough to have attended the event. I have every intention of trying out the Rio Grande Lavender before the week is out.

I am sure you will like it . Its in my rotation.

I was recruited to do the lather challenge. Leonard showed us up, so you can bet I'll be practicing for a rematch next year. Really fun event with a bunch of great people.

Contributor
Ambassador
Garrett! I thought I recognized you from somewhere. Should have introduced myself. I must say you gave it a great shot in the lather competition!

Yes, the haul was quite good, especially if one enjoys shave soaps! I'm fairly new to wet shaving and haven't tried Col. Conk products yet, but I was genuinely delighted to find not just a sample but a whole freaking tub of it in the swag bag, lavender to boot! I haven't had any lavender yet, either, but lots of guys seem to like it.

Thank you very, very much for your generosity to the community at large and for those of us fortunate enough to have attended the event. I have every intention of trying out the Rio Grande Lavender before the week is out.
Click to expand...

Remember... It isnt an overly thirsty soap so start on the dry side. Add drops of water as you continue to fold the lather. You WILL be rewarded with an awesome lather!

Please let me know what you think of it once you try it! Id love to hear your feedback!

Contributor
Ambassador
You got it! I'm planning on using it tomorrow morning. Thanks for the advice on lathering it properly. I thought I had more or less dialed in most of my soaps but then I got a boar and a good synthetic and now I'm back at square one, so your advice will help!

I would LOVE to go to an event like this. Honestly it sounds like so much fun. Maybe in a year or so when I'm off of the island, I will get my opportunity. Thank you for sharing your experience. Great review of the whole event. That swag bag haul looks very generous!

DEPenguin said:
Garrett! I thought I recognized you from somewhere. Should have introduced myself. I must say you gave it a great shot in the lather competition!
Click to expand...

That was the first time I had touched a boar brush in over 3.5 years, and it didn't even occur to me until afterward that I should have taken advantage of the dome instead of the face to build my lather. Doh! Like I said, I'm going to put in some practice and request a rematch.

Moderator
Any talk of where the next event will be?

ackvil said:
Any talk of where the next event will be?
Click to expand...