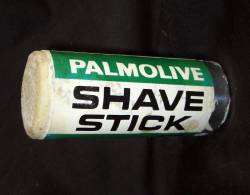 Pros: Cheap, smells nice, great lather and performance
Cons: Why isn't it available in Canada?
One of the cheapest and best sticks on the market. It has a clean, soapy, and nice traditional scent, it lathers very easily, and it performs really well and it's also very skin-friendly. I wish I could buy it here in Canada.

Pros: Shave Stick
Cons: Vintage, Scent
I originally bought a German travel kit where you have the leather pouch, comb, DE razor, toothbrush and stick holders. There was no toothbrush, the DE was a no name German Tech type razor and I was surprised to see a shave stick in one of the tubes. It was used but barely. So, I removed the cap and took the label off (I took some pictures first that could be found here : http://badgerandblade.com/vb/showthread.php/258838-Australian-Palmolive-Shave-Stick?p=3768749#post3768749

The scent, like most vintage shave stick, is now gone. I get some a play-doh type of scent. The lather on the other hand is A1. It's very different compared to the current production of the Australian Palmolive and event the Euro Palmolive. This one is much better. It's fairly easy to use and I would quantify this one as a top shave stick.

It always make me wonder what was the original scent. It's closer to the Euro palmolive but not quite.

I tried it against the other vintage sticks that I have. I used Tabac instead of the Sir Irisch Moos as I always found those two to be equal in performance.

I think this one is a notch below the Sir Irisch Moos because of the scent. If you find one, yes grab it! If you don't, well, you could always go for other shave sticks that are equal in terms of performance.