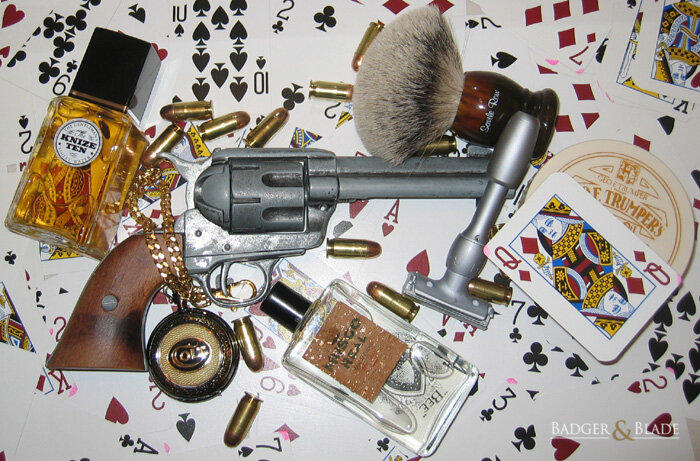 Shot that one Nick! So much for all Soaps Day....

BTW, is that a Sturm Ruger?

Nick, I was going to give you demerits* for breaking the soap cycle, but now that I see that gun....

*10 days of shaving with edge gel and a cheese grater

Doh! I didn't even notice!!! I swear!! Would you believe me if I said that that's Trumper's uber-secret Coconut Oil Shaving Soap?

Of course it would've been better if I used a soap, the picture would've looked purdier if I put my Filarmonica in there too (instead of the oh-so not western looking Vision), but alas, that would be a lie, and I believe strongly in the integrity of the SotD.

That's actually a replica Colt .44; however, Ruger does have some beautiful six shooters. Funny thing (don't tell Scotto!), that thing's just a $50 paperweight. It fires dummy rounds, and has mechanical functionality, but nothing more. The bullets aren't even .44, they're .45 ACP.

Do tell on this soap! Is there an alpha and a gamma also??

Scotto said:
Do tell on this soap! Is there an alpha and a gamma also??
Click to expand...

My Goodness Scotto! Don't you New Yawkers know anything? That's specially made for shaving those cute little fish silly boy...