Even though I don't travel much, I really wanted to get a travel brush. This was just for the neat factor. Truefitt & Hill makes a good brush for around $75, but a lot of people told me to go with the Simpson. Lee at Leesrazors sells them for an unadvertised price of $125 (shipping included), which is by far the cheapest I've seen. When the brush arrived I was surprised by the size of it. I thought it would be a little bigger. 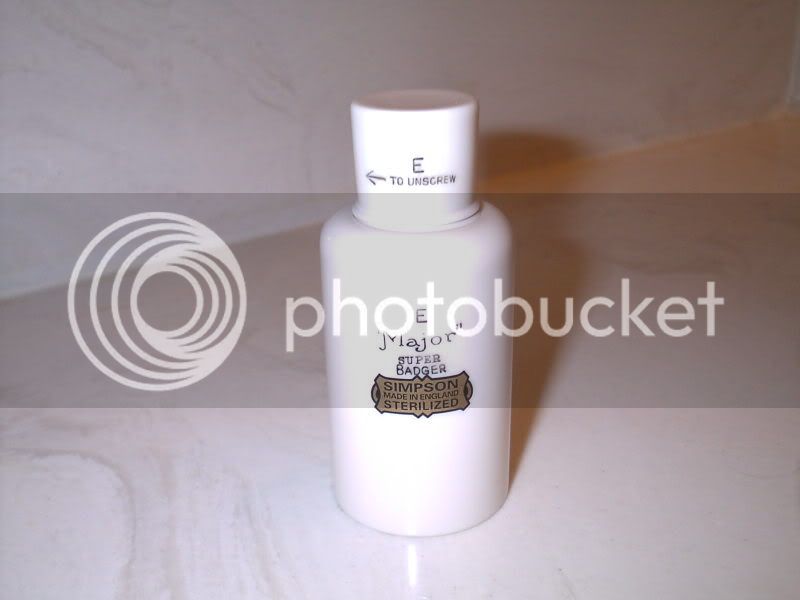 Don't ask me why Simpson stamps their brushes and puts a cheap sticker on them. My Rooney has a much nicer badge on it that is still very simple. I know the sticker will come off as everybody seems to lose them, but I also feel the stamping will rub off over time. Not reall a big deal, but I just wonder why they do that. Maybe it's some sort of old-school tradition, but I'd like to see them clean that up. 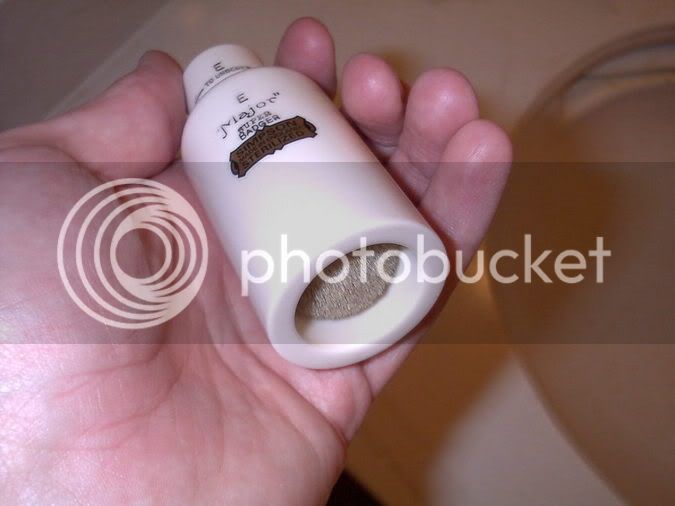 Here you can see that the brush is nicely squeezed into the body of the Major. Unlike a lot of travel brushes the Major has an open end and the brush screws into the case while packed. 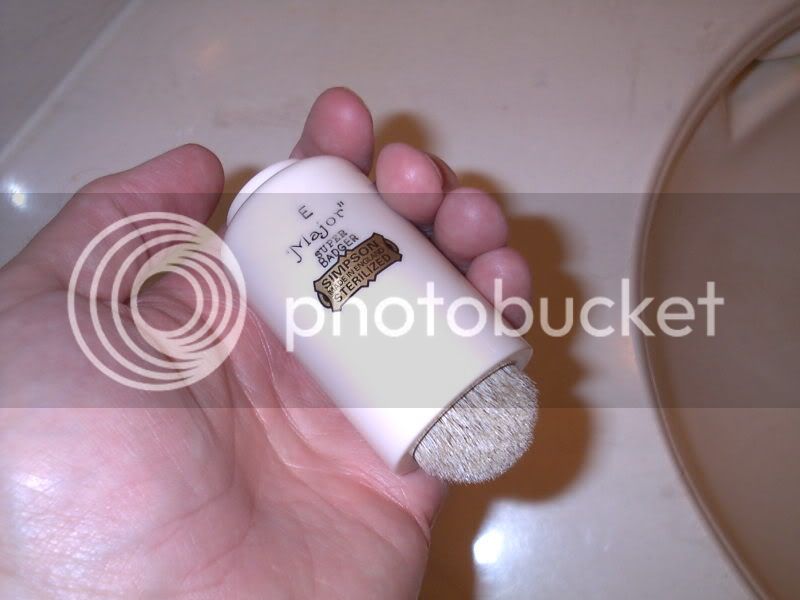 Twisting the handle pushes the brush out of the case. Once out it can be screwed back into the case on the bottom to give it a handle. 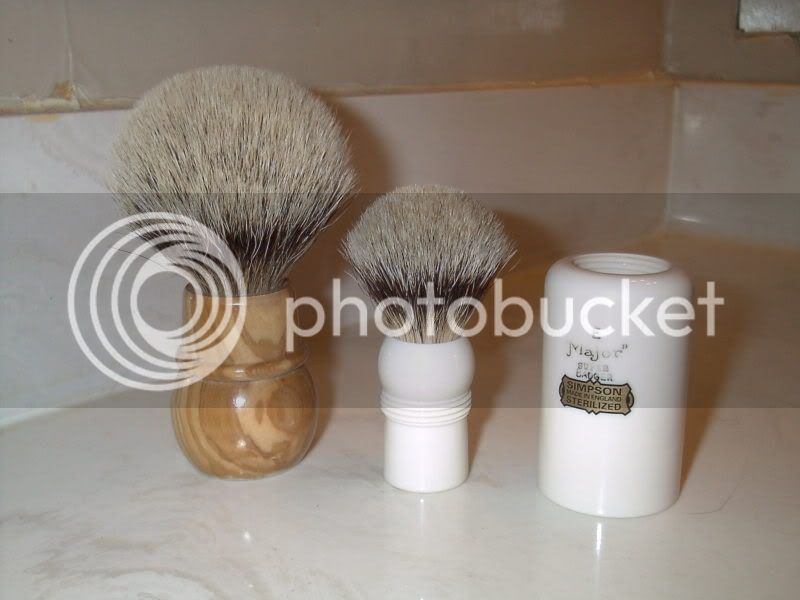 The brush itself is very tiny. It's much bigger than a Wee Scot, but it's still pretty small. I think the knot size is 19mm, but it's extremely dense. It seemed to be just as dense as a Chubby. It also has a short loft, so it doesn't look very intimidating. Here you can see how it's dwarfed by my 24mm SMF II. 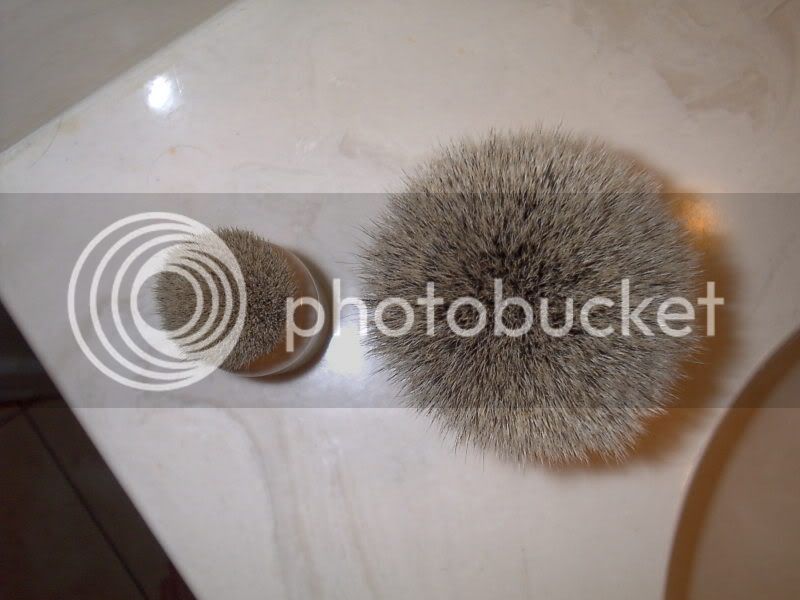 Here is the Major next to my Rooney Large. The Rooney is a pretty dense brush, but the Major is extremely dense. 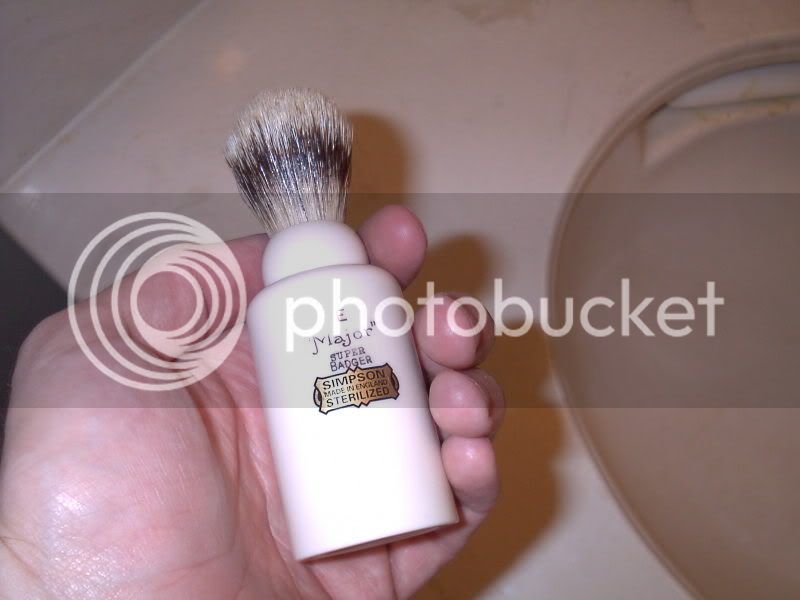 With the brush screwed into the base the Major has a pretty beefy handle. I've read that some prefer to use the brush without the case as a handle, but I like the bigger feel with it attached. It's much more comfortable to me than the brush alone. 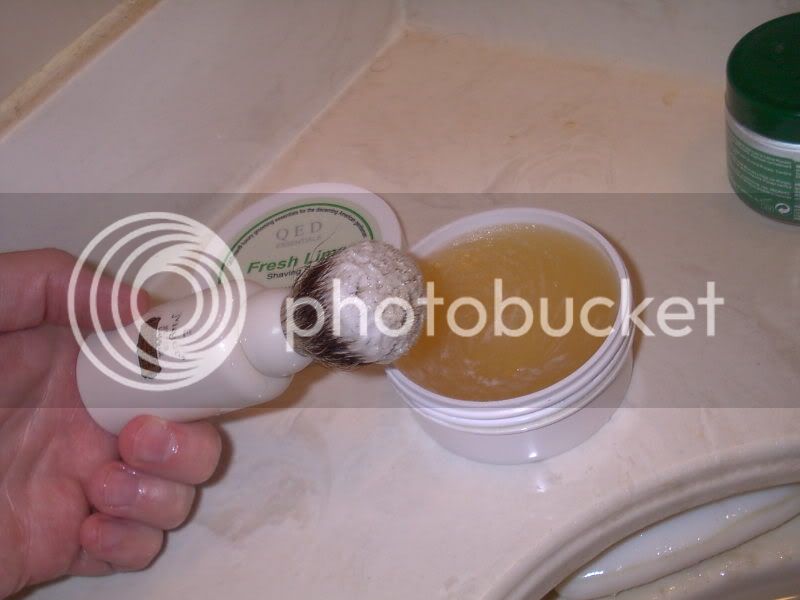 Since I plan on taking my hard case of QED Fresh Lime with me as a travel soap I thought I'd use it as my test model. Here we are after a few swirls on the soap. 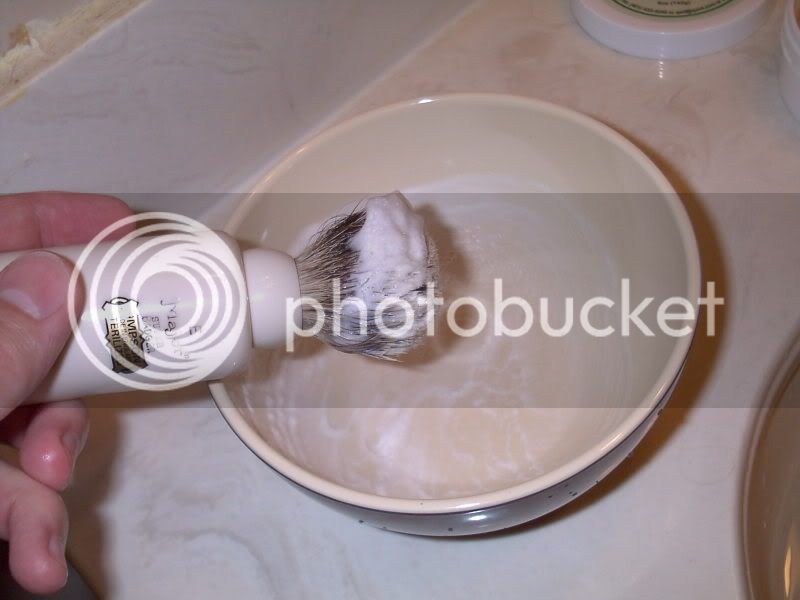 After five seconds of whipping. I don't plan on bringing a bowl when I travel, so travel shaves will be whipped up directly on my face. The bowl just makes it nicer for the photos. Trust me on that. 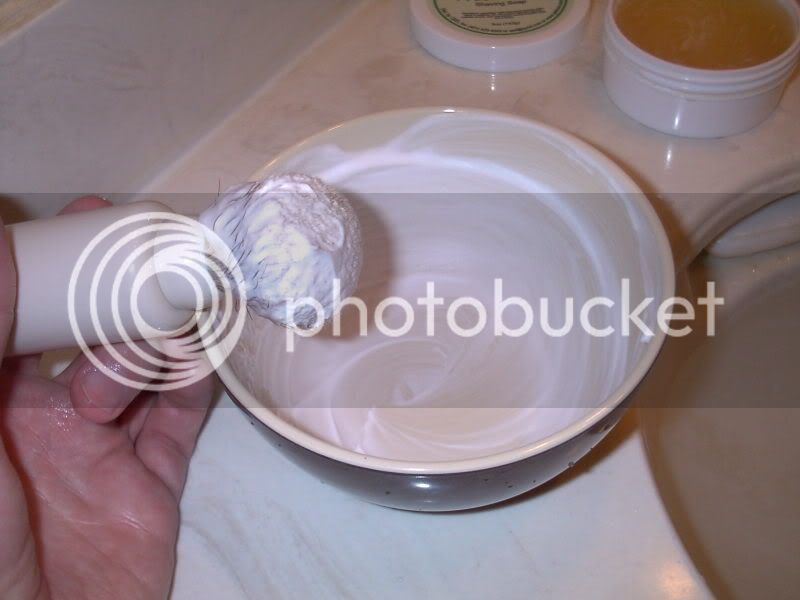 After thirty seconds of whipping. No water was added.

I had my doubts that such a small brush could give me the kind of shave I've gotten used to. When I lathered up I simply brushed on the first layer. For the second and third layers I used the brush in a scrubbing motion to whip up the lather hidden within. 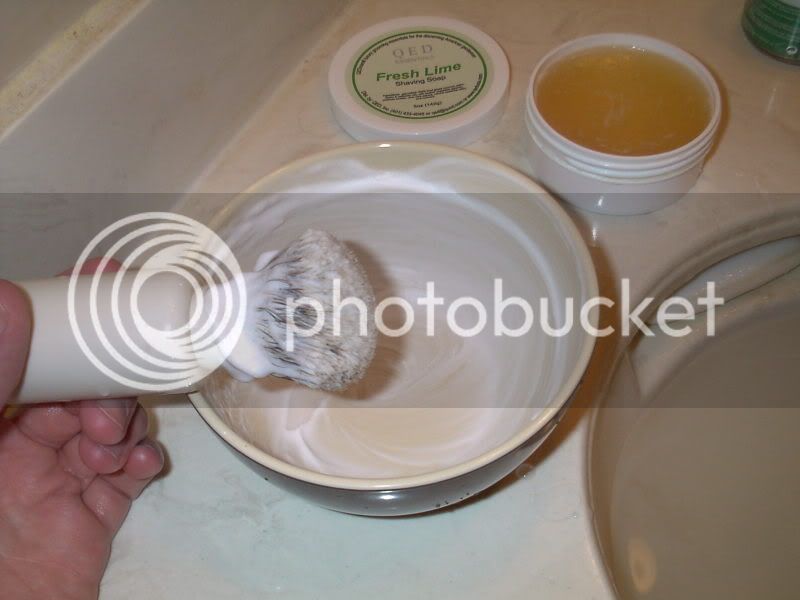 After three full passes. I never even had to use the lather that was in the bowl. Surprisingly this little brush held all the lather I needed.

I am very impressed with the Major. The Super bristles have a pretty soft tip, but they are so short and densely packed that they provide a nice scrubbing action. Throw this little guy in your shaving kit and you're ready to hit the road. I lost two hairs on the first shave, but haven't lost any since (four test lathers). There are plenty of good travel brushes out there, but, unlike regular brushes, I didn't want to buy more than one, so I wanted to make sure I got the best. The Major is an incredibly well-built brush that provides one hell of a shave. Even though it's a travel brush, it is such a pleasure to use that it will remain in my rotation and will not be limited to travel. This really could be an everyday brush. It's a little expensive for a travel brush, but considering it's also good enough to make my rotation I think it's well worth the cost. Thanks, Joel, for making me flat broke.

Awesome review! BTW - there is nothing like that QED fresh lime. I literally have to fight myself to not use it every day suring the summer.

McNutt said:
... When the razor arrived I was surprised by the size of it...
Click to expand...

Tony: Very good review and nice looking brush. If I were going to buy a travel only brush, the Simpson Major would be it. I had bought a PJ1 in best for travel and it sucked. Now, I will use one of my regular brushes since I do not travel much. I will use the size 12 Black Badger Plisson, or the Salters brush for travel

Tony,
Very informative review and great pics. Many of my questions about this brush were answered. Thanks.

Does anyone have a picture of this brush next to a T&H Turnback?

roughrider said:
Does anyone have a picture of this brush next to a T&H Turnback?
Click to expand... 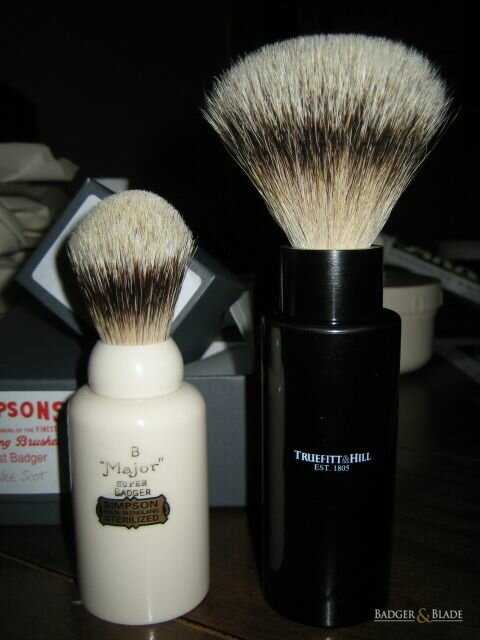 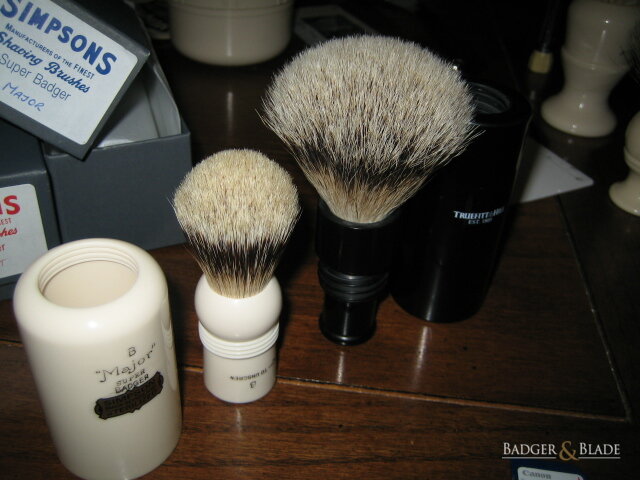 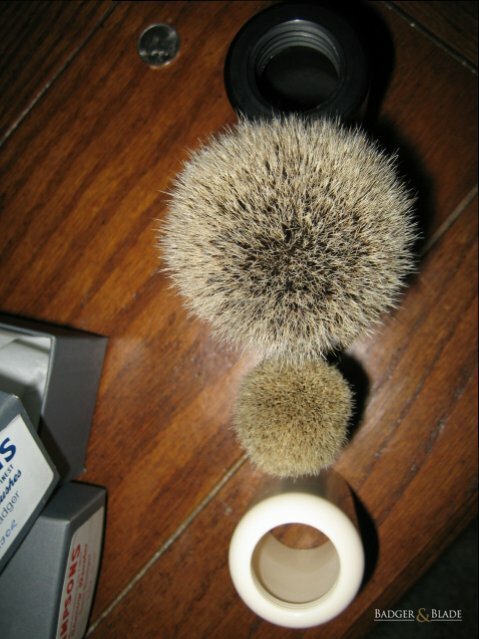 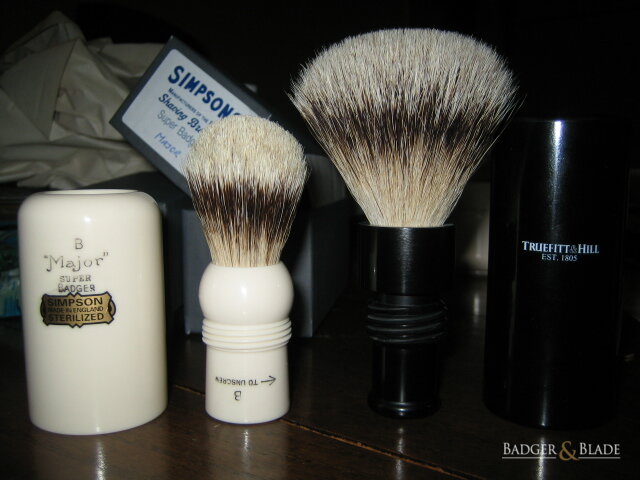 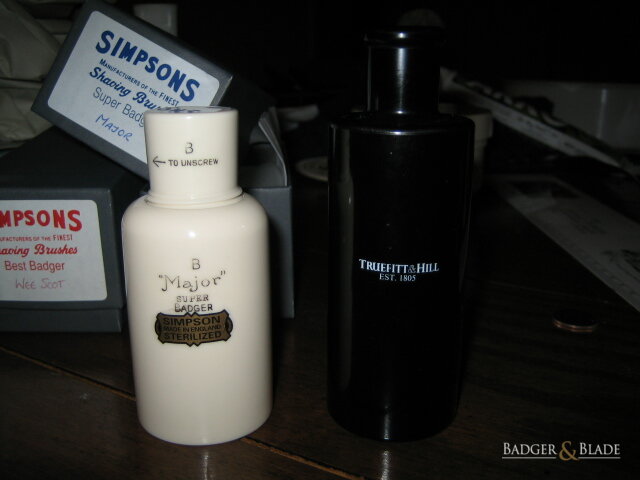 I can't say enough good things about this brush. I had hoped I'd use this brush for more than travel, but I never imagined I'd use it as much as I do at home. This little guy is a demon with soaps. The head is soft at the tips, but it's extremely firm and provides a fantastic scrubbing action. Thanks for recommending this brush, guys. I would have kicked myself in the *** if I had bought a different one.
You must log in or register to reply here.