Sealed NOS needs to breathe? Related: how do you gently remove surface rust from satin finish and gold etch?

Summary: Be careful with a razor that has been sealed for more than half a century less than a week after opening it; the metal may be more reactive than you expect.

I had the great fortune of coming upon a sealed Puma razor. Being very happy with my varied selection of considerably less valuable but also less pristine razors, I thought I'd sell it rather than have the responsibility of looking after such a fine artifact. Naturally, it began to find its way back to the rest of its family under @Polarbeard 's watchful care. While very willing to take this off my hands once I opened it and confirmed it to be 6/8, he was generously considerate to remind me at different points in the transaction that this was an opportunity to experience something rather special and perhaps I wanted to keep it? Over time that finally sank in and I realised I would miss the razor more than I'd welcome the extra cash. This after I confirmed twice yes, I wanted to sell it. Not only considerate, he is a patient man.

Today, six days after opening it, I gave it a try. The shave was promising, glad I kept it. I tried the factory edge as their marketing materials were quite proud of it and I thought there was some chance the package had preserved it. While time hasn't been kind and I did get some more irritation than usual, it was still plenty sharp enough to do the job and give me a hint of what I'll enjoy from this fine tool in future. Took my time, probably over half an hour, but I didn't set the razor down to take a break or anything like that and was rinsing throughout. Thus, this came as a surprise, rust!

Haven't encountered steel quite that reactive in the 30 or so blades I've tried so far. My guess is that, while I opened it 6 days ago, it only saw soap and water today and that washed away some residual oil that was protecting it so it became exposed to oxygen for the first time in decades shortly before having to put up with aptly named wet shaving. I did wash it before stropping so in hindsight I bet my main mistake was proceeding to shave at that point rather than giving it a few more days.

Initially it looked like I was lucky and it missed the etch. Upon closer inspection, the second S is not unscathed: 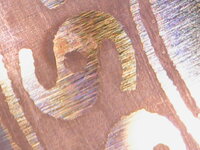 The two tools I have for dealing with rust are metal polish and evap-o-rust. An initial suggestion was to use the metal polish with a q-tip but that didn't go so well when I tried it on some stubborn water marks, not even rust, on this Dovo--it left these two slightly shinier patches towards the toe that were part of why I felt it important to include this picture in my ad when I sold it recently:

Beyond polishing some of the surrounding area to blend it in a bit and of course polishing as little as needed to get rid of the active rust, any other suggestions on how best to deal with this?

Anyone else have this experience with a new razor being unusually reactive?

(Edit: Phew, decided to try some super light polishing so at least the rust-protective aspect of the metal polish could safeguard it overnight and turns out the rust is as superficial as can be so, fingers crossed, I can get all of it without leaving a trace. Did need polish though, not much came off with just light rubbing.)

They make brass and Fiber Glass brushes that remove rust fairly efficiently.Gold Wash can be tricky to deal with .The special quality of Puma Razors is the quality of Steel and the grind . A properly honed Puma razor can provide a fantastic shave on a consistent basis . I would not get too worked up over that level of rust .The razor is over 70 years old .If it were mine .I would clean the rust up and hone the edge to 16K-20 K.If you do not hone much send it out to doc226.Then enjoy the quality of an Era past .Puma's are truly special .Enjoy that work of art .

Rust on gold etching is a big problem, at least for me. I have not been successful removing rust off gold etches without damaging the etch even after many hours of polish.

I hope you find a solution and share your findings. Great razor.

I have had ballistol on a razor that had a bit of discoloring on the gold wash. After a few days I removed the ballistol and so did the discoloration. Could maybe try that? I have that same razor and it makes for an excellent shaver, enjoy

Thanks for the tips all. The brass brush sounds like it'll be too harsh, but maybe the fibreglass? That'd disrupt the satin finish less than metal polish? Ballistol keeps coming up, I'm going to to have to get some of that, would like to try it for honing too.

Opted to carry on with the metal polish because this was so very superficial that it just came right off with the most minimal of pressure. You can barely tell it was done but if you move it in the right light it's ever so slightly perceptible: sort of doesn't look quite as clean as it is due to the slight variations in the satin finish. With a little more smoothing might be indiscernible but I'll leave that until after the next couple times I use it (after letting it breathe for a while) on the off chance it's still like that (hope not).

And I'll check back with this S every few times I use it, afraid it's a bit more vulnerable now: 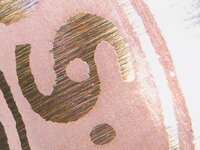 You mentioned you had EvapoRust on hand. I would avoid using that on razors. I tried using it on some really rusty old blades as an experiment. It really just loosens the rust and makes the metal darker (or black) in the process.

Joshua223 said:
You mentioned you had EvapoRust on hand. I would avoid using that on razors. I tried using it on some really rusty old blades as an experiment. It really just loosens the rust and makes the metal darker (or black) in the process.
Click to expand...