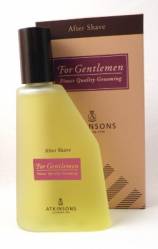 Loading…
Pros: nice scent, performs well, great bottle
Cons: expensive
Price: Expensive. Since this already is not the cheapest aftershave out there and it has to be shipped from overseas, I'm left with the most expensive aftershave I've purchased thus far. Quality: Good. Pretty much standard AS far except you get some "nicer" ingredients such as witch hazel and the like. Fights Razor Burn: For me, this a real N/A. I rarely get razor burn anymore, and when I do, there isn't much that can be done except waiting for it to go away. Alcohol based aftershaves provide fleeting relief because the burn and pore tightening sensation simply distracts you from the razor burn. My theory anyway. Cooling Sensation: This is not a cooling, heavily mentholated aftershave. Not a big deal for me since those aren't what I tend to like anyway. There is some menthol, camphor, etc. that adds a little bit of subtle cooling effect to the AS but it's not something you will notice unless you look for it. Scent: Quite nice, but strong when it first goes on. This is basically the Atkinson's English Lavender Cologne scent, except this AS has a slightly sharper, citrusy-scent to it. Efficacy: It does what an aftershave is supposed to do. Moisturizing: I always follow up alcohol based splashes like this with a moisturizer. On their own, they don't provide much moisture. No Alcohol Burn: It does burn when first applied but that's normal for an AS like this. The burn is definitely not the worst I've encountered among the aftershaves I've tried. Overall, worth seeking out, especially if you like Atkinson's English Lavender Cologne.