History of the shaving brush

Little is known about the history of the shave brush. Wikipedia states that "The modern shaving brush may be traced to France during the 1750s" but cites no sources for this information. Plisson may be the oldest maker of shave brushes still in operation, dating from 1808. Kent has been in business since 1777, but they began making shave brushes circa 1850 (according to an email exchange with Marcia Crosby of Kent).

In "One thousand beards: a cultural history of facial hair", Allan Peterkin states that the shave brush was invented in France in 1748. However, he does not appear to cite any sources or provide any additional detail. It is possible that the shaving brush appeared even earlier. For example, the catalog for the 2011 "van Otterloo Collection" traveling exhibition lists a painting titled Barber-Surgeon Tending a Peasant's Foot, dated ca. 1649-50, by Isaack Koedijck. In one corner of the painting is a bristly object that the curator describes as a shaving brush. That would place the shaving brush as early as 1649, not 1748.

According to an English source published in 1830[1], "Before the year 1756 it was a general custom to lather with the hand but the French barbers about that time brought in the brush. It was an old saying: A good lather is half the shave."

Another source, from 1873, quotes a letter from 1814 that corroborates the practice of lathering by hand, and quotes another source for the 1756 date. 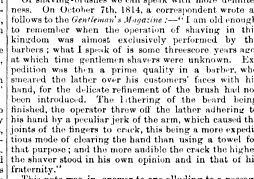 In "The furniture of our forefathers, Volume 2", Esther Singleton and Russell Sturgis mention shave brushes dating from 1756 and 1761:

If the above is true, this history leaves open the question of the brush's origin in France. Unfortunately the French version of wikipedia does not seem to document this history. The Hungarian Hussar 1756-1815 (David Hollins, Darko Pavlovi) mentions a shaving kit as part of each Hussar's equipment, but includes a boot brush and clothes brush without specifically including a shave brush. This source is inconclusive, but perhaps shaving brushes were still rare at this point in time.

However the shaving brush arrived in England, by the beginning of the 19th century it was a common utensil. In this passage from "Mechi's Catalogue of Cutlery" (dated 1800 by Google, but more likely ca. 1830), we hear of shave brushes and face-lathering. The writer goes on to describe cleaning the beard before shaving, recommend stropping techniques, prescribe pre-shave oil for sensitive skin, recommend cold-water shaving, and describe skin stretching. The author also recommends two practices that are deprecated today: shaving immediately after getting out of bed, and leaving extra lather to accumulate in the brush. 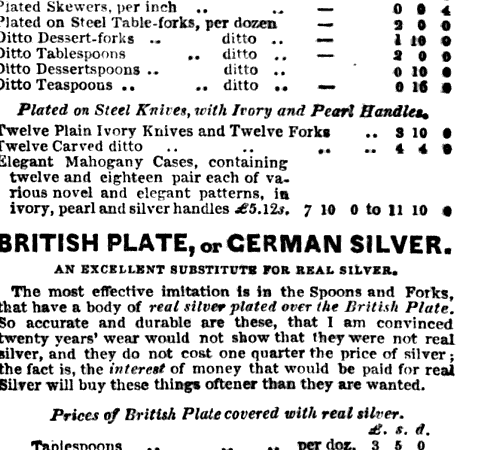 By 1843 Mechi was advertising badger-hair brushes for sale in The Spectator.

Early shave brushes may have been imported from France, but brushmaking quickly became an established trade in England too. By 1867, according to Caroline Wells Healey Dall, the formation of fan-shaped badger knots was a well-paid niche for women brushmakers.

During World War I, hostilities interrupted the established market for boar bristles and badger hair in Germany. By 1916 brushmakers in the USA had turned to black bristles sourced from China, a grade known as "Rachto".[2] However boar bristle of any quality was in short supply in the USA. During this period some brushmakers began using horsehair.

By 1921, many Americans used widely-available and low-priced horse-hair brushes. However, an anthrax scare and related deaths effectively took horse-hair brushes off the market for many years. Wallace's Death by Shaving documents one such death and provides sources for further reading.