Been searching for a Ziglar Slant Razor since I lost the bid for one about a year ago. At that time I didn't know how rare they were or any history behind them. If I did, I would not have bid only $30. ;-)

They hardly showed on eBay since that time and just recently a bunch showed up. I was lucky enough to get one (for way more than $30). For those that care and don't know, there were only four major slant razors made in the USA, which was different from Europe where almost everyone big and small had a slant offering. I guess the USA market was content to do the Gillette Slide. Two of the four manufacturers were Krect and Ziglar (which I own).

The Krect was amazing because it had a top cap about as thin as a Tech, but had multipe curves that torqued the blade very aggressively. Where the Krect was a design lesson in simplicity, the Ziglar was totally on the other end of the scale.

Upon close inspection of the Ziglar, it seemed to combine all the characteristics of the different slants. It torqued the blade significantly (making it a torqued slant), it had a head that was pent higher on one side than the other (making it a diagonal ), AND it had a parallelogram shape like the Irwing (making it just an unusual razor). Oh yeah, and it was also open comb. 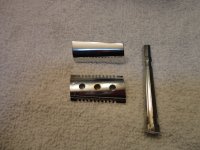 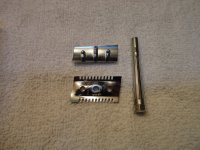 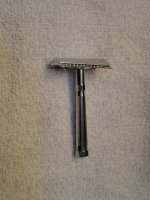 I have included pics of the Krect and Ziglar next to each other. One can immediately see that the head of the Ziglar is massive compared to the Krect. Not only does the head cover the blade completely, but the base plate is open comb, making it wider. The head also is domed like a diagonal, however one side is not thicker than the other. Instead, there is a hump that runs diagonally across the top cap so it would not matter how you hold the razor, one side will always be thicker than the other side. Also the parallelogram head meant that one side of the razor had more blade exposure than the other. The base plate is built up in the middle where the screw post goes through, making the Ziglar a very bulky and heavy razor. 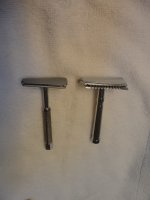 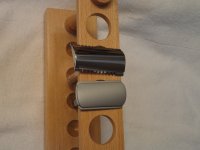 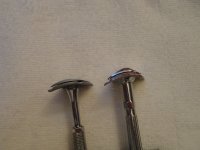 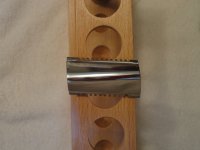 Okay, so enough of the talk, how does it shave?

First pass was WTG. As with all my razors, I started with a very steep angle. This was a good thing as I was able to get the diagonal setting correct. At first my angle was too steep and so I lessened it a little and found that the open comb was not the normal type. These were flat and if the angle got too shallow, you will feel the edges of the comb scratching your face. On a positive note, the razor was so heavy that it was easy to go with no pressure and let the razor do the work. Still, at the end of the WTG pass, there was more stubble than I expected.

I just did a touch up after the ATG pass and, I was rewarded with a BBS shave.

Overall, I must say that I was very impressed by this strange razor. Having just shave with my Krect two days ago, I can say that the Krect was more of a nimble sports car and the Ziglar was a luxury sports sedan. Both got me effortless two pass BBS shaves, but I didn't have to do barbell curls at the gym first in order to shave with the Krect. The Krect also had a small head that was more manueverable in the tight areas.

If I managed to perk any interest in the Ziglar (or the Krect), I would encourage you to get one and try it out, or as they say at B&B - Get Both!

Interesting. Haven’t had the itch for a slant. Thanks for you comparison!

I know you are a slant razor collector enthusiast and I really like slants also. Its great that some collect and show them because it is neat to see what that generation was capable of in those days. Here you get a BBS 40> years later is amazing to me. The Ziglar O.C slant must of been a well sought after razor is my best guess, it must of been hard to make in those days also, but none the less they made a nice product. I lucked out here recently and bought a Wunderbar slant. Its hard to phantom that Wunderbar slant is robot CNC machined and the Ziglar was stamped out and a poured handle maybe and get very similar results- its seems like with in a 80 yr time span we are in the robot era?!? What time era was the Ziglar slant MFG, just curious?

The Ziglar has a stamp on the bottom of the base plate that reads Pat 1957 and so we are looking at a pretty recent razor (at least around our age). ;-)

The Krect was in the 1930's and this was the later traditional three piece model. An earlier model with the same head design had a hook and latch system to secure the top cap.

I first got interested in the Krect when Phil over at Bullgoose said his next project after the Darwin clone was going to be the Krect. I spoke with him a couple of times and he mentioned that it was almost impossible to make using modern machining technology especially the thin head being curved in different directions. I am seeing where the Ziglar might be a little easier, but not a cheap proposition.

Ambassador
GREAT PICS!! Also really appreciate your explanation of where this one fits into that slant world!

I have three slants at this point; finding this research important.

Marvellous review, thanks very much! I love those pictures, especially the last two where the ridge on the Ziglar is very well shown.
I found the Ziglar efficient, yet very mild, milder than the three-piece Krect. How would you rate it?

Wow, interesting. Thanks for the thorough explanation and history. That's a cool looking razor!

efsk said:
Marvellous review, thanks very much! I love those pictures, especially the last two where the ridge on the Ziglar is very well shown.
I found the Ziglar efficient, yet very mild, milder than the three-piece Krect. How would you rate it?
Click to expand...

I also found it very mild. In fact, when I was trying to find the right angle, I had to constantly stop to see if I was actually cutting or just clearing lather. MOST of the time I was cutting. Just a smooth razor. When shaving with this and the Krect, I keep wondering what things would be like if Gillette ever embraced the slant design.

I wonder why diagonal slants are not now made? The only ones I have seen are "vintage" usually.

Old-Fashioned Coughy Pot said:
I wonder why diagonal slants are not now made? The only ones I have seen are "vintage" usually.
Click to expand...

The Ikon 102 and the PAA Alpha Ecliptic are current production slants (but they are clones of earlier diagonal razors).

The fourth American slant, sandwiched (I think) between the Irving/Krect and the Ziglar on the timeline, was the Schotz.

Salty O'Rourke said:
The fourth American slant, sandwiched (I think) between the Irving/Krect and the Ziglar on the timeline, was the Schotz.
Click to expand...

Okay, that makes five. I didn't know about the Schotz. The fourth I was thinking about was the Pacific which had a ball joint below the head making it infinitely adjustable as a diagonal razor. It also had a plastic roller as a guard with one side being of a larger diameter than the other giving it a differential shave setting.

I find the Ziglar to be one if not THE best shaving slant..I find the Krect to be a finicky (must have the correct angle) to cut hair..The Ziglar, I can get BBS in 2 passes..It's the one I'll keep...no wait I have 3, so the 3 I'll keep