I'm in the mood to buy a new razor. I like how OC razors look. Are OC razors as good or better than straight bar razors? What OC razors I should consider? 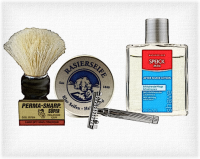 If you don't like the smaller size handle, a thicker handle is also available.

If you aren't interested in a slant, there is the standard Fatip, with small (Piccolo) or large (Grande) handle. 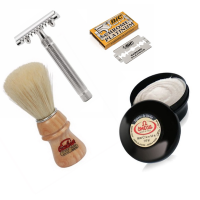 I am not a huge fan of Gillette but my favourite OC razors at the moment are the Gillette Single Ring and the Goodwill. This is assuming that by 'new' you mean new to you, and not brand new. If the latter then I have no idea

Gem Damaskeene SE OC. Best shave I’ve ever had. However, as a always, your mileage etc.

Contributor
Ambassador
My favorite is a Gillette Goodwill #160.

It might sound like heresy, but I love the double open comb razors from Phoenix Shaving. My DOC Ascension Twist Adjustable is very smooth, efficient and well built.

For years my safety razor of choice had been an open comb Mühle R101 (black handle version of the legendary Mühle R41), but I clearly prefer now the stainless steel Masamune Nodachi. I consider this razor one of the few safety razors that can match a straight razor shave in closeness and smoothness.

You can order the Masamune Nodachi in a version that arrives with both open comb and closed comb plates but I found that there is no noticeable difference between the two. IMO, this can be explained by the identical blade exposure and blade gap of both razor heads.
So open or closed comb design becomes merely a question of which way you prefer the lather to be discarded after a pass.


So, is an open comb razor better than an open comb?
That depends how you define “better”, but an open comb design by itself does not make a razor any more aggressive or closer shaving.

Gillette Brazilian Goodwill (bought thanks to @Hannah's Dad : found it by chance on a Brazilian auction site. I was new here, PMed him, who told me to jump on it). 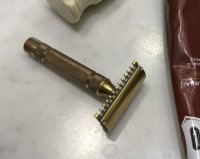 Whether OC is better than SB is a YMMV, so no right/wrong answer here.

My vote by all account goes to Blackland Vector OC, it's one of the very best razors I've ever used.

Pearl OC razors and Gillette NEW LC are my favourites.

ohansen said:
I'm in the mood to buy a new razor. I like how OC razors look. Are OC razors as good or better than straight bar razors? What OC razors I should consider?
Click to expand...

A few questions, if I may:

What is your price range?

Old Type
New Improved
New Deluxe
RFB New (this one is essentially the same shave as the flat-bottomed New that I now have; sold the RFB)
iKon Deluxe OC
Merkur 1904
Fatip piccolo

and the OC sides of the following dual comb razors:


For me, the flat-bottomed New Long Comb made in Britain out-shaves all of them, with the exception of the RFB New.