Seen a few videos of these and wondering how they would compare to the only 3 synthetics I have:

A Clubman (small and doesn't generate much lather, but ok for travel); a Real Shaving Company (just about useable) and most recently an Alpha Rubberset tribute, which is by far the best synthetic I have ever used!

Do these brushes compare at all in terms of bristle quality to the Alpha? I would be doubtful of the quality due to the price but the handles look really good and tuxedo knots do look like good quality but I'm wondering if the road really meets the rubber(set)? (see what I did there lol?!)

I've got a Yaqi Naples Tuxedo. Great brush. It's got a nice bristle density, great backbone and soft tips. I think synthetics will take over the market for shaving brushes in the near future. For me, they provide the perfect combo of softness and backbone to create a great lather, exfoliate the skin, and distribute the lather evenly throughout the shave. At $17, it performs better than a $100 silvertip badger. You can't go wrong. West Coast Shaving sells them.

Occasional reported glue bump issues aside, at sale price it's safe to say that Yaqi currently stands at the very peak of the performance to price ratio pyramid for both synths and badgers. I do own a few and I can see why they've received such praise over the past couple of years.

Due to my location, the affordable brushes I can get are mostly from Yaqi. I have various types of synthetics and badgers from Yaqi and to me, they are of good quality for face and bowl lathering producing excellent whippy like lather...
These are in my collection...13 are from Yaqi. The best synthetic for myself is the 26mm Rainbow with a brownish soft brush.

I’ve only got one Yaqi, a synth rainbow, and I love it. 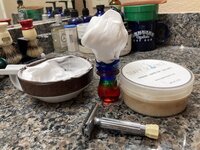 I also have the rainbow and also probably consider it my favorite knot. The aqua tuxedo I like sometimes for it's stronger backbone also looks the best to me. I also have the purple haze mew, and the bluish violet. I haven't tried other synthetics, but I haven't encountered any quality issues, they all easily create lather. I have considered a trafalgar at some point just to try something else. I would look more at the type of knot and it's qualities such as backbone and softness and whether you would like it or knot.

Haven't seen yaqi buyers who really regretted.
Some people mentioned the bumpy glue for a while, but most people still love their yaqis.

I have four yaqis and am satisfied with it.

They are superb brushes!!
And Yaqi is the king of value for money!

Yaqi synthetics have gotten better over the years. They are so inexpensive and perform very well. Style is a matter of taste, but some of them are truly unique and unusual. It's difficult to go wrong. Here are a few stand outs, that I'm familiar with:

I'm another happy Yaqi customer. With regard to their synthetics, my favorite (like many posters above) is the Rainbow Brown brush. I also like the Yaqi 2 band badger brush I own - the 26 mm Moka Express.
A

I love the synthetic Yaqi Sagrada Familia! Great performance all round. For the money you can’t go wrong and there is a wide choice of models/sizes.

Yaqi synthetics are definitely great brushes, both in performance and in value. I have enjoyed most of them but couple of my favorites are the tuxedo and timberwolf synthetics. 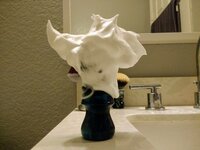 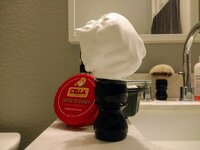 Recently bought my first Yaqi tuxedo based on reviews and have to say I'm mightily impressed!

Previously I'd only used smaller synthetics, probably not unlike the Clubman and RSC you mention, and there is truly no comparison.

I really like my Yaqi synthetic brushes and they are reasonably priced. Of all of them I like the Tuxedo knot 24mm with black marble handle the most- great feeling brush, but the others are also just as enjoyable IMO. 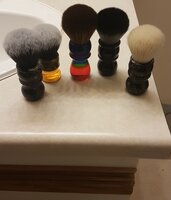 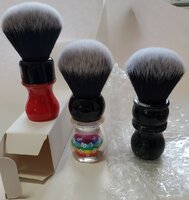 Thats the thing ive found most silvertips dont have backbone its soft sure but yea..went looking to replace my wahl traditional silvertip and as soon as i pushed down on any brush it went completely flat with no resistance at all ...i was like what really...may get a yaqi for the heck of it sometime soon in life

Do you go just the HD knot or the plisson

energyloop said:
Occasional reported glue bump issues aside, at sale price it's safe to say that Yaqi currently stands at the very peak of the performance to price ratio pyramid for both synths and badgers. I do own a few and I can see why they've received such praise over the past couple of years.
Click to expand...

exactly same as my opinion.

hcoop111 said:
Do you go just the HD knot or the plisson
Click to expand...

Don't forget there is the biggest sale of the year coming up soon around 11/11.

Check out the pictures and opinions on this thread. I would suggest the Pony or Tuxedo knots at 24mm-26mm depending on your preference. The Moka Express Synth is also another very good one. 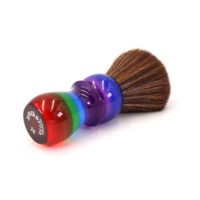 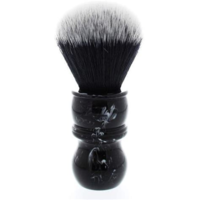 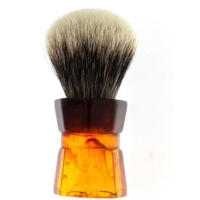 I just picked up one of the metal handled ones (as reviewed on this site by amateriat in December 2018). It's tried the ridiculously cheap Wilkinson [black] bowl (my "New brush. If it'll later that, it'll lather anything" reference soap), and it had a flirtation with ToBS Peppermint on Saturday, because the morning was kind of going that way. It's a nice brush.

It'll be out again in a few days. I'm looking forward to introducing it to MWF, and I'm expecting great things when it meets the Erasmic bowl (not much more expensive than the Wilkinson, but that's my preferred "where the hell did all of that come from?" soap).
You must log in or register to reply here.
Share:
Facebook Twitter Reddit Pinterest Tumblr WhatsApp Email Link
Top Bottom