A simultaneous goodmorning, good day and good evening forumites. And good night I guess. Why not.

I wanted to know what the fuzz about superstone was all about so I got some of those smaller pieces you sometimes see at the stone hustlers, and instead of buying the 8 x 3 x whatever, maybe there's something to experiment with in the awfully tiny ones. 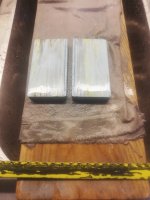 The teeth of the blade was down to half of its original size. Sawed it under running water. 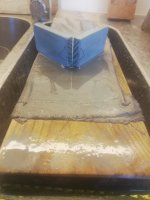 Flatted the down side of the pieces and marked the joining ends or whatever. Important thing because the ends weren't exactly at 90° so flipping them around for a while seemed to make sense, since more lapping needed to be done, more or less stone needed to come off depending on how the pieces where combined, hence the markings. Just to remember. 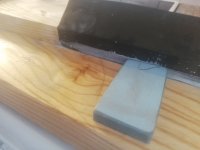 Correcting the end surface on some w/d paper glued to squared wood. Totally unnecessary when I discovered that you can just put a diamond plate and put it against the (aw man I run out of English woodworking terms... "Anhållet" if your Swedish)90 degree surface and flatten kinda upright. Leads to more play and uncertainties perhaps but pretty fast and pretty mobile. 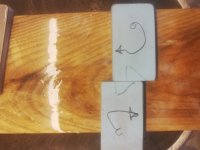 OK so sorry if I rant about details here but perhaps that's what you're here for.
The w/d gleud to wood-thingy left a Un joined surface at the bottom of the stones. I didn't want to touch the joining ends again but a tiny chamfer solved the problem. Still further flattening was needed, so thanks naniwa for supersoft superstone 1000. Like that 3 stone flattening thing but with a twist. Going slo was key. 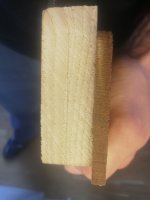 So the stones needed some substrate, and I happened to have quartersawn teak at home so why not. If you wonder what that might be, look at the rings in these pieces. The brown teak to the right is quartered, and the thicker ash to the left, is not.
Having the rings in a certain direction leaves you with wood that moves less.(read boat decks) Don't want to do end up with a banana in the end you know... 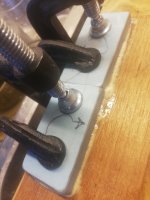 Some nasty isocyanate glue. But it works both with the stone AND the teak, that can be problematic to glue to it self due to being rich in oil and gunk and such. 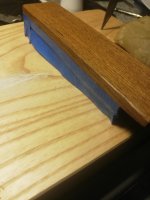 Some length adjustment was needed, some chamfering, some sanding of the sides and scraping off glue residue. Masked the stone with tape and gave the handle a coat of Danish oil, som more lapping was done to the topside, and that's that. Getto superstones.
If you "can't feel the glue joint" in secondhand dropped coticules I'd say it's nearly non existent on these. So far any way! 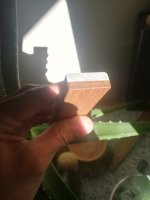 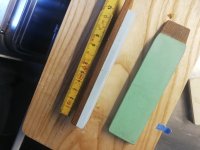 Conclusion: you loose some and you get some. More surface area, less actual stone...
Took an hour, maybe two in actual work time, plus 3 h for the glue up and leaving the Danish to cure over night. Totally worth it.

"Surface expansion" might describe more accurately what I was chasing more than "getto". Diy, homemade, call it what you will, to me it breathes affordable shortcut to the experience plus honing your skills so to me it remains dope, plus the aforementioned term.

This sounds like a cool project that worked out nicely!

Can I ask a (possibly dumb) q. here though? I'm only familiar with Naniwa branded SS... what are these two little stones that you got originally? Is 'superstone' a more generic term than I thought?

cotedupy said:
This sounds like a cool project that worked out nicely!

Can I ask a (possibly dumb) q. here though? I'm only familiar with Naniwa branded SS... what are these two little stones that you got originally? Is 'superstone' a more generic term than I thought?
Click to expand...

They are sold as naniwa nagura stones, however I read somewhere that they are of the same stuff as the Superstone. This doesn't really make them anything else than what they are from the start. Behaves like SS in every way from the description anyhow.

In short, it could be described as an assumption

One last thing that's kinda funny about this, is that at the moment...the two stone surfaces both comes from the middle of the stone. In the future, being a really thin flake of a hone, you'd be honing on the top, and the bottom of the original stone, at the same time.

Singing in the brain said:
They are sold as naniwa nagura stones, however I read somewhere that they are of the same stuff as the Superstone. This doesn't really make them anything else than what they are from the start. Behaves like SS in every way from the description anyhow.
Click to expand...

Ah gotcha... Clever idea and execution of yours! Are they quite fine grit?

I get the impression that SS are far better for razors than knives. I've only used a few - 3k which is trash. 1k which is ok, but not great. And 400 which is quite good.

(But that relates to kitchen knives, and the reason I don't like the 3k almost certainly wouldn't apply to razor honing.)

Green one is 400, blue is 1000 grit. Managed to saw past most of the grit stamp on the blue which was neat.

Singing in the brain said:
Green one is 400, blue is 1000 grit. Managed to saw past most of the grit stamp on the blue which was neat.
Click to expand...

Ah... I've tried both of those before then! 400 in particular is a really good stone (IME).

It's totally a decent stone. I'd prefer other midrange stones but having the 400 in a smaller format makes sense for certain applications.
You must log in or register to reply here.

Sunday at 2:46 AM
Singing in the brain

B
What's the likely element I need to fix re: sharpening?
2

In Pursuit of the Devonshire Oilstone