which razor I should to buy? Merkur 34C\Parker Variant\Merkur Progress

Invicta said:
It seems to me your blade angle is wrong if the blade is not cutting and you are getting razor burn. Also, you need multiple passes so that you get gradual reduction. By the time you complete 3 passes you should have a very close shave without cuts or razor burn. Don't buy a new razor because your technique is poor; the DE89 is very capable of giving you a close shave. Here is some good advice on blade angle; Blade Angle | Badger & Blade
Click to expand...

I agree. All things being equal, I don't think the razor is the source of the problem. Both the EJ DE89 and the Merkur 34C are excellent razors and often recommended for beginners to DE shaving.

That said, I have all three, and while I enjoy them I would have to give the nod to the Variant on the basis of better knurling on the handle. While it and the Progress give very similar shaves, the Variant is easier to hold when my fingers are slippery from shave soap/cream.

What blades are you using?

What shave cream are you using?

Which one have you been most comfortable with?

Technique is a huge factor. But sometimes technique won’t make up for a bad blade. And good soap/cream can really increase comfort.

I’ve encountered a few that blades that felt like I was fighting through the shave. And against the grain was painful.

Good blades matched with a good razor will give you a comfortable shave.

I think you have a good razor. And you’re working on technique.

Try a different soap or cream with a pre-shave product. These products can really increase comfort and overall shave experience.

Go with 34c to try something different. It’s a good value.

It made a huge difference to me,I didn’t like the de89 before I tried the shims.
I really like to feel the blade on my face, (bigger blade gap) I get much more feedback of the blade.
I’ve been using a regular handle Progress for about the last 3 weeks daily. And on setting 4.5 For first pass wtg didn’t leave a whole lot of whiskers left to mow.
I’ve been having great shaves with my progress.
I bought 600 voskhod blades and
They are perfect for me.
The great Mantic59 said they preform very well with a middle of the road blade. I can second his wise words.
A perfect and now a very cheap daily combo for me.
Cheers Ben

BenBest said:
It made a huge difference to me,I didn’t like the de89 before I tried the shims.
I really like to feel the blade on my face, (bigger blade gap) I get much more feedback of the blade.
I’ve been using a regular handle Progress for about the last 3 weeks daily. And on setting 4.5 For first pass wtg didn’t leave a whole lot of whiskers left to mow.
I’ve been having great shaves with my progress.
I bought 600 voskhod blades and
They are perfect for me.
The great Mantic59 said they preform very well with a middle of the road blade. I can second his wise words.
A perfect and now a very cheap daily combo for me.
Cheers Ben
Click to expand...

You've basically created a Gillette NEW SC. If you like a lot of blade feel thats most likely even smoother than using the two shims, you may really enjoy a Fatip.

Right now I'm using Edwin Jagger DE89, and each time i shave against the direction i get cuts and it does not matter what blade I use (i tried few brands) it always happens to me . And I gently shave and do not press.
*At the end of every shave my face burns.

*Another thing I should note:
I feel like I'm a bit fighting in the first pass (With The Grain), and i need over those areas a few times for it to cut.

my prep: Hot water with a face for a minute and a half (in the sink, not a shower)
And I use a simple shaving cream I bought at the local supermarket with omega boar shaving brush.

I have thick and dense bristles + sensitive skin that tends to razor bumps and cuts (I am cut only in the last pass against the direction of growth).

*My main dilemma is more between Merkur 34 and Parker Variant,
the price of Merkur Progress is expensive ,But if you tell me it's worth the price then I'll buy it. (the price is a bit factor)
So between the three merkur 34C , parker variant and Merkur Progress, which razor i should to buy?

You might want to get a better shave cream while your LOOKING shopping for a new razor a cream or soap that has better slickness and a easy to make a thick & slick lather for you, & see if that helps & cuts down on the cuts and nicks you keep getting it might help,,, forget the cheap store shelf brand shaving cream and get one that has good skin protection with good slickness,, look at reviews on different shave soaps on amazon.

I love the Variant, it’s an amazing razor.
R

You indicate that you have a thick, dense beard; that describes my beard as well. With such a beard, I have found thaat I need either an aggressive razor, or a very sharp razor blade. The EJ DE89 is a mild-moderately aggressive razor. I also have one. It works well for me as long as I use a very sharp blade. The problem with using a less sharp razor is that there will be a tendency to shave with pressure to get the blade to cut. With knives, the saying is that you are far more likely to get cut with a dull knife than a sharp one. The same thing applies to razors. Although you have tried a variety of razor blades, you did not state which blades you have tried. Very sharp blades that work for me in the DE89 are: Gillette Perma-Sharp Super, BIC Chrome Platinum, Gillette Nacet, 7 O'Clock Platinum Black, Personna Israeli Reds, and German Wilkinson Swords.

When I first got my DE89, I had a difficult time finding the right shave angle to allow me to shave without irritation, nicks, and cuts. However, once I figured learned to shave with a more shallow blade angle, I got good shaves. I now have both a DE89 and the Muhle R89 which has the same head. I use these two razors when comparing blades for sharpness and comfort.

I do not have a Merkur 34C, so I cannot comment on that one. I do have a Parker Variant. Being adjustable, you can go from very mild to very aggressive. The "best" setting will depend upon the blade you use. I normally use it on a setting of 3 1/2 out of 5 with a mid-sharp blade, not the very sharp blades I prefer in my DE89. The Merkur Progress is the razor from which Parker patterned the Variant, so they will be similar. One word of caution, the Variant is a heavy razor. I love heavy razors, but some consider them to be unwieldy.

Either the Variant or the Progress should work. Start at a low setting and increase for each subsequent pass.

How is the search going?

shaveSymptomatic said:
I've own both progress and variant, my vote would be for the variant.
Click to expand...

Agreed. I have both as well. They both shave similarly for me, but I would give the nod to the Variant because of a better grip. The Progress gets slippery when I have soapy hands, and I have to use some alum on my fingers to get a good grip. No such problems with the Variant.

The Merkur Progress has been manufactured since 1955.

That's why Parker tried to copy it a few years ago. 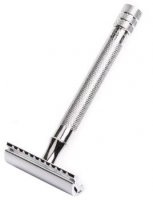 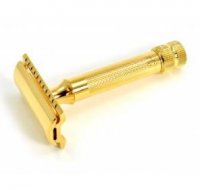 a good choice is the YaQi DOC (it only "looks" aggressive): 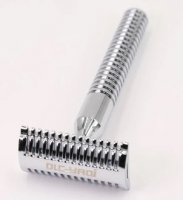 I don't like adjustables so i can't recommend any

Contributor
having used all three, the Variant gets my vote, though all three are excellent razors.

I have all of them. I have Merkur 34c as my daily shaver. Parker Variant is an amazing heavy razor but aggresive and you have to follow all the rules and mainly the "no pressure rule". On the other hand Progress is an efficient great razor and on my face really "sweet"! And i want to say that maybe Variant and Progress look alike but Variant Shaves and gaves you the feeling of a Merkur Futur!

Invicta said:
How is the search going?
Click to expand...

Right? I wish follow-up posts were a thing. I’d love to know where he landed.

Earcutter said:
Right? I wish follow-up posts were a thing. I’d love to know where he landed.
Click to expand...

Fusion Proglide I would venture!
J

Like many others have stated, the DE89 is a mild razor that begs for a sharp blade. Before plopping more money on a different razor, try some feathers, kai, bic chrome or personna reds if you haven't already. Those aforementioned blades work well for me in the DE89. Either way, good luck in your venture
D

Problem with variant is I had to buy three of them
on Amazon to get one that had perfect fit and finish (blade gap evenness especially). But free returns, so no biggie, and it was worth it.

Merkur 34C is a comfortable razor that you can use any day. I still enjoy it every time and I'm amazed at its performance.