What style and brand of sun hat do you wear? I've been wearing a Dorfman Pacific broad-brimmed Tilley hat.

Nothing fancy - we don't get a lot of sun here in Wales! A Marks and Spencer paper trilby.

Never been a hat guy in any capacity, maybe a beanie in the winter but that's it.

Ambassador
Painter’s cap today (as I plan to start the exterior of my house)!!

Moderator
I have I think 3 custom made hats from a local Millinery called the House of Macgregor. If you are ever in the Dallas area check her out.

I've been wearing a Tilley LTM6 Airflo for a few years now.

A random ball cap (sometimes with a kerchief) out and about/on the range most the time.

This one by Columbia (Ball cap with integrated head/neck cape al la French Foreign Legion) when hiking/on the water for real.

Wicking, fast-drying, and with UPF 50 sun protection, this hat covers you head and neck.

Qualifies! Mine's so old, does not have a web site. Just a phone number.

For the Netherlands I wear an old orange worn down bleached orange fish hat or an old bush hat when painting the house etc. And a hagglofs blue rain hat when needed. So practical if you wear glassss

in the tropics I have got two Tilley airflos in blue and red... as a dutchie would have loved an orange one though.

Contributor
I bought a Lanzom wide brim roll up hat last year, haven't looked back. It was mercilessly crushed on our return flight from Jamaica in December and is still very wearable. It's a paper hat, soaks up my sweat and looks pretty dapper.

A well worn Mets cap that I bought around 1985. I like to rock the Oscar Madison look around the house. 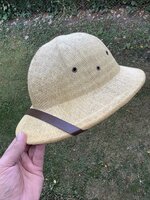 Tilley LTM9... twelve years old, now discontinued, look at all the mesh! I wear this in the morning summer sun, pounding miles for fast exercise, and when I need a sun hat for traveling. This incredibly protecting hat has seen many, many miles and days in the intense sunshine of the deserts, plains, all over. An occasional wash in the machine, hang dry, this hat truly performs! 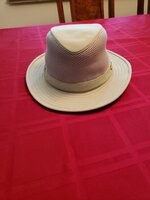 Here it is, the Tilley T3, my first of two Tilley models worn all these years. The T3 is my outdoor hat while on the high peaks, backpacking and on the rivers and water while sailing. This one particular hat is an eight year old replacement for the original one that I beat to heck for many years while on the peaks. Tilley replaced the worn one.. complimentary... thank you Tilley. 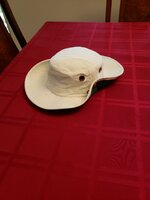 Stetson Carson Straw... my hat that I wear all about town during the summer months. Love this hat, fits very well, breathes OK due to the air holes. This one is about fifteen years old and still looks great. 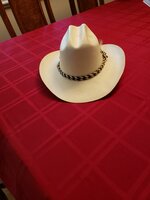 If you're in the intense sunshine where you live, wear a good, protecting hat to protect your head, face and skin from the UV's. Wear what you like and enjoy.

This summer I’ve been wearing my Sterkowski linen flat cap a lot. Wonderfully versatile hat that goes with most every summer outfit and keeps the sun off my noggin.

Later, I found out that my Dad had also bought the U.S.-made hat. Here it is, after a cleaning:

The Korean one became my utility hat. I wore it to cut firewood, mow the lawn, build a porch, etc. until it finally fell apart.

Meanwhile, my Dad had been wearing various caps, fedoras, Panama hats, and a couple of Stetsons since the 1920s. Then, sometime in the '80s, he bought a Tilley T5. I liked it so much that I tried to steal it from him. He responded by buying me my own Tilley T5. We buried him with a few of his favourite things, including his beat up old hat.

Here's mine, still pretty much pristine:

Moderator
When I’m working outside I wear the Leather Brama I picked up just over a year ago. Otherwise I just throw on a ball cap when running out the door.

These pics are from when I bought it last year. 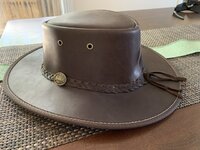 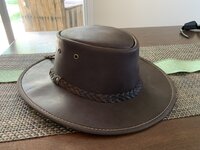 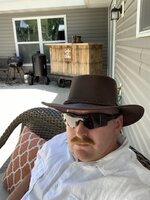 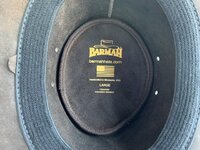 Camo isn't your thing? They come in solid colors. My coyote brown one is nicely sun-faded.

Usually my choice when traveling, or when it can be lost overboard or stolen. $12, good enough for Uncle Sam. Soak it in 3M water repellent and bug spray without fear of wrecking a $70 Tilley.