Porridge made from coarse bulgur wheat with some flax seeds, pumpkin seeds & half a pear 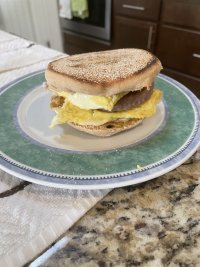 Porridge made from coarse bulgur wheat with some flax seeds, walnuts & crushed pineapple.

ChiefHA said:
Been one of those mornings so my leftover lasagna became my breakfast instead of lunch...
View attachment 1309210
Click to expand...

Like the dinner I posted about, for this morning's breakfast I was on a mission to use up leftover cheese sauce I had made for mac-n-cheese. Nothing special, just two pork sausage patties on a bed of toasted homemade bread. This was covered with sautéed mushrooms and three over-easy eggs and then drowned with cheese sauce sprinkled with chives. 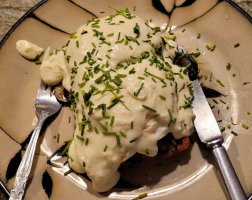 It may look like a mess but it was not half bad. Not something I would suggest having on a regular basis as it is about three days' worth of calories in one meal!

Toast on the edge of burnt, raspberry jam and a mix of English Breakfast and Earl Grey tea. Satisfying. 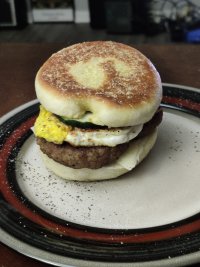 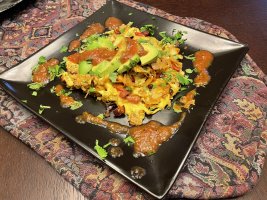 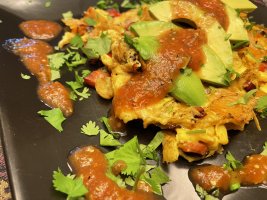 Avocado, harissa, a squeeze of lemon, and Maldon salt on toasted whole wheat and molasses bread chock full of walnuts, pumpkin seeds, and flax seeds while dreaming of eating an omelette everyday.

Nothing special about this omelet with peppers, scallions and fresh basil, except for the fact I used shredded sharp white cheddar as opposed to my usual smoky Gouda. 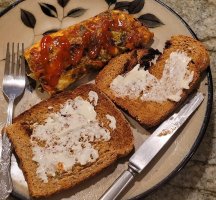 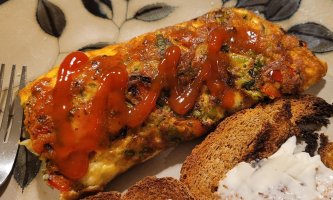 Topped it with serrano - basil hot sauce and ketchup. 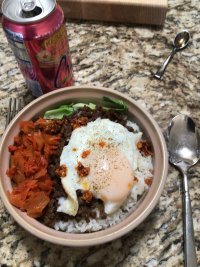 The indisputable power of the EGG, just one makes anything breakfast!!!

My standard fare for breakfast made just a little more special because I used fresh eggs from a friend's farm in Feurabush, NY. 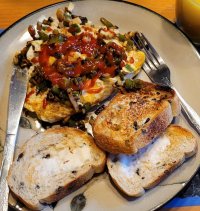 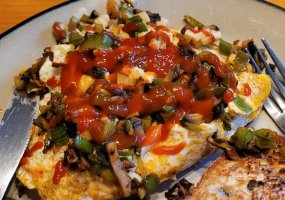 Added some nice toasted black olive bread and a glass of OJ. 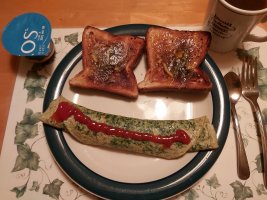 Tried a Gordon Ramsey recipe this morning with mixed results. I pan seared a mix of grated potato, onion and spices in an iron skillet. When it came time to flip the hash brown over it definitely did not come out as easily as it did for Gordon. Then again he used a stainless steel pan, maybe that made the difference.

Anyway, after browning both sides of the hash brown I sprinkled some skillet fried pork sausage over it and cracked three eggs on top.

Covered the eggs with some grated Asiago cheese and bread crumbs and stuck the skillet under a broiler until browned. 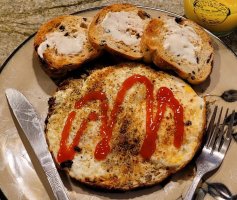 Here is a shot of the interior with the sausage - 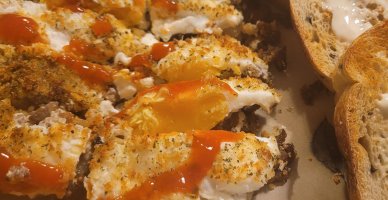 Cooking up the normal Sunday breakfast of sage sausage gravy, fried biscuits, potatoes O'Brian with scrambled eggs and I score a double yoker, have seen one of these in a while... 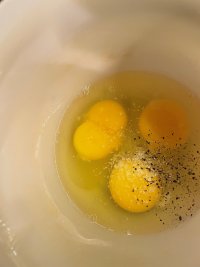 Porridge made from coarse bulgur wheat with some flax seeds, walnuts, blueberries & chunks of pineapple.

This morning was an omelet made with smoky Gouda, shallots, and fresh cayenne pepper from a friends garden. Topped the omelet with salsa, sour cream, and a few slices of avocado (that appear just about ready to expire, but still tasted OK). 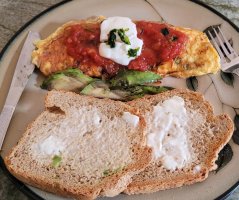 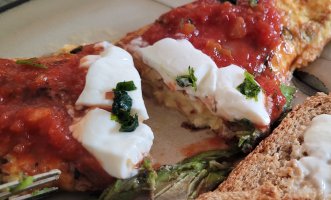 Tim
You must log in or register to reply here.