What's in your pocket today? 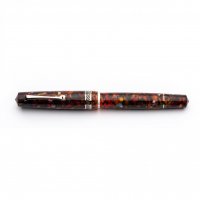 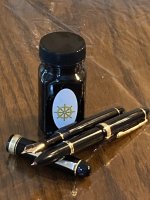 Looks like Captain's Choice is getting into ink. What's the scent? Bay Rum? Land Ho?

Dominic said:
Looks like Captain's Choice is getting into ink. What's the scent? Bay Rum? Land Ho?
Click to expand...

Bay Rum ink? Sounds oddly appealing. No, actually the story behind the ink is that Organics Studios is made as a side-hustle by a chemist in Maryland. He literally makes all the ink in his backyard shed and sells it at Bertram's Inkwell, a local pen store. Here's an article the Washington Post did on him a couple years ago: https://www.washingtonpost.com/loca...6fb5e6-e397-11e9-a6e8-8759c5c7f608_story.html

Anyway, he has this line of ink called the "Master of Writing", one of which was Hemmingway's Santiago Sea. The bottle had a little picture of Hemmingway. Well, turns out unlike most of the old, dead dudes, Hemmingway still has a very active estate that closely manages his likeness. I don't know what legal niceties were exchanged, but the short of it was that the guy making ink in his backyard lost and he had to strip all pictures and mentions of the author. So, the bottle has a steering wheel now. Or whatever they call on old timey sailing ships. I'm sure there's a proper name. Maybe we'll go with "Cat O' Nine Tails" wheel.

P.S. Man, that photo sucks! I've got redo that one.

I think that carpentry pencil might be a fake. It doesn't say DeWalt on the side. 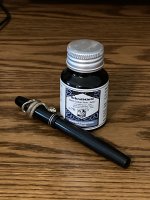 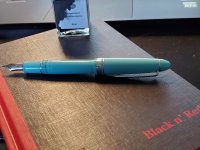 Sent from my SM-G991U using Tapatalk

I'm down to only three inked pens, as I dither, trying to decide whether to refill them when they're empty, or cycle in something else.

Today I mostly used this Pilot Custom Heritage 92 with a FM nib; the ink is De Atramentis Cyan Document ink. I already had this photo of it, and the ink, which was taken a couple of weeks ago. 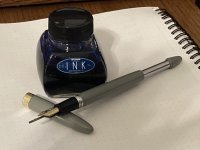 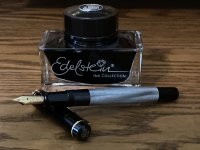