What soap has the best container?

Tabac for me. The container is great; one you're done, you can just buy a refill. To top it off, it has the best stick container too. It's a winner. Sure, the scent is polarizing, but that is not the point.

Some of my favorites

PannaCrema Nuavia (the original ceramic bowls)
Boellis Panama 1924 Coffret
Pereira Shavery ceramic dish (the dish comes in a nice wood box, too, that I now use for storing blades)
Tabac

Last edited by a moderator: Sunday at 2:33 AM

Any one that comes in a shave stick format.

Ambassador
It's a tossup, but avoid "tins" unless they're aluminum (PdP63).

un the functional model
Last edited by a moderator: Saturday at 7:41 AM

Another vote for Tabac—hands down.

Moderator
For me it's the Art of Shaving soaps. First, it looks great. Second, it is easy to load since there is room to the top. Third, it does not crack if dropped.

Contributor
Though I paid waaay too much for it, the aluminum Cade container is nice. 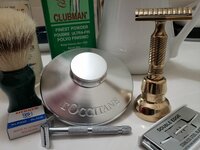 So, for me the best is the plastic container that Barrister and Mann soaps come in. It is not my favorite soap, but I think those containers are the best I have used. Slightly thicker than any other container I have used.

Second is Stirling. Specifically the 5.8 oz size tub. Stirling is my favorite soap brand overall, and the fact they have good packaging helps solidify their spot in my den.

Soap Commander tubs are also pretty good and would be my third place. They will fit a tabac refill puck pretty well.

I will NOT buy a soap if it comes in a metal tin.

I also hate soaps that have labels that come off or disintegrate easily when left wet. I am a shower shaver, so stuff always gets wet, so waterproof labels are a must.

Loving all the responses from everyone. Keep em coming.

Whiterook said:
Though I paid waaay too much for it, the aluminum Cade container is nice.
View attachment 1078929
Click to expand...

The Flying Saucer! I want one!

If you count vintage then Old Spice was the best back in the day except for the lack of a lid.

1Speedster said:
The old Pannacrema Nuàvia ceramic bowls which are no longer used.
Click to expand...

My favourite container is the wooden bowl but since you don't see these for artisans I would say the ceramic bowl that Nuavia came in would be it for the artisan side of the house. I didn't realize they changed to the same jar as MdC until I came back here recently. It would have been great if they had a refill for the bowls.

Ad Astra said:
The Flying Saucer! I want one!

They wanted $30 for that thing and it didn't even come with a sample sized puck. I felt foolish buying it but I wanted the soap and needed a container.

Even if it's a great soap? That wold be a shame. You could always transfer it to another container. Why don't you like the metal containers, BTW? I store my soap in metal or plastic containers and transfer them to a "loading bowl" for use. The metal containers usually stay in a drawer.


dfoulk said:
The large mouth containers from Parkway Plastics are the very best I've found. These are used by many makers including Tallow & Steel and Grooming Dept.
Click to expand...

I agree with @dfoulk. Same containers my soaps from Stirling come in, Parkway Plastics. They sell them at Stirling too. That's where I bought the clear ones below for my bare pucks: 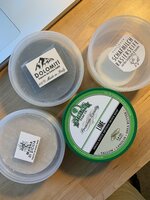 Atlantic59 said:
Even if it's a great soap? That wold be a shame. You could always transfer it to another container. Why don't you like the metal containers, BTW? I store my soap in metal or plastic containers and transfer them to a "loading bowl" for use. The metal containers usually stay in a drawer.
Click to expand...

If it were a really really exceptional soap, then I might. I would probably buy a spare plastic tub from Stirling or Maggards and transfer it, but I haven't found anything that warrants that in a while. I did transfer some WSP formula T soaps, but I think Stirling is just as good, so it would only be for the scent. Same for the old fine refill pucks that came in a cardboard box. Its just a few more dollars to add to the price of the soap, plus the hassle, and right now there are plenty for me to choose from that come in nice plastic containers, so I have moved away from anything in a metal tin.

I dislike metal because:
1. It will be dropped, and it will dent. If the top dents then you can have issues opening and closing it.
2. It will rust. I shave in the shower, thus all my stuff probably gets much wetter than most peoples.

I dont use a lather bowl. I load off the tub, then face lather in the shower.

Actually, I was thinking about this recently because I was trying to decide which bowl I was going to use for what purpose.

For ceramic, I like Tabac. It has a nice heft and just feels like class. The lid is a bonus.

For metal, I like the aluminum tin that LEA Classic shaving cream comes in. It's big (~5.3 oz.) and won't rust.