What is your favorite vintage non adjustable razor.

Gillette Tech. I have 2 Tech heads, both English made. One appears 50's the other is more mid 60's. I find them to be more aggressive, slightly than a current DE89 head.

Side note and slightly off topic, but it may touch on @Beefdrippings experiences with the English TTO's of the 50's as being more positive. I took note of the comment that the handle tightener was not going down the adjustable route of design, as U.S ones were.

What is interesting is cost. I looked at the prices of a U.S Red Tip and an English equivalent Gillette TTO, from 1956. The U.S one cost $1.29. The English one cost 6 Shillings and sixpence. (Back in the day here, there were 20 shillings to the pound, each of 12 pence.

I got figures from the British Parliament record called Hansard. In Feb 1956 it was stated that the average weekly wage of a man was £10/3s. In the States I located a Census report of earnings from almost the same month. It gave it as a yearly rate but broken into weekly earnings it was $68. Based on earning power it seems the U.S razor cost around a third of the price of an English razor. Contributor
I'm gonna have to go with my English Tech, at 62 grams it is my heaviest and smoothest shaving tech. Like @Beefdrippings has said, the razors made across the pond were made noticeably different.
My New SC is a truly wonderful razor, everyone should have one.
Next would be my 54 Super Speed, followed closely by my 55 Red Tip, then my pre-war tech.
I would hate to shortchange my late 40's Aristocrat, truly a capable daily driver, but then I just received a Gillette Old Type set, with both the thick and thin cap from @Tanuki that I haven't used just yet.

I have a feeling my Gillette Old Type with the thick cap will be one of my favorite vintage razors.

Man I need a shave

The Canadian Prewar Tech. Is my favorite its a notch more aggressive than my other techs. I used it today and got a BBS without trying.

This! Or the NEW SC for that matter.

Yes. The only time I could tell the difference is if I had a months growth.

It’s more efficient and more balanced than the 40’s, 56, and 72 Ive tried and owned, I don’t know why. It’s my go-to, occasionally using a 56 Tech, which is not quite efficient enough on my chin yet smooth as butter everywhere else.

Slock said:
The Canadian Prewar Tech. Is my favorite its a notch more aggressive than my other techs. I used it today and got a BBS without trying.
Click to expand...

If you are talking about the one that says 1932 on the baseplate, yeah man ... great razor. And a bit more efficient the comparable US versions. I still prefer the Brits though.

No question, for me it's the Wardonia Standard, made in France and takes a modern blade. It beats anything in my stable including any Gillette, any GEM, any Schick. The only non-adjustable razor that comes close is an even harder-to-find one, the Schotz slant.

The regular Wardonia shaves just as well, but it loses points because you have to modify a blade to use one.

Gillette New SC, just shaves closer with less fuss than most of the other vintage, yet easy on the skin, and super easy to shave with.

BradWorld said:
If you are talking about the one that says 1932 on the baseplate, yeah man ... great razor. And a bit more efficient the comparable US versions. I still prefer the Brits though.
Click to expand...

My number one is my Schick G1 injector, followed closely by my 1941 Schick E. Coming in 3rd would be a new Baili “Tech” clone (with Feather blades). . 4th is my GEM g-bar heavy flat top. I guess I’m mostly a single edge guy I’d have to go with a Canadian PreWar Tech followed by any other type of Tech.

To name just one is kind of tough - I guess my 1941 Ranger Tech that was re-plated in "shiny" nickel. 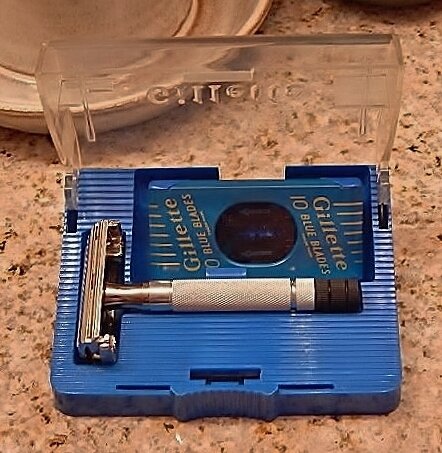 My favourite is my dad’s old British Set No 59 ( I think, correct me if I’m wrong) 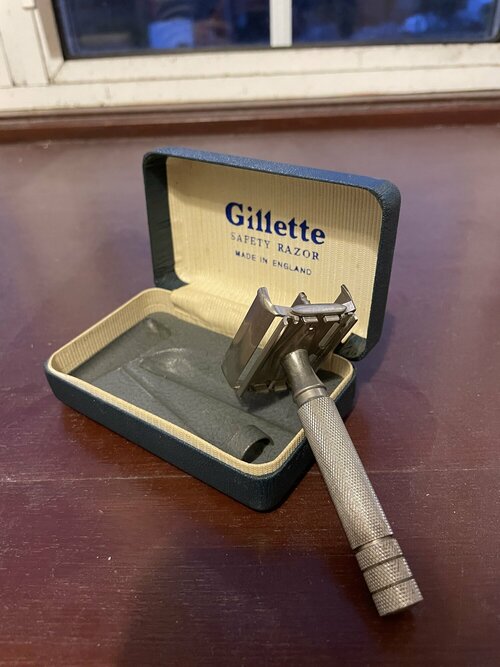 It’s my favourite cos it’s the only vintage one I own.
You must log in or register to reply here.

Your Favorite High End Adjustable? & Why?
2