What is the best cartridge razor?

The best cartridge razor was the Gillette Techmatic!
It only had one blade, so none of the problems with multi-blade carts, such as ingrown hairs, irritation, rash or razor-burn. An enclosed band also meant no weepers. The high-grade stainless band would provide more than week's worth of shaves per section. Later cartridges even had blade exposure adjustment!
Originally rather expensive in its day, the carts can now be found quite cheap on ebay.
I shave with one regularly and love it.
ps. don't believe all the negative rubbish from people who have never actually shaved with a Techmatic! 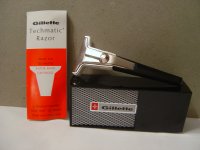 wetshaving-newbie said:
today i wanted to try the old fusion proglide flexball which was resting unused since last january and with my surprise by applying the DE wet shaving techniques i got probably my absolute best shave. An easy BBS in 2 passes WTG/ATG and no irritation. I'm impressed.
Click to expand...

but as another user pointed out i have a lot a redness and razor bumps. I don't get them with the hydro 5 and DSC. I even have a "healthier" shave with a humble Xtreme3

Shaving like a boss said:
Ive tried the bazillion blade, supermatic, Hi Def, solid unobtainium razors. And to tell the truth, IMHO the humble TracII is the best cart razor. Its simple, efficient, and gives a DFS every time with almost any reasonable type of prep. Carts can be had for not a lot of money and they are easy to find. I still prefer my DE, but I keep my 40yo TracII in my rotation.
Click to expand...

I wholeheartedly agree.
I spent £1000’s on DEs, SEs and straights but once I started headshaving it turned out that Trac II rules them all.

And it’s very collectible since there are literally hundreds of different compatible handles and blades.
S

Best cartridge razor on the market is Gillette Fusion proglide, and Schick Hydro 5.
Mach 3 is excellent but (here in my country at least) it costs as much as Fusion so I don't think it's worth it anymore, considering the 5 blades cut much better. Problem with all these high end cartridge razors is that the cost is outrageous.

If I do want to use a cartridge/disposable, I found that the only cost effective option is the good old BIC disposable (I like 2 blades best). And out of all disposables, I found BIC to be number 1. Compared to Gillette disposables, the BICs have a higher quality blade that cuts very well. I'm able to get a very smooth shave with a BIC 2 blades.
You must log in or register to reply here.
Share:
Facebook Twitter Reddit Pinterest Tumblr WhatsApp Email Link
Top