Wet Shaving Products- Mamacita! Where Have You Been All Of My Life?

Just came in the mail yesterday. I didn't have a chance to shave yesterday but I splashed a bit of the Tobacco on my face anyway. Then a miracle happened. SWMBO actually LOVED the scent. This morning, another miracle...she LOVED the Sandalwood.

The scent of both lasted for several hours and the mellowed nicely. The Sandalwood is beautiful and reminds me of a fresh jar of AOS Sandalwood cream. The Tobacco is somewhat reminiscent of a milder Knize Ten. Both are winners IMO.

I have a feeling there will be bigger jars of this stuff being ordered very soon. 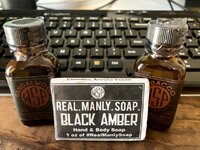 They make great products. My favorite scent is barbershop, but they’re all good. I used to live in AZ and their production facility/store front was close to my work—it was awesome to go in and smell everything. Nice people.

Oh man I have so many of their line. But sandalwood and tobacco are my two favorite
Except dragons blood. Barbershop, black amber, Blackbeard, citrus blast hmm what am I forgetting lol

Yep, big fan of WSP. A bit pricier than most (especially if you try their Signature Scents), but so, so good.

I had a chance to shave yesterday. Horrid shave, as I had gone a week without shaving, ignored my prep routine and was using a pretty old blade. Plenty of weepers and nicks. I looked like a carved ham.

I was anticipating pain as I splashed a bit of WSP Tobacco on my face. Thankfully, I received a calming ting of relief and my face felt great. Any signs of a bad shave quickly passed and the scent of Tobacco settled nicely.

Again, my wife commented how much she liked the scent a few times during the day. Even 14 hours after it was applied, there was a sight lingering scent left on me.

The mere fact that SWMBO likes it would normally be enough for me. The added bonus of feeling great makes this stuff a true winner.

Just placed an order for the 100ml bottle of Tobacco and a 6-pack of the bar soap. If the soap works as well as the AFS, I'm going to need a second job to support my spending.
Last edited: Mar 6, 2021

Contributor
My thoughts exactly. I just used my first WSP soap Gaelic Tweed (Formula T) earlier in the week. It was awesome. Great base, great fragrance and the splash is somehow mildly scented, but persistent. I could catch whiffs of it all day. When they come out with some spring / summer fragrances I'm going to pick up Barbershop along with the seasonal.

WSP is one of my favorite soaps. I have many of their scents. I just tried one of their aftershaves to see if I liked it.....Gaelic Tweed.....it is very nice.

Oh yeah, WSP Sandalwood is wonderful. It's the standard by which I now judge sandalwood splashes. And their Formula T soaps are the bomb, too.

Contributor
I have the rustic barbershop and love it

MyOldKentuckyHome said:
I've been resisting the temptation to but some of their bar soaps
Click to expand...

Just bought a 6-pack of their soap along with a large bottle of their Tobacco AS. The soap smells absolutely glorious.

That's exactly what I told myself. Unfortunately it never seems to work out that way.

I stil hope they come to europe getting alcohol based stuff is a problem to ship but asb of wsp is also a long smell.
Tip they also offer a nice sample travel sized soap.

Ivo4u2 said:
I stil hope they come to europe getting alcohol based stuff is a problem to ship but asb of wsp is also a long smell.
Tip they also offer a nice sample travel sized soap.

I'm really loving all of their products so far. Bar soaps and aftershaves. Once I use up my stick of La Toja, I'm going to order a couple of their shave soaps too.

I may not wait for my La Toja to get used up.

Their shave soap tins leave a little to be desired, but the product is top shelf for sure.

My soap/splash stash is evenly divided between WSP and Barrister & Mann. I've tried others, but those are the two I come back to even after I sell the third-party stuff. Their tobacco soap/ASP is top knotch, as is their Fresh Vetiver. I'm awaiting a shipment of their Barbershop soap and Barbacool splash from Maggards. I've contacted WSP a few times to ask if they would release under their own label the Royal Fougere they put out for Asylum a year or two back, but never heard back. If ever they do I will buy a gross of it.

And definitely don't sleep on their body soaps. Their tea-oil shampoo bar is my go-to at this point.

Well, received the Maggards box today and looks like there was a little mix up - they sent me the Barbershop shave cream instead of the shave soap. This will be the first time I've used of one Lee's creams. This should be interesting. Scent is nice.

I placed the shave cream tub next to my recently kaiboshed Olympus tin. So yeah - there's a little bit more volume involved. Curious to see what the rate of consumption is on the cream. WSP soaps take me a loooooong time to finish off.

Let us know what you think of the cream. I've been more of a soap user of late, but still like whipping up a good superlather now and then too.